Looking back over the run down the stretch to the playoffs there have been a handful of costly special team errors.

There were missed blocking assignments resulting in a blocked punt.

Fortunately, in a meaningless game, Ottawa exposed us on a punt for a long completion that we can learn from.

These mistakes must be cleaned up if we want to have a better chance of going deep into the post season. I'm sure Craig Butler will be watching the game films to do his best to prevent any repeats. If there is ANY doubt as to blocking assignments or coverage, take the time out and reset.

Our downfield kick coverage has been superior and I don't see why this would change. Expect more solid play here.

Seth Small has been tremendous this season. Keep it going...

I have zero faith in Domagala. Despite the theory that his punts are suffering due to inconsistent snaps I have seen nothing that gives me confidence that he can hit long or accurate punts, especially when it is really needed! IMO his time has come and gone and he should be replaced. Blake Hayes at 6'6" and 225 looked much better last game then Domagala has all season. My vote is to start Hayes. He is also listed as a global player.

I have had the same "concerns" with Domagala since he signed, no matter what position he plays.

Domagala is not a big concern, for me.
His ability, as a punter, is, IMO, not far enough behind other regulars in the league to call for replacing him, in the playoffs, with another punter, taking a roster spot from an American. And, he's certainly a good, dressed, back-up for Small, should our FG & Convert star suffer an injury.

Domagala is not a big concern, for me.
His ability, as a punter, is, IMO, not far enough behind other regulars in the league to call for replacing him, in the playoffs, with another punter, taking a roster spot from an American. And, he's certainly a good, dressed, back-up for Small, should our FG & Convert star suffer an injury.

Frankly, we're stuck with him.
He's the second-worst punter in the League.
IMHO, he should NEVER have been on the roster.

Responding to the original post, the playoffs are when Coaches pull out all of the stops like, reverses or sometimes fake reverses on punt returns, unusual alignments for block attempts etc.

Our coverage teams will need to be alert to that . . . & if the game is in jeopardy, our own return teams have to have such options available to them as well. Those "splash plays" on ST's can totally change the outcome of an otherwise tightly contested game.

Good point! The Cats will need either an ST's TD or a Defensive TD to get to the Cup and another one or two to win it!

I think this is it.
Our season's first, and only! 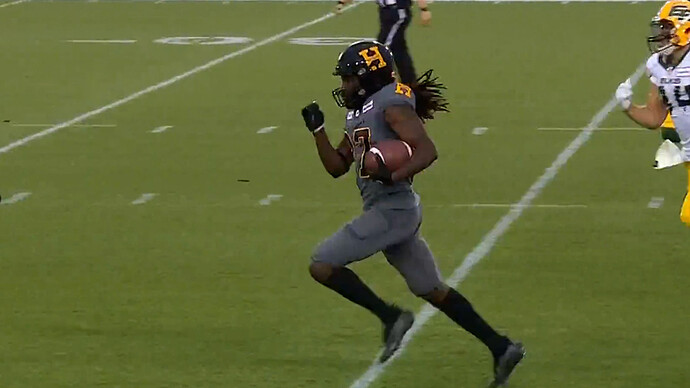 Lawrence Woods III returns a kickoff for a touchdown, for his first touchdown of the season.

Domagala kicks in a wind tunnel at THF and is doing quite well according to the coaching staff who keep sending him out there .

that just shows stats don't tell all (or nearly any) of the story.

Woods is very capable of breaking one open if he gets some help. We're due!