Good article. Saw on the news Henry's on crutches + gonna get knee surgery.

Good article. Saw on the news Henry's on crutches + gonna get knee surgery.

Yeah, was surprised by the crutches for sure. I do hope that if he decides to hang em up that this was not forced by the injury, shame to go out that way for a guy who has been pretty healthy his whole career and looks like he still has game in him, but going out on a championship helps a bit i guess.

A Mr. CFL all the way, hope he recovers well enough to keep playing if he wants to and a team wants him.

Great piece. What an ambassador for the CFL game. :thup: :thup: 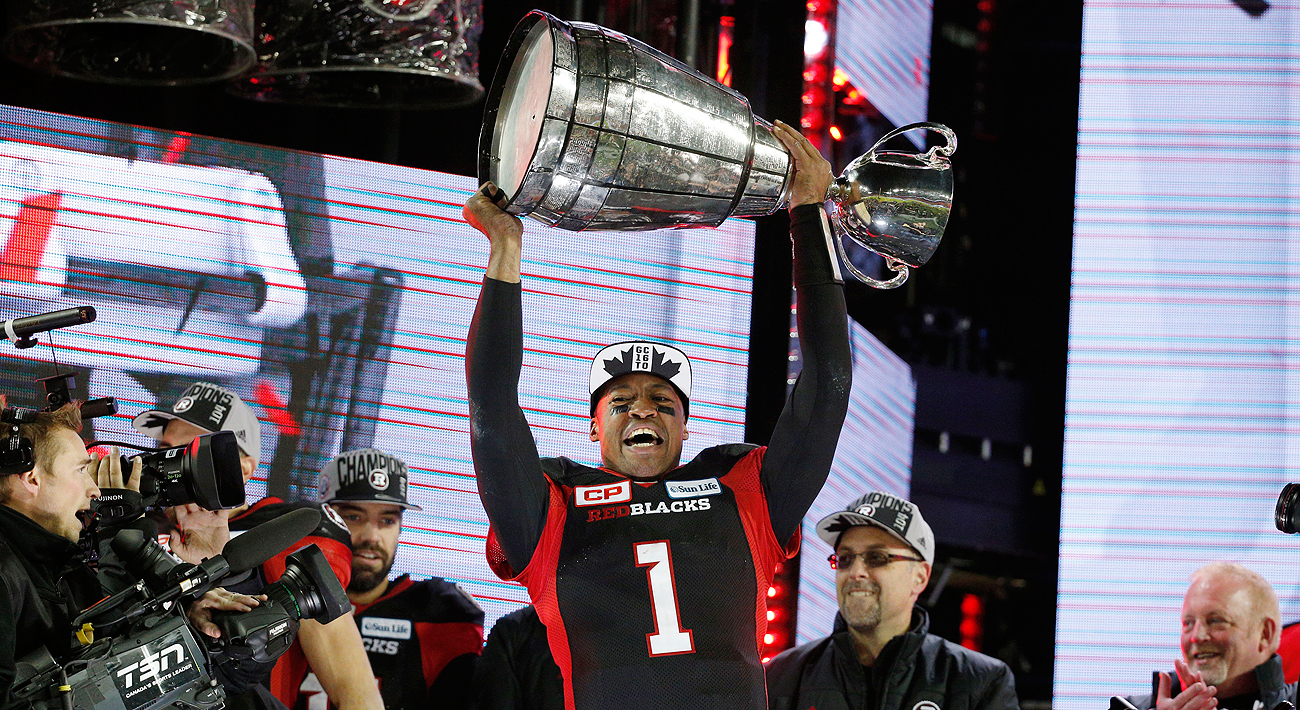 Imagine you’re 41 years old, and playing possibly your last football game ever, and it’s the championship game, the 104th Grey Cup in Toronto. The only chance the huge underdog of your Ottawa Redblacks team has is for you to be great. When you run out on the field for warmups, you think, This is the biggest game of my life. Imagine taking your usual light jog around the field after stretching, and you feel a crunching feeling in your knee, and there’s an audible pop, and the knee buckles, and you’ve got to stop, and it locks up, and you bend down before anyone notices, fake-tying your shoe and gathering your thoughts with a leg that is virtually immobile. You think, Oh no. This can’t be happening. But of course it is.

More: (scroll down through some NFL babble)

Good article and pretty amazing to see the NYT taking an interest in the CFL...but the whole Burris being the savour of Hamilton then being run out of town narrative is getting quite old.

Obie, Bellefeuille and Glenn were the three men who guided Hamilton out of the depths of football hell into a respectable playoff team that came one game short of a Grey Cup appearance in 2011. When they left and Burris got here, he seems to conveniently forget the team went 6-12, which was a massive regression (although a lot of that was not his fault, the defence was horrendous, but he put up most of his stats in the first 9 games regardless) ...people also seem to forget just how bad he was in the 2013 Grey Cup game and most of that season, he didn't give Austin much to be confident about at his age.

Anyways just crazy it seems every story about Burris must include a backhanded comment about how he was "slighted" by the Hamilton franchise and then got kicked to the curb after turning things around. I also think it's a huge slight to Desjardins, Campbell, Hunt and the rest of his teammates when he brings up how he is the one who led the turnaround in the Ottawa and tells other teams to shove it, cus that simply isn't true. That first 2-16 year...yknow when the Cats went to the Grey Cup with Collaros...was awful, but nobody wants to talk about how bad Burris was with no talent around him.

Burris had an incredible Grey Cup game, and I love how much he loves the CFL, but this grudge he holds against Hamilton is ridiculous, not like the franchise fell apart without him, they came one play short of a Grey Cup the very next year. I clearly am just rambling at this point, but just feel like it takes away from his credibility and likability for me because he seems to always want to bad mouth Hamilton when the franchise made a wise business decision that has worked out for both sides, and even better for him so don't get why he is so angry about it.

I get how redundant and angry I sound about someone holding a grudge, but welcome to the internet, really not mad just confuses me why everyone runs with this narrative and thinks he is great because of it. Burris' career speaks for itself, he doesn't need to do any more lobbying and quite frankly never needed to, but I imagine that's just what gets him motivated and fired up to play.

Riders were destined to win that game and were the better team by far ... but do you remember the play (I think Cats were still semi in the game at this point) when Hage snapped the ball over Burris' head and he looked at Hage like a deer in headlights instead of turning around and chasing the ball? Burris just was not in the game that day, nobody from the Cats was really, but I have never seen a quarterback do that in my life let alone a HOF QB in the Grey Cup. It was a microcosm for how that entire game went for Hamilton, and Burris was at the helm.

Regardless that's not really the point, point was that he had his chance to bring a Grey Cup to Hamilton and end the drought but he was a big reason why that didn't happen, so to sit their and throw stones at the franchise after they gave him a chance..and also Austin put full faith in him after LeFevour saved their ass multiple times that year including in the playoffs, just doesn't make sense to me.

In that article his mom specifically states "It seems ever since he’s been up here, he’s gone to a team, he’s made the difference, they get rid of him, he goes to another team, he makes a difference, and they just continue,? she said. “Now we’re going to see what’s going to happen.?

I just don't think that is very factual or true. He came to Hamilton, and the team regressed...then hired Kent Austin, implemented a platoon system at quarterback because Burris wasn't getting the job done, made it to the Grey Cup and gave him the reigns, and got absolutely smacked and Burris was a big part of that loss, and the play I mentioned above is probably the best example of that.

Burris is an amazing quarterback, ambassador for the league and by all accounts a great person...I just don't like when false narratives are created to build a story.

However, the fact is no CFL team in 2013 was going to go into The House That Ron Built and beat the Riders.

That game was decided the moment the anthem was over.

He's getting a lot of exposure