Huge game tonight! Been looking forward to this all week. I’m expecting a showdown and a Ti-Cat win. Let’s Go Cats!

This week seemed like 2 weeks long. Let’s get this done Cats!!

Thanks for the GDT

Sinkfield and John White are the game day scratches

May be some rain tonight

We need this game 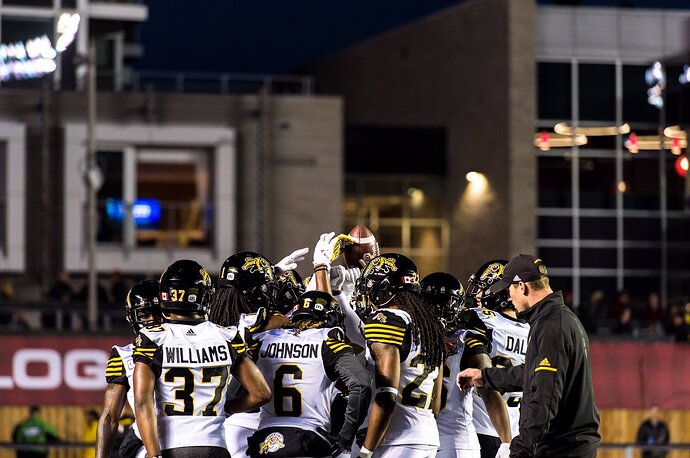 Something tells me McDaniel will have a big game for us. The grizzled, savvyvet.

Probably not familiar enough with the offense. He’s only been here a week or so.

Ticats in all white, OTTRBs in black - looks like the “good guys” vs the "bad guys!

Oh man, this game could go either way. Ottawa has been such a Jekyll and Hyde team this year. The Cats have to play a full 60 minutes tonight.

Absolutely and job #1 right now is shutting down Harris - and Job done!!

OUCH - first penalty of the game goes to our STs for holding. Can’t take as many penalties as they did last week in TO. I put that down to the rivalry and the fact that it was the third game vs the boatmen. But the offense is moving - albeit from very deep in their own zone.

WOO HOO Green with a HUGE run and they are well into OTTRB territory - from their own 18 yd line!

That was a whole new level of awesome from Tasker!

Happy to see our guys with an early TD after keeping the OTTRBs to a 2 and out! Of course they have to keep getting Harris and his friends off the field and scoring themselves! But that should take the crowd out if our D can get another quick stop.

Not very happy with the ref tonight - he is definitely not pro Ti-cat.

But did you see Speedy blocking for Tasker. Way to go Speedy.

Windy enough to need someone holding the ball on kick offs!

Tasker picks up where he left off. But it took him two catches this time to get a TD. Last week - three TDs after three catches!