I would say a one game suspension along with a fine but we’ll see. At least he admitted is was uncalled for. Take a look: 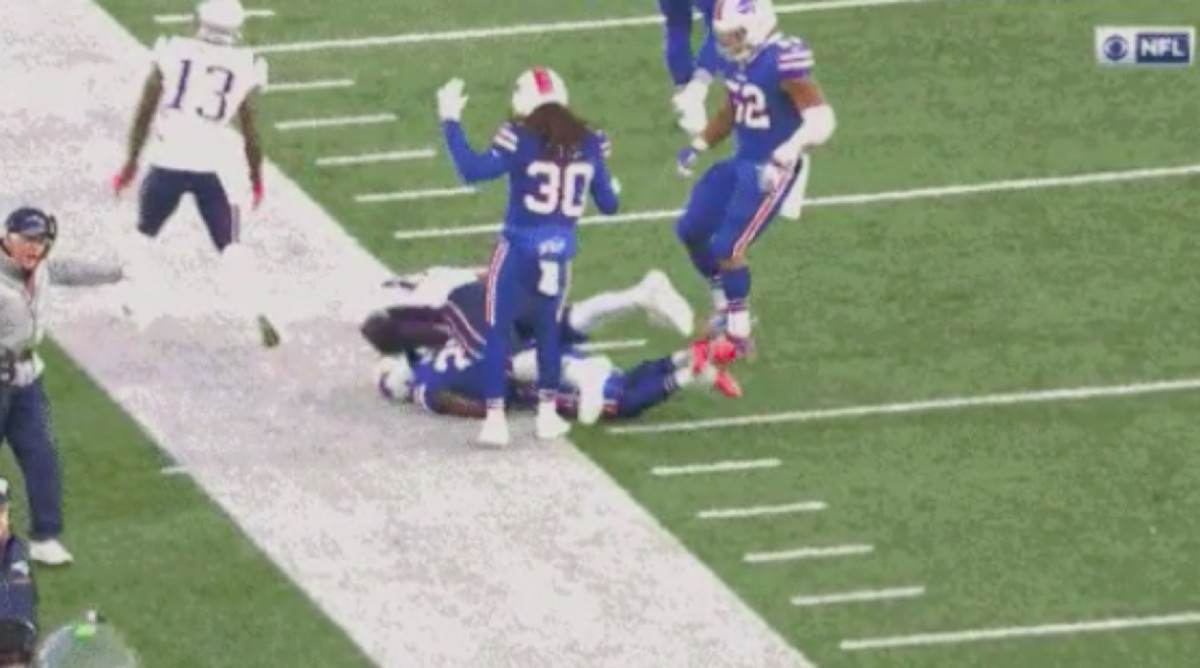 Rob Gronkowski was clearly upset that Tom Brady was intercepted by the Bills.

No way anyone can defend that. Just a plain simple dirty shot.

Hopefully he recognizes it vs pay lip service to it.

Belichick apologized immediately after the game to Bills' head coach Sean McDermott and that was good. From what I understand, Gronkowski is tired of getting pushed around by small d backs that don't get called because Gronkowski is huge as a receiver and therefore he thinks the refs don't call stuff done agains't him enough. Fair enough but you can't go and do that sort of crap.

He did get a one game suspension.

Good and the CFL should keep this in the back pocket for review in the future. Uncalled for even if Gronkowski has basically an uncheckered past from what I understand. If the play wasn't over, that's different, but this play was easily seen as over I would say and out of bounds.

From what I understand, Gronkowski is tired of getting pushed around by small d backs that don't get called because Gronkowski is huge as a receiver and therefore he thinks the refs don't call stuff done agains't him enough

...I don't think it's so much 'pushed around' and it is 'grabbed and tugged on', but I get your meaning Earl, and yeah I think that was the case here and his emotions got the better of him...I did see the post game interview with him and he sounded genuinely apologetic....but the suspension is warranted...

...regardless of his outburst, he might have a point....he does seem to get obstructed a lot more compared to say Jimmy Graham who is both taller and heavier than RG...

I'll take a look at it - and I'm sure the suspension was justified BUT Gronk is correct - he's been abused and late-hit more than just about everyone in the league - just because he's 6'6" and 290 lbs. DBs have to abuse the guy to get him down - they often work in packs of 3 if the initial cut the knees tackle is unsuccessful.

A healthy Gronk probably gives the Pats even money chance to win their 6th Super Bowl. If he's suspended or injured (he injures too easily for a giant) the Pats chances go down somewhat significantly.

I can agree with both sides:

He gets paid VERY well to manage his emotions out there.

Gronk should drop his appeal, and just take the one game. The suspension that Goodell gives just have no teeth, just enough for a few NFLPA lawyers to make some money appealing the ban. If you watched the Steelers/Bengals game last night, what happened in that game was brutal, especially after the Steeler linebacker, Ryan Shazier, suffered a suspected spinal cord injury on the field. The stuff that happened after that was unbelievable, dirty shots and helmet to helmet contact. Those types of hits in the MNF game last night were sickening to watch.

I agree. Gronk should just shut up and move on. On one hand he says it's deserved. Then on the other hand he appeals the tiniest suspension possible?

THIS is why I lose respect for many pro athletes. If he were to do what he did in a bar or on the street (attack someone from behind unprovoked) - he goes to jail. Instead we have a multimillionaire whining that he's being treated unfairly.

Agree sambo with what went on last night AFTER the Shazier incident, shabby.

Iconic, wouldn't doubt though that the players union put a lot of pressure on Gronk to appeal.

Agree sambo with what went on last night AFTER the Shazier incident, shabby.

Iconic, wouldn't doubt though that the players union put a lot of pressure on Gronk to appeal.

Very likely, and it only underscores the issue.

That game last night was just brutal. And it is getting a ton of criticism. It was good to see the ESPN crew making an issue of it even during the game. (video at link below)

“It’s bad for football,? Monday Night Football analyst Jon Gruden said on ESPN during postgame coverage. “There’s going to be some fines, there’s going be some stringent discipline. Let’s just hope a lot of these men are able to get up tomorrow morning and move on with life. Some of this stuff got out of hand tonight. It’s very disgusting and disturbing.? Yahoo Sports’ Pat Forde was blunt in his assessment of the game while giving credit to the MNF team for their critical coverage of the violence. "This is a bad night for football. Really bad.". "It was, however, a good night for ESPN. Sean McDonough minced no words, Lisa Salters asked Roethlisberger good questions in the right order. No sugarcoating what happened."

I thought Lisa Salters asked the perfect question when she interviewed Steelers' QB Roethlisberger on the field immediately after the game ended when she asked 'How do you explain the viciousness and brutality of this game?'
Aerial December 6, 2017, 12:22am #14

Yup, no way around it for sure. Good they admitted it.

Mike Mitchell saying he didn't sign-up for flag football. Pretty intense rant. Tells it like he sees it though whether you agree or not agree with him:

“I was very frustrated with Alex [Smith] and people in the media,? Mitchell told NBC’s Michele Tafoya in response. “Matt Hasselbeck, we’re gonna have words next time we’re on.You don’t know me. And you call me a repeat offender? Two personal fouls over the past three years.?

While some find Mitchell’s point of view and brand of football draconian and dangerous, he gives voice to others who feel the game is under attack and that the violence on the field is a necessary part of the sport that participants have signed up for.

It’s an issue that wasn’t much of an issue, at least in conversation, until revelations over the physical toll football takes on players’ bodies, especially their brains, has come to light in recent years. Before the public heard of CTE, hits that now draw penalties and ire had prime spots in Sunday night highlight reels on ESPN.

Football is clearly at a reckoning. How the NFL and lower levels of football evolve, or don’t, will determine if the game continues to thrive or becomes a sport, much like boxing, that younger generations don’t want to play or watch.