CAL is first to post. Compared to the last weekend's Western Final:

80 Eric Rogers is listed as the starter, ahead of Joe West, who started ahead of Rogers at WR last week. 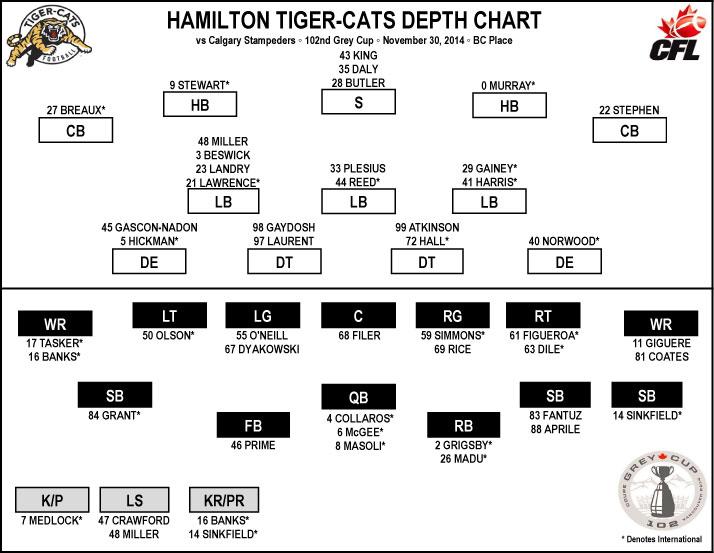 Plesius will be playing and on the game day 44
So who doesn't make the 44 ? Same as last week:import-OT-Marc Dile,canadian-WR-Johnny Aprile.
Exact same game day lineup as the EF for the Grey Cup.
I could be wrong but this has to be the first time all season that we have had consecutive games with no lineup changes on the game day 44.

I don't recall hearing anything about Plessius beyond his not participating in the first of the week's 3 practices. That lack of information would tend to make me agree with you, Mike. If we're wrong, and unless there's other injury news that's been kept quiet, Aprile will be the national reserve and, either way, Dile will most likely, again, be the international to sit out. This is the first time this year, bobo, for the identical 46-man line-up in back-to-back games. If your prediction of Plessius dressing, with Aprile and Dile as reserves, then you'll be correct, as well, with your "game day 44" statement.

This quote, copied from Drew Edwards' late Saturday afternoon online update from Vancouver, adds to the belief I share with Mikefromthehammer that Plessius likely won't dress:

"Although they will still have to drop two players on game day, there were no changes on the Ticats’ 46-man depth charts, announced Saturday, for Sunday’s Grey Cup."

Well we'll just have to wait and see,but my guess is still that it will be Dile and Aprile. I'll be surprised if it is Plesius,but then again last years Grey Cup saw Courtney Stephen as a game day scratch due to injury so you just never know. One thing I do know is that this years version of this team going into the Cup is heads and shoulders better than the team we had in Saskatchewan last year.

I don't have a link, but I think Drew said Fredo didn't practice all week. If true, I think he would be the logical National dropped from the game day roster. Again, he has played so well the second half of the year, I would be sorry for both him and the team if it happens.