If the Winnipeg Blue Bombers had a soundtrack for their season, Handel's Hallelujah would have been blaring over the Canad Inns Stadium loud speakers during yesterday's practice.

That's because, for the first time since July 26, No. 1 quarterback Kevin Glenn and star slotback Milt Stegall were both practising with the first-team offence.

Not only that, but they're pencilled in to play in the 40th annual Labour Day Classic this Sunday in Regina against the arch-rival Saskatchewan Roughriders (5-5).

"I fully expect Milt and Kevin to be able to participate this week," Bombers head coach Doug Berry said.

To say that the Bombers struggled without Glenn and Stegall is like suggesting there's turmoil surrounding the Hamilton Tiger-Cats these days. The Blue and Gold entered August with a 5-2 record, three home games on the slate and a bye week.

Since Glenn (knee) and Stegall (cracked ribs) were forced to take August off, however, they're entering September with a 5-5 record, a three-game losing streak and the backup quarterback, Mike Quinn, long gone after getting cut on Monday.

"So that's a little bit of a confidence boost right there, having those two kids strut onto the field.

Glenn and Stegall will bring not only confidence, but probably better statistics as well, as the Bombers averaged almost 200 more yards of offence per game when they were playing (see box).

Glenn, however, doesn't want to be labelled as a saviour, and Stegall wants everybody to sit back and take a deep breath.

"Everybody's expecting a lot, and that's understandable," Stegall said. "But we're gonna need help from a lot of people.

Glenn, who had arthroscopic surgery on Aug. 10, will wear a knee brace, and he experienced no pain during yesterday's workout.

"You gotta get used to wearing it, but I've been wearing it and working out in it for awhile, so I'm getting used to it," Glenn said.

Stegall thinks getting Glenn back will be a huge boost, perhaps even bigger than his own return.

"I'm not saying anything about the other quarterbacks, but having your starting quarterback is big," Stegall said. "It boosts everybody's confidence, not only on offence but on defence and special teams."

While the return of Glenn and Stegall is fine and dandy, their absence highlighted a problem that still exists: the lack of solid backups.

Berry, in fact, is still troubled by the fact that Quinn couldn't get it done.

"I'm disappointed in that we invested a lot and it just didn't work out with the investment," he said.

"Whether you're in the financial community or in the sport, when you invest time or you invest coaching effort or invest money, you want to get dividends.

"We felt like even though things were happening, they just weren't happening fast enough." 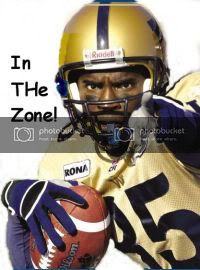 Of course they will make a difference! Milt, Glenn and Roberts ARE the Bombers offence. Without them they are nothing which they've shown in the last three games.

The Bombers MUST win the next two games against the Riders.

nice to see your change of heart cheering for the blue. i am sure it is not self serving at all.

Problem with Stegall now is that it may take him a while to be the player he was before the rib injury, he'll probably play safe and not go for balls like he used to. But his presence will probably help the team overall I'm sure.

yeah, cause stegall is known for taking it easy and playing it safe. i think it much more likely that he gets reinjured for not doing so.

Dad how does one give a 110%? And did I not tell you not to play with needles and voodoo dolls. Wow it seems to be getting hot in here.

THEY ARE GONNA CATAPUIT THE BOMBERS INTO THE PLAYOFFS!!!

Catapuit? Isn’t he the backup goalie for the Moose this season?

Yup great goalie has a brother that plays for the Hitmen!