The Ticats play in Alberta for the second time in as many weeks. 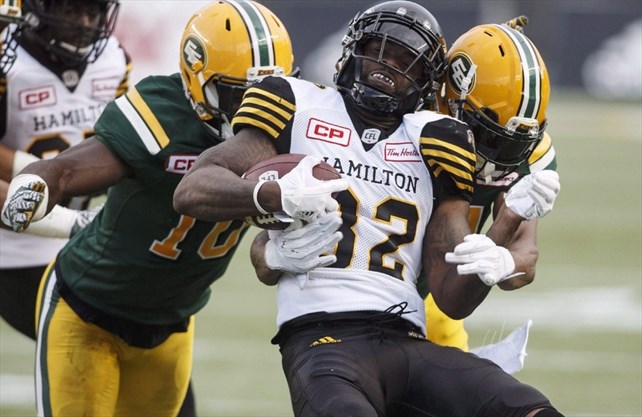 Edmonton is missing a bunch of starters, Ticats are missing two - Chambers and Green (and White too - but Whitlock is actually looking pretty good) .

Edmonton's ploy of trying to gain an advantage by scheduling a later game than usual won't work, as the Ticats have been in Alberta the whole week.

So I'm calling this one to be high scorvclose. Gable will be ready to roll, but so will Masoli. I suspect home field will be the deciding factor, with Edmonton winning be two points on a last minute field goal.

Lightning delay. Here we go again for the Eskimos.

CFL can't catch a break with all these delays. So frustrating.

Has this game started? ESPN is still waiting for it.

Another 5 min. or so now until the start

Tasker! Cats off to a good start!

Masoli is definitely a winner. They made the right decision keeping him.

That could have EASILY gone the other way - high risk pass.

That could have EASILY gone the other way - high risk pass.

It was really close...but not close enough!

Wow he couldn't have been more open.

I want to see Johnny Football !

Nice! That was a great drive by the Cats.

Early in the game and again Masoli is on and looks like the real deal.
I would be trading JM and all of the controversy to the Als.

I read a couple weeks back the Esks were on par for a 40k opening game crowd.

Early in the game and again Masoli is on and looks like the real deal.
I would be trading JM and all of the controversy to the Als.

The Als could sure use him. He's going to do well in this league.

Looks as if the Cats defence just might be up to the challenge tonight.

Another awesome drive by Masoli to his go to receiver Tasker.