It’s the Battle for the Basement, in the West Division. This is the first of two games between these two teams, and they don’t play again until the end of October. 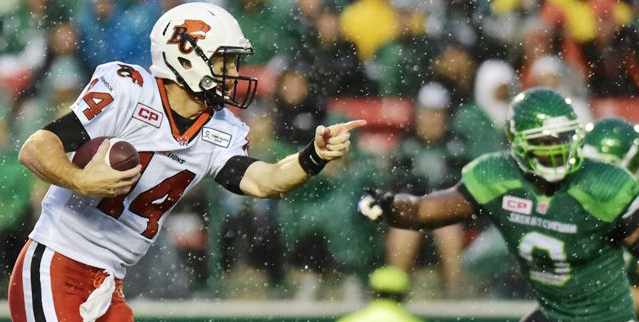 Even though the Lions lost week they’re starting to show a little better than just a few weeks ago before they beat Edmonton, which was a bit of a surprise. Neither team want’s to be in the “basement” I really think #14 and the fella’s will take this one. If they don’t they better start paying rent, basements suites can get pricey in Vancouver from what I hear.

Milt is such a Lion hater.

BC ball drops early in the game as well as a sack within smelling distance of the end zone. Settling for three is so unnecessary.

looks like the Lions are going to have their hands full tonight. Roughies’s looking good.

looks like the Lions are going to have their hands full tonight. Roughies's looking good.

Lions don't appear to have any hands tonight.

Got to quit turning the ball over. Nice catch by Collins

Got to quit turning the ball over. Nice catch by Collins

Both quarterbacks throwing the ball well. As a fan of neither of these teams it’s been enjoyable to watch so far.

And Burnham finally holds on…

Lions and their 2pnt conversion attempts. Stop it! Go for the damn point.

Both quarterbacks throwing the ball well. As a fan of neither of these teams it’s been enjoyable to watch so far.

I agree, they are looking good. I'm also a fan neither team, no pressure tonight

Ya it’s early in the game - just get the 7 points.

How the heck did that 21 yard pass to Collins stand as a catch? Ball clearly loose underneath him.

Perfect pass from Lulay and Elliot drops it.

As the gap narrows………

Wally refusing to get squashed by that young upstart Chrissy Jones (even though Jones is entering mid-50; Wally approaching 70)

Should be a 2nd half gooder - BC missing The Manny Show - while Sask’n starting to cool before the half . . . .

Perfect pass from Lulay and Elliot drops it.

BC needs some receivers that can, for lack of a better term, actually receive. :o

Burnham is the only guy with hands.

BC’s defence is tightening up. Play calling for Sask offence seems to be changing before the half. At this point it seems BC is gaining the edge.