Ticats will wear Black on Black

Winnipeg as the home team had the choice.

The Winnipeg Blue Bombers are keeping the road warrior mentality even though the West Division champions are the home team for the 107th Grey Cup.
After going into McMahon Stadium and Mosaic Stadium and upsetting the hosts, the Bombers chose to wear their white jerseys with gold pants. Winnipeg only had three wins away from IG Field during the regular season and a victory in the CFL title game could match that number in the post-season.

Hamilton will be happy with the uniform selection because it means the Ticats can wear all black — jerseys and pants — like the Tabbies would at Tim Hortons Field. Orlondo Steinauer’s group were a perfect 10-0 in the blackout kits — it could feel like a home game for the Ticats.
Both teams clearly elected against touching the respective division trophies, saving the celebration for the big silver trophy. Superstitions are serious business for the Bombers and Ticats with a championship on the line, but only one team’s methods will lead glory

Boo urns on black pants. But will get over it.

As long as that magic stripe is on the helmets…

Was really really hoping for the gold unis.

couldnt be happier with this news. Our boys are going to win AND look good doing it.

couldnt be happier with this news. Our boys are going to win AND look good doing it.

Indeed, the all black uniforms are great!!

The Ticats will be all business next Sunday

They looked good with stripes on the pants; but those stripeless black leotards are moronic. Should definitely be wearing gold pants… IMHO.

Was really really hoping for the gold unis.

Team can get them cheap from people who bought them with MAAS on the back.

Thought that Winnipeg as the home team (officially) would wear home unis and expected the Ticats to be in black pants and white jerseys. I can see their reasoning - coaches/players in sports can be a superstitious bunch! Guess what they wore when playing the Ticats wouldn’t work since they lost both games!
Not upset with the all black look although what they wear doesn’t matter since they’ve won in all black, black/gold, white/black, white/gold and all white! (I think) At least I’m assuming they have since they only lost three game and I really don’t remember what they wore in those losses but I’m sure they also won in the same uni combo.
It’s not the uniforms - it’s the guys IN them that will make the difference on Sunday and hopefully bring home the hardware!

I think Dunks article is a bit misleading. He said they would be wearing the uniforms they went undefeated in at home which were not always the all black, sometimes in the gold pants. Black jerseys for sure, we shall will see if they go black or gold with the pants. I’m hoping for gold but it really makes no difference on how they play.

1972 too. But all three were actually black jersey with gold pants.

No. The gold pants need to be worn.

I personally love the all black look. I think what is most important though is which uniforms the players prefer, and it is clearly the all black look as well. Look good, feel good. Feel good, play good. Simple as that.

They looked good with stripes on the pants; but those stripeless black leotards are moronic. Should definitely be wearing gold pants… IMHO.

I agree! I hate the uni-colour look for any team. And so do most fans it seems, but home teams still all too often trot out with the one colour unitard/pajama look. I just don’t understand it.

Moreover the toughest Ticat of them all, Robbie on our left here, eschews the uni-colour look: 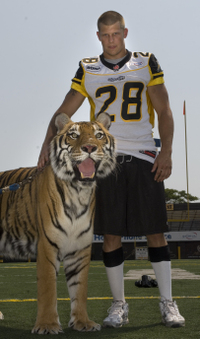