Cats are back to the 46 man roster, for this game, with the addition of Moniz for 3 dressed QBs.
I'm surprised to not see Okafor dressing.

A quick look at the MTL chart seems to show them going with their best.

It could be the night Johnny's been dreamin' about.

Capicciotti has been resting all season hasn’t he?
Interested to see how Stephen, Wacha, Bennett and Timmis perform.

Capicciotti has been resting all season hasn’t he? 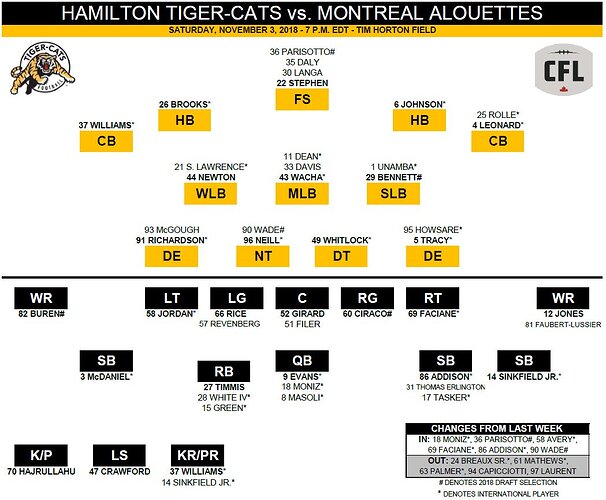 Tough to handicap this game as far as putting a point spread to it. The young guys will be super pumped to show they belong so the effort will be high.

If I were the coaches, I’d keep a close eye on how Addison plays and how McDaniel plays. For the playoffs, its not obvious to me that you have to go with the more experienced guy if he is struggling to make his catches.

Manziel is starting, Looks like pretty much all their starters 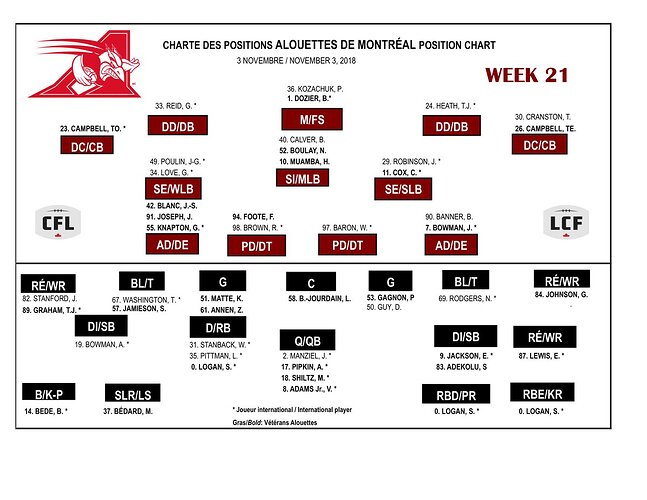 Rest most of the starters. We have bigger fish to fry in the playoffs.

play for your fans.

play for your city.

play your hearts out.

don’t sit anyone who is able to play.

we need to turn this ship around and get some momentum for our playoff game.

JFF is not getting a win in our city.

Sitting everyone possible at the risk of injury … sinkfield starting in the slot with a QB making his first start and no starting receivers around him.

What could possibly go wrong?

Sorry I missed his funeral but you mean Mercer Timmis is still alive?? I cannot believe Mercer Timmis is still alive. Somebody tell me it’s true, please. Would have like to have seen him one more time after his great game in Edmonton but that’s the boring nature of June Jones. I hope Timmis proves what a bone head he is and runs over people on his path to 200 yards rushing.

I don’t expect to see another win this season. Lets dream about next year.

I don't expect to see another win this season. Lets dream about next year.

Seriously?? I fully expect that like the game last night, our second stringers will be able to run over the larks - even if they are starting most of their first string. Especially if the larks play anywhere like the boatmen did last week and last night - although I do expect our guys will get a bit more of a "fight" from the birds.

Here in the stands ready to go. The “excitement” is palpable.

Here in the stands ready to go. The "excitement" is palpable.

Stay warm out there. Nasty day here today (about 2 hours north) - cold wet windy! Hope it's a drier there at least.

Not bad. No rain. Our seats are on the west side so sheltered from the wind. It is maybe 15k per hour anyway.

Not bad. No rain. Our seats are on the west side so sheltered from the wind. It is maybe 15k per hour anyway.

Good to hear - i could probably handle that - I did survive last years GC in Ottawa!

It'd be nice if the weather wasn't a factor like it seemed to be last week.

Looks like Pipkin is starting ahead of Johnny?? :o :o :o- at least on TV they showed Pipkin with his helmet on and Johnny without his on the sidelines.

Good to hear - i could probably handle that - I did survive last years GC in Ottawa!

It’d be nice if the weather wasn’t a factor like it seemed to be last week.

Do NOT mention sitting in the stands last week again!!!

Never left at half before.