The Canadian Football League announced today the Most Outstanding Players for the East and West Divisions and two Hamilton Tiger-Cats have earned East Division awards.

Gable established himself as one of the league’s top offensive weapons during his first CFL campaign. The USC product totaled 1,382 yards from scrimmage – 782 rushinng, 600 receiving – and 12 touchdowns in 15 games this season, averaging 6.0 yards per rush and accumulating 501 yards after the catch. Gable was named an East Division All-Star on Wednesday.

Beswick led the CFL with 24 special teams tackles and earned an East Division All-Star nod for his exceptional work on the Ticats special teams units. In addition to his prowess on coverage teams, the six-year veteran also added a forced fumble and scored his first career touchdown on a fake field goal in Week 13, Beswick has now led the Tiger-Cats in special teams tackles for four consecutive seasons.

The East and West Player Award winners were selected by 77 voters, including members of the Football Reporters of Canada (FRC) and CFL head coaches.

Great Honour for these two, they've played hard all year and have earned the recognition. Congrats guys! 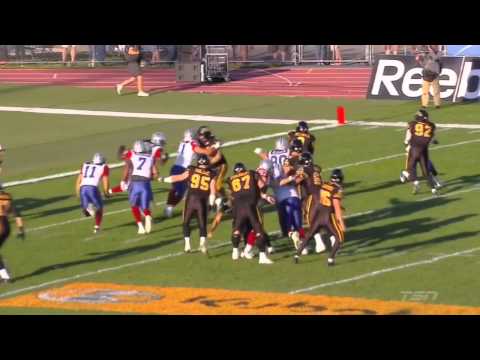 I disagree with the East MOP because I don't think Ray should be honoured for playing just 10 games. [/b]

Now go out there and win the next two weeks to bring the rest of your teammates with you to Regina.

Looks like Drew made a boo boo! Good catch ExPat.

Go vote for Beswick is TSN's play of the year showdown

Congrats to both for sure. Nice ball Beswick is carrying!