Emergency generators may be needed

It looks like Reinebold wasn't the only one to blow a fuse last game!

[b]The city of Hamilton and contractors will be at Tim Hortons Field Tuesday to find out why a transformer blew during last Friday’s Ticats game.

A backup generator was used to complete the game.

If the transformer can’t be replaced quickly, the city will use emergency generators to power the two remaining Ticats football games this year at a cost of $17-thousand per game.

It’s just one of the issues lingering at the 145-million dollar stadium.

While the problem of hanging speakers has been addressed, the Spectator reports a safety audit of the structure has found other concerns of shoddy workmanship.

One involves the discovery of 10 missing bolts in the scoreboard.

A draft of the audit will before city councillors on Friday.[/b]

I don't believe this is the truth. There has been the smell of diesel burning for the past
3 or even more games. I have a terrific nose and I was going to complain to customer
service because of the burning diesel fumes. This has been going on for a while. I sit
in section 104 - seat 27. Has anyone else noticed the diesel fumes smell?

Something smells with the whole stadium construction from the start not just a few missing bolts or lack of volts in the power grid?

I think an entire audit should be conducted from the turf up to the press box on what is wrong, missing or needs to be corrected at THF!!

Infrastructure Ontario should be ashamed of themselves lol....

It is crazy to think that IWS was safer than this place.

Every time I hear world class and state of the are with regards to this stadium I can’t help but laugh.

I don't believe this is the truth. There has been the smell of diesel burning for the past
3 or even more games. I have a terrific nose and I was going to complain to customer
service because of the burning diesel fumes. This has been going on for a while. I sit
in section 104 - seat 27. Has anyone else noticed the diesel fumes smell?

in fairness that could have been from sideline heaters for the players.

Did you ever think the emergency replacement generators may run on diesel fuel..... DUH !!!

Generators were running down there yesterday!

It's all fixed and it wasn't that big of an issue

Stadium power back to normal for weekend Ticats game

[b][i]There's good news for taxpayers and football fans; the blown transformer at the city's problem-plagued new football stadium is fixed and ready for the Hamilton Tiger-Cats final regular season game.

The city was forced to scramble last week to bring in emergency generators for the Ticats' game against Edmonton after one of the stadium's two main transformers started to smoke and emit a high-pitched noise.

Officials were braced to pay $17,000 per game for portable generators for the rest of the season if there was a chance the remaining transformer would fail.

But manufacturer Siemens tested both transformers earlier this week and didn't find any serious problems that would warrant a costly — and time-consuming — replacement, said city facilities director Rom D'Angelo.

He said the working theory is loose bolts may have allowed too much vibration within one transformer, which takes in high-voltage power and allows it to be used within the $145-million facility at a lower voltage.

"It looks like a bit of a freak situation," D'Angelo. "There doesn't appear to have been a major design or installation issue."

He said the stadium's operating budget will cover the cost of the generators last week, but added the rest of the repairs and tests on the transformers are covered under warranty.

D'Angelo said he no longer expects to add the issue to the growing pile of stadium problems under negotiation with builder Ontario Sports Solutions, the Ticats and provincial project overseer Infrastructure Ontario.

The parties are discussing responsibility for the nearly year-late delivery of the unfinished stadium, along with latent defects and a stadium speaker that fell into the stands this June. The province, city and football team have all exchanged legal claims in the event negotiations fail to settle the multi-million-dollar financial dispute.[/i][/b] 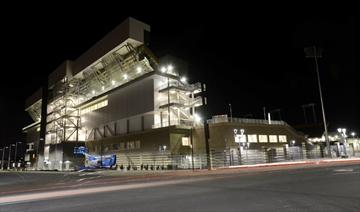 Yet another issue with bolts? :?

It all boils down to poor workmanship. I trust there are supervisors checking the quality of work being performed? In this case not. Another black eye for Ontario ans Cathleen Wynn and her minions.

Wait a minute!
if the transformer had a failure last week because of loose bolts, why is this not under warranty?
If it costs $17,000 per game why should this come out of the operating budget.
It should not cost the city (or it's taxpayers ) a dime.

one year warranty for the stadium had expired! lol what a Joke :lol: