I figure with the Ticats first day of practice being today, and with all the junk happening down south, this will give us something different to talk about..

What are we speculating the roster looks like?? I am guessing Woodson and Timmis will be backing up Gable with the release of Ford.. but we may see Kendial Lawrence somehow slot in.. although I would prefer he didnt.. lol

Not sure what we're gonna see at receiver.. but I have a hunch we may see more of Tyms.. he was effective. No idea if Tasker is back, but doesnt sound like it, and with closed practice today we won't find out until tomorrow earliest.

On the D side, obviously expect to see our regular front 4 and rotation.. same at LB with Raymond likely starting at SAM alongside Lawrence and Dean...

The secondary is where it gets very intriguing.. the cats released Derrius Brooks today, who started the last 2 games for us at HB.. which means someone is ready to return. It sounds like Courtney is ready to come back, so I expect him to start at either safety or corner.. likely safety. Emmanuel Davis will start either at HB or safety (depending on Stephen).. and Vaughn will likely keep his spot at corner. After that there are a ton of question marks... a video Johnny Sears posted on his twitter on Nov 1 showed him to be working at a pretty good pace in practice.. can he be ready 12 days later? What about Rico Murray? Last update was possible for the East Final. If he's unable to go it'll be Dominique Ellis likely.. and Chris Davis at Corner..

I know it's wishful thinking but I am hoping for Sears, Murray, Stephen, Tasker and Sheurman to be activated. Those additions would fill some pretty deep holes and Sheurman from what I remember was able to move the ball really well pair him with Gable and that is a good duo

Smart move, I think. That one o'clock EST start will come pretty early to a body used to Prairie time? An extra day will help them to adjust. Good for them, but maybe reduces some of our home field advantage.

Forecast is 12 degrees and sunny. Amazing football weather for November.

Smart move, I think. That one o'clock EST start will come pretty early to a body used to Prairie time? An extra day will help them to adjust. Good for them, but maybe reduces some of our home field advantage.

Yes, Home Field Advantage is still ours with a Loud Crowd :thup:
The way the Esks handled us last game here ,they kind of have Home Field confidence already.
We are up against last seasons Grey Cup Champions who have rounded into form after a slow start ,We are total underdogs from here on in.
This is where we have the advantage ,coaching!
All Up Hill from here .....
Great day for an Eastern Division Semi upset alright !
Repel the Cross OverAlls!!

I am with you Beam reach. This will be the last chance to visit THF for 2016, so it will be bittersweet, win or lose. I'm hoping for a full house, lots of excitement, and lots of noise to cheer on the Cats.

I just watched the PVR of the Montreal game. Still impressed with the D for the first quarter, despite missing several starters. Zach looked good against a strong Montreal D, and against the wind. Mathew actually looked better on the tube than live. Tyms and Elliott looked good, Collins acceptable, Watts and Chiles okay, Jones a question. Speedy is not a receiver. Downer was special teams, both kicking and receiving. Got to have Maher and Speedy B on track come Sunday. Got to have better blocking schemes and absolutely need better down-field pressure and tackling.

It's been a tough year (again?) to be a Ti-Cats fan, but I am hoping we go out in style, starting with a win on Sunday. I would love to get another crack at Ottawa and especially to knock them off at their place. Heck, the Cubs won after 108 years, and Trump managed one of the bigger upsets in the history of mankind. Even the Leafs had a three game win streak going. Maybe????

So far, here are our practice updates. :?

steve milton ?@miltonatthespec 44m44 minutes ago
It's very windy at #THF. Good preparation for #Ticats, just in case on Sunday.

Here is the write up from Drew

[b][i]The Hamilton Tiger-Cats held day two of practice on Thursday after closing Wednesday’s session to the public and media.

The most significant news is the return of Canadian safety Courtney Stephen, who missed the last six games with a knee injury. He has a pair of interceptions this season and, despite his absence, is tied sixth on the team in tackles with 38.

The Ticats are also expected to make a ratio change along the offensive line with rookie Canadian Brandon Revenberg making his seventh start of the season and second at right tackle. American Terrence Campbell, who made six starts at right tackle this season, was added to the practice roster on Wednesday.

By adding Revenberg and Stephen, the Ticats will gain ratio flexibility on both sides of the football. Look for the team to dress four American receivers instead of the usual three, a virtual necessity with injuries to Canadian starters Andy Fantuz and Mike Jones. Hamilton will also line up with an American defensive tackle – they’ve used two Canadians recently – with international Drake Nevis lining up beside all-star Ted Laurent.

Despite Stephen’s return, Hamilton’s injury list remains extensive. Receiver Luke Tasker as well as defensive backs Johnny Sears, Rico Murray and Johnny Adams did not practice on Wednesday are not expected to beready in time for Sunday’s East Semi-Final against Edmonton.[/i][/b]

Our Defence will be the key to winning this game.
And they are in good shape up front...
Go Cats Go. :thup: :thup: :thup:

Really pumped for the game- a buddy and I are going and I bought an extra ticket for my brother.

Question re "etiquette" I suppose... The extra ticket is a few rows down from my usual pair in 202. If it were a few rows up I'd offer a pair in that row to switch and move down to my seats so the three of us can sit together, but since they'd have to move up I'm not sure. I'm not expecting there will be any free seats to just kinda sit in, and we're not really concourse standers. What's the best way for us to sit together?

If there are two together beside your brother, I would ask them to trade. I mean, it is the same section, right? If you asked my wife and I, we certainly would and have offered to do that in the past.

Last week we took my sister-in-law and her husband, and had planned to do the same thing (they were in the same section, same row). Lucky for us, the four beside us were empty and they simply moved over and joined us.

I suppose, if you feel there is a need, you might offer to buy them a beer for their efforts. But I would definitely ask. I mean, all they can do is say they would rather not? You could probably also check with any couples behind or in front if that is the case. 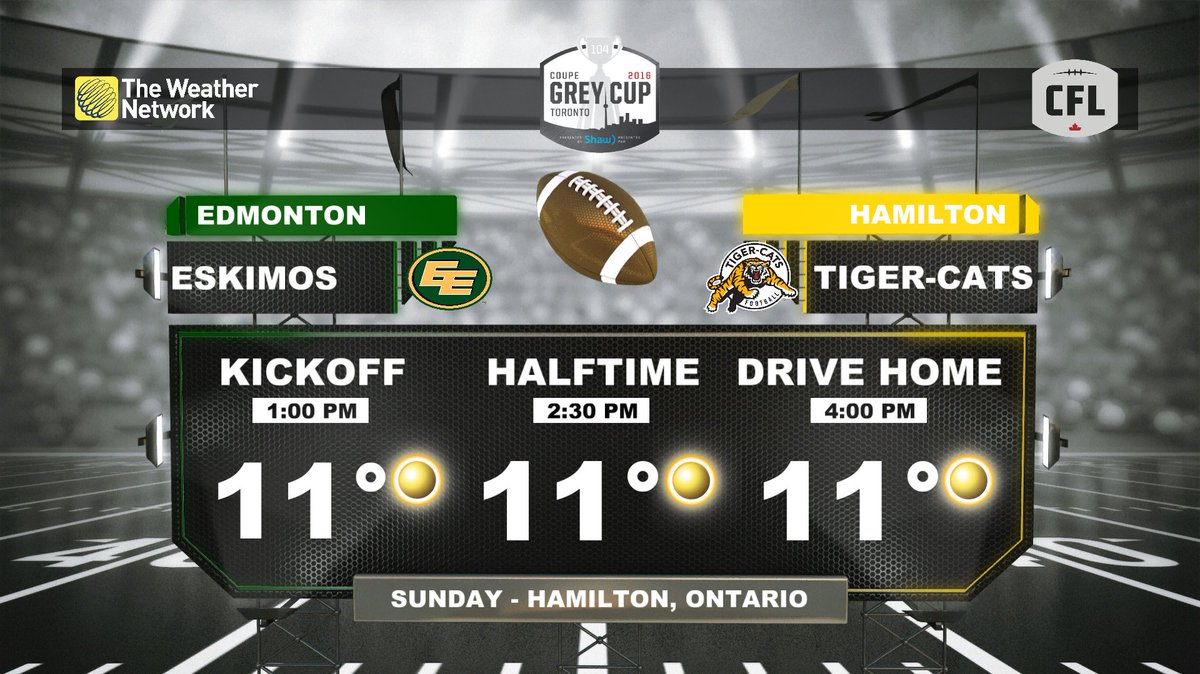 Another update from Drew

First, they’ll need to protect Collaros so he can try and take advantage of a suspect Edmonton secondary. The Ticat receiving corps has been decimated by injury and features plenty of inexperience – don’t sleep on the unknown Brian Tyms – but the passing attack remains this team’s most dangerous weapon.

To do that, rookie offensive lineman Brandon Revenberg will have to hold is own against Eskimo pass rushers Odell Willis and Marcus Howard (with a little help from running back C.J. Gable.) Edmonton likes to get pressure with their front four and containing them will allow Collaros to take his shots downfield.

That said, Hamilton has its own problems on the back end. After a season full of line up changes – some injury-related, other due to performance – the Ticats will come into the most important game of the year with yet another new look.

Defensive back Cleshawn Page, who played four games with the club last season but was released in training camp, will get the start at the boundary corner spot after re-signing last month. He has not played in a CFL regular season game this year but replaces Cassius Vaughn, whose struggled at times during his nine games this season.

Page will be charged with trying to help stop Edmonton receivers Derel Walker and Adarius Bowma, who, in addition to leading the league in receiving yards, eviscerated the Ticats this season to the tune of a combined 32 catches for 393 yards, three touchdowns in the two games.

Austin has a 48-42 regular season record as a head coach but is 6-1 in the playoffs (7-3 if you include the Grey Cup.) For all their faults this season – and there have been many – the Ticats have been a resilient bunch, rallying from 15 or more points to win on three occasions this season, the most of any club in CFL history.[/i][/b]

Page is their fastest DB. I'm glad they are putting him in for Vaughn.

I was impressed with Page when he played the last couple of 2015 regular season games. He's small, but fast. Those EDM WRs will certainly be a test for him.

Paulo Senra
?@paulosenra
All set for pregame press conferences from the Hammer today. Kickoff is Sunday, 1pm ET on @TSN_Sports/@ESPN. 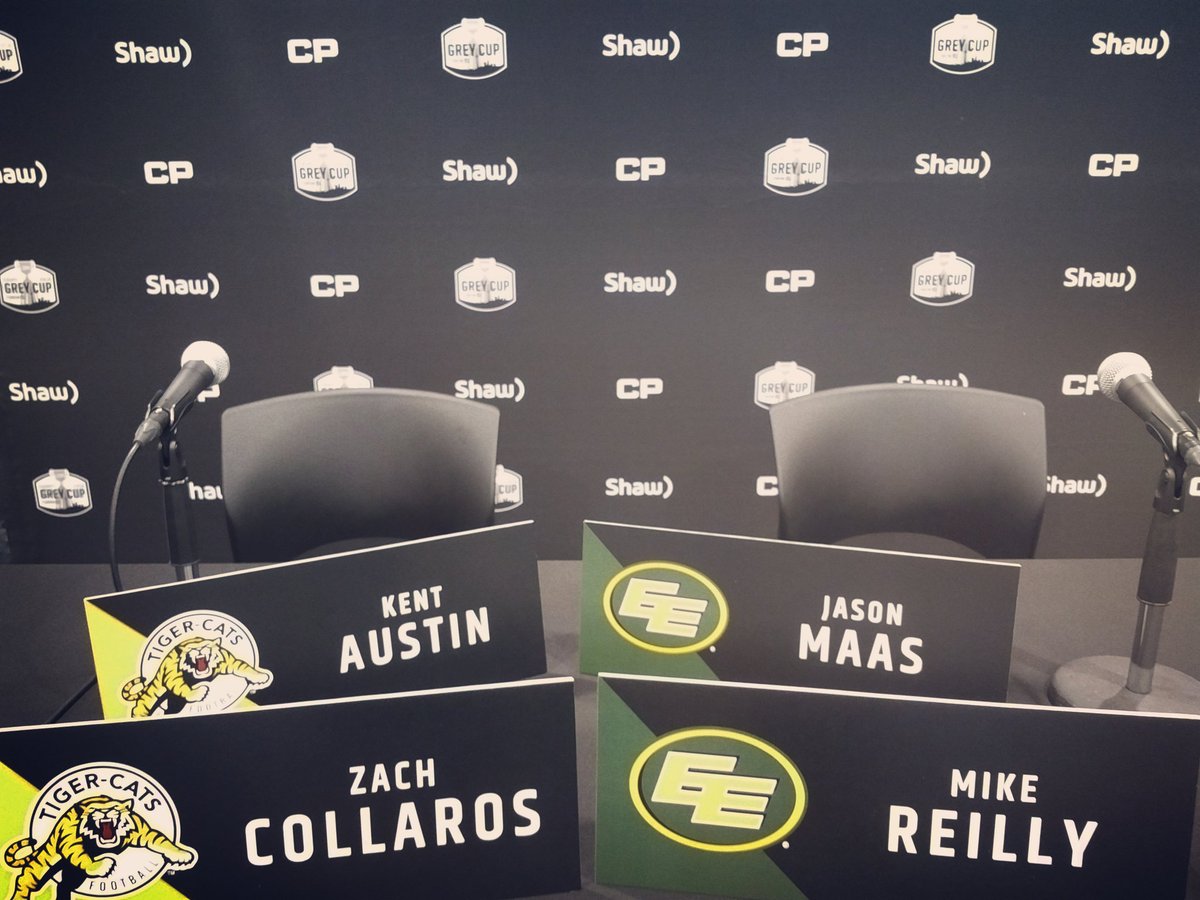 I was impressed with Page when he played the last couple of 2015 regular season games. He's small, but fast. Those EDM WRs will certainly be a test for him.

I agree, Vaughn was not good.
When we get pressure on Reilly it will help our DB's 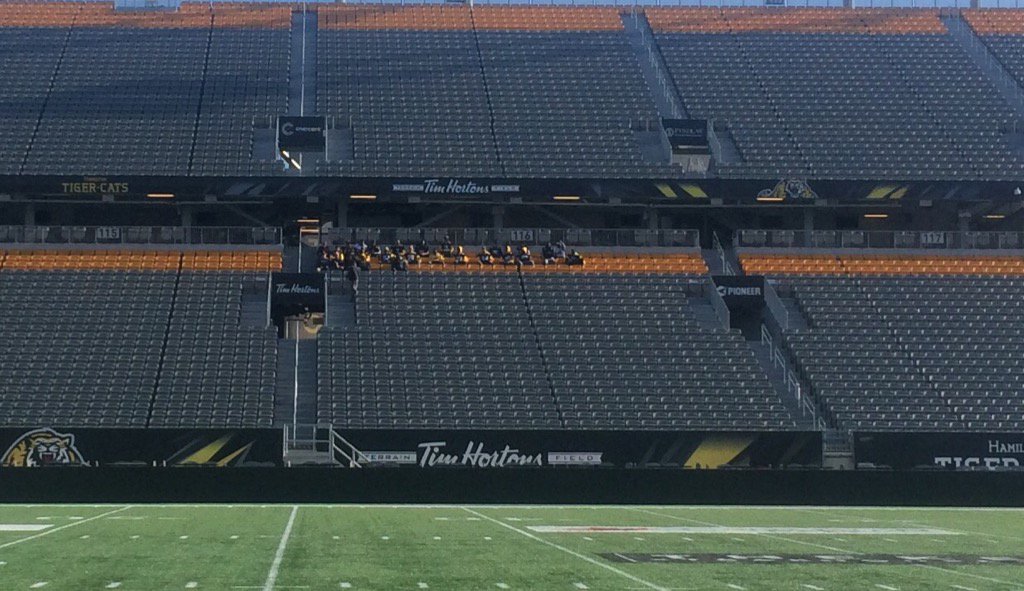 Reilly with his clown outfit on.
Maybe he should do an Oski Wee Wee with that bowler hat!

Good news is Reilly didn't look great in the first half of the last game they were here.
I love Nevins in on the D line.
Need a big game from Gable...He is capable of putting the team on his back when he gets on a role!!
A big Special Teams day would be nice for a change as well as we need all the help we can get.
Lets hope Tyms or someone emerges as hidden gem.

Someone needs to know that hat of Reilly as well! Who wears the same hat as a team mascot. Is that for real?