Ain't that a kick in the gnads

I hope Diakowski is a starter because he is done.

I'm sorry he's no longer with the Ticats, but he's an excellent person and has every right to ply his trade wherever he can.

For Canada's smartest man, This is not a very smart move! :thdn: 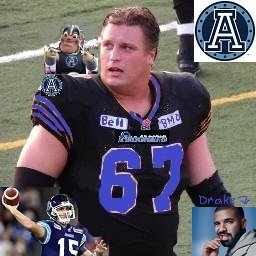 Peter with an interview on his move with Drew Edwards

I have never heard him choose his words more carefully!

What the what? Did they try to trade him with no takers? Oh well, that's the entertainment business, love the one your with. This sure doesn't smell right. :thdn:

He's getting paid to play 18 games.

And here I thought that you were "Canada's Smartest Person"[/i] 8) :cowboy:

one of my favourite Peter Dyakowski moments when he stole Brian Simmons sweater and gave it to Gene Simmons of KISS as a gift . 8) :lol:

I can't think of any athlete, in a similar situation, handling it better that Peter has. He's spoken , with humour, of great memories, rather than hurt feelings, and well of the TiCat organization while, at the same time, saying positive things regarding his future, his new team, and the rivalry between the two. And, in a very professional manner with the names he mentioned, from both organizations, and those he didn't, I think he managed to give us a pretty good hint as to how his career in Hamilton came to end. It'll be a different locker room now. Good luck to a good guy and to whoever is assigned his stall here.

With all due respect to Peter, this is the same team that signed Josh Bourke last season and looked how that turned out.

I would not have a great deal of confidence in their judgment.

Not so sure that this will end well....

I am starting to wonder if Fantuz may also end up with The Argos seeing how Condell is there , I just get the feeling all is not a bowl of roses when dealing with Austin .

I am starting to wonder if Fantuz may also end up with The Argos seeing how Condell is there , I just get the feeling all is not a bowl of roses when dealing with Austin .

Yet, Davis, Tolliver, Fulton, Daly and Lawrence resigned and Sinkfield could be on his way back.

They could have their choice of other teams.....

After listening to the interview, I too have an opinion on what/how he feels and he obviously doesn’t want to burn bridges.

The truth of the matter is that once the season starts, after he’s had a pre-season game, he, and most fans will be back to their regular routines.

The business side of football is hard on the emotions.

I can see him, when “he” decides it’s time, retiring a Ticat, if he doesn’t win a GC in T0. I can also see him getting a place on Hamilton’s “Wall”. :thup:

I'm surprised Drew didn't ask Pete anything about the uncertainty in the Argos organization. No GM, no coach. It's an obvious question, and even more so given that Pete implied he is improving his chances to win a Grey Cup, and that several high profile free agents have shunned toronto this week.

Just like when Owens signed with Hamilton, it's academic. By signing with the team down the road, he can avoid selling his house and uprooting his family.

So who exactly is making these signings for the double blue? Condell?

If Condell/the Blue team think Dyakowski is good for a couple more years...then why is he not good enough for Austin?
I know Dyakowski has been injured but players like him don't all of a sudden forget how to play.

Maybe it's Austin who is running out of gas.

Rookie Brandon Revenberg started taking reps from Dyakowski early last season and had fully supplanted him as the starter by season’s end — only the youngster’s shift to tackle due to ratio needs kept the veteran in the starting lineup for the playoffs.

With veterans Ryan Bomben and Mike Filer fully established, the Ticats also have some young offensive lineman in development — Mathieu Girard showed last year he’s ready to contribute, and Everton Williams needs a chance to show he can.

All of them are younger and, in most cases, cheaper than Dyakowski, who made in the neighbourhood of $160,000 last season and was set to make a similar amount again this year — far too much for a player who won’t be starting. The team offered Dyakowski the opportunity to retire or return at much lower salary and the opportunity to compete for a backup job at training camp — with no guarantees that he’d be on the roster.

All this doesn’t mean he can’t help the Toronto Argonauts, who signed him to a two-year contract in excess of $100,000 per season — an appropriate number if they think Dyakowski can play a sixth-man role. But the Ticats have other younger, cheaper and more versatile options.

No way does it make sense to pay him that much when he's not going to start. The Argos have to overpay because they're having trouble attracting FA's. This isn't a popular move, but it's the right one for the team.