What’s going on with Dave Stala? I haven’t seen any balls thrown to him in quite a while. I don’t think I even saw him on the field yesterday! Is he hurt? Is he being ignored? In my opinion, he is one of the league’s best receivers!

I saw him on the field yesterday, but you're right he hasn't had much action recently. :?

Stala is in the twilight of his career,and has taken on the role as a foot soldier,graciously giving way to younger players,but is still no doubt a great mentor and veteran leader on this young rookie laden club.I wouldn't be at all surprised to see him and perhaps Marwan retire after winning the Cup this year,and have them both go out on top,finishing their careers with a much deserved Grey Cup victory and coveted Championship ring.They are like the "Mythbusters"......between them over 20 yrs experience in the CFL and 15 yrs experience between them as Ti-Cats!!!

The same was said about Ricky Ray when he was with the Eskimos, and he made a huge comeback! Stala is still a premier reciever and a smokin’ hot go-to guy when you need a first down or touchdown. Too bad

Fourth quarter yesterday, while our D was on the field, Stala with his helmet off came toward the crowd and led us all in yelling while he had a big old grin on his face.

Fourth quarter yesterday, while our D was on the field, Stala with his helmet off came toward the crowd and led us all in yelling while he had a big old grin on his face. 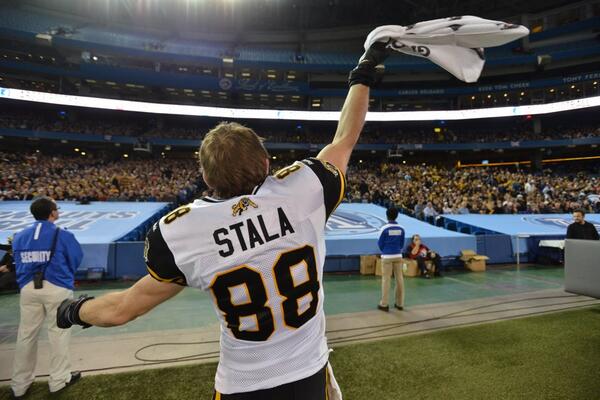 Watching the pregame from the 200 level on Sunday I was amused just watching DS catch balls thrown to him from the QBs warming up. His hands are still a beautiful thing. He is an awesome team leader and team mate and if someone goes down with an injury or we need a trick kick old vet Dave will be there for the team.

I know he got a big illegal contact call for us this game, but that's not really a showcase of his abilities. What it really comes down to is Bakari Grant really upped his game this year, Andy Fantuz is the Fantuz of old again, Greg Ellingson was a rookie of the year candidate and Sam Guigere is starting to come into his own and pickup the tricks.

He's still a crucial backup non-import, which is really admirable that he's staying on and filling that role and teaching other players the ins and outs.