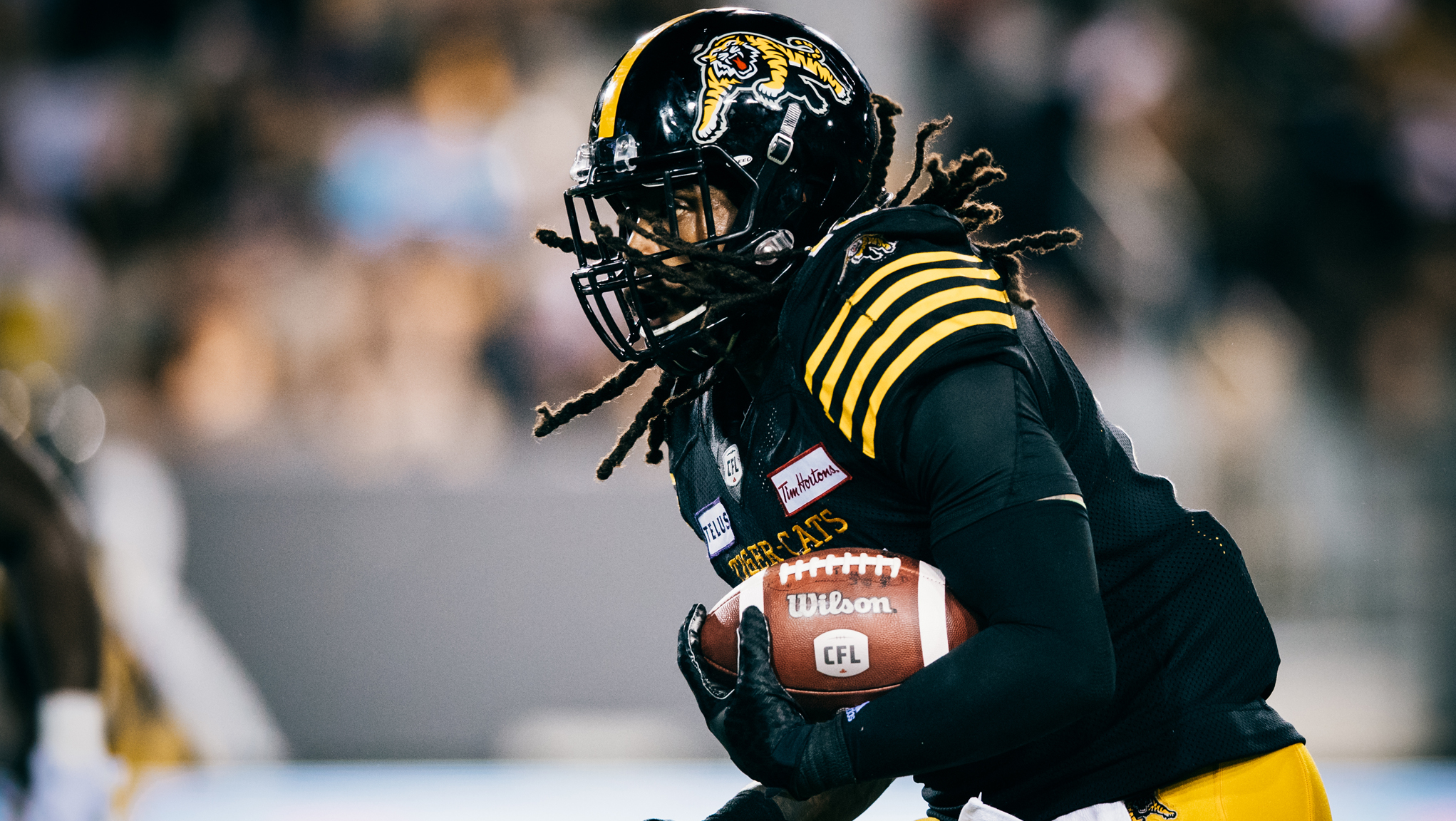 Alex Green and Justin Capicciotti were among 14 players that were released from the Hamilton Tiger-Cats on Monday.

Damn - Greene? Wonder what happened, he was powerhouse upon initial contact.

The Ticats just had a few free agent camps (Buffalo, Baltimore). We must have uncovered a few diamonds in the rough at international RB/DL who will be signed soon.

Looks like that running back Hamilton just signed from the AAF, or Cameron Marshall, will have a legit shot at starting for us this year.

Or maybe we’re going Canadian at that spot? Thomas-Erlington and Irons?

Capicotti was making too much money for the contribution he was making, sacks-wise.

Interesting that Westerman (another high priced player) wasn’t cut. He must be looking good, health-wise. He should make a big impact for us this year after a full camp.

The fact that Whitlock was axed (along with Alex Greene) proves that this year’s team will not include any players who have strong connections to June Jones just because of those connections.

Wow ! I didn’t see that coming for Green and Whitlock . Obie always said “Better is better”. I guess we’ll see . Screen passes to Green were a joy to watch and Whitlock was the Swiss army knife on the team .

In Orlondo we trust. 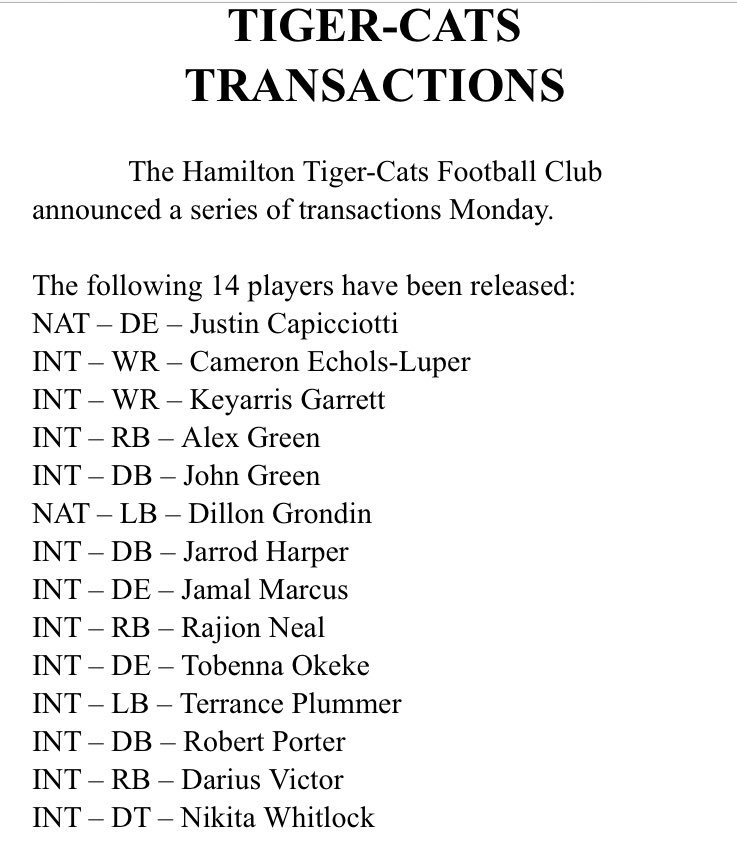 9 of the guys, announced as, released today were actually registered with the league as released, and reported as such in this forum, on April 30th. (Echols-Luper, Garrett, Harper, Marcus, Neal, Okeke, Plummer, Porter & Victor)

That day, Trey Caldwell and Justin Stockton were also registered with the league as released. With them not being on today’s list, I expect they impressed in Cleveland and/or Baltimore and could be "re-signed" when the cfl.ca/transactions list is updated. The announcement today regarding Capiciotti, Whitlock, the 2 Greens and Grondin is all new news and, in some cases, surprising.
$$$$ freed up for Elimimian?

So, now the published team roster lists 67 players. If I’m right on Caldwell and Stockton, the total would be upped to 69 and we’re aware of 6 more players who’ve been registered with the league as signed but, as yet, have not been announced, by the club, and added to the roster. (David Dean, Lorenzo Mauldin, Marcus Tucker, James Allen, Maurice Carnell & Hayen Moore. They bring the total to 75 and with likely half a dozen being non-counters, the Cats have room to add a few more.

DLine needs to get better.

Wouldn’t be dissapointed to see an upgrade of Tracy and potentially Howsare too.

John White still on the team?

John White still on the team?

Nope . signed with the Lions in FA .

With HAM loading up at RB during the off-season was a clue.

Cappiciotti doesn’t do enough for his price tag.

Whitlock did many things but none particularly well.

Agree on Capiccotti but have to say I’m more than a little surprised at the other two being released .
Perhaps there is more than meets the eye with these releases . Sometimes it’s not as cut and dried as it seems on the surface of things.

From 3DNATION . Here is Drew’s take on possibly why Cap and Green were both let go . Funny but there’s no mention from Drew on why Whitlock was also released .

Some points about the Cuts

I know that this years $$$ is held back until a CBA is signed but I would imagine that upfront $$$ is still owed(even if he was released now), so I suspect he will stay as he would collect the $$$ anyways.

With HAM loading up at RB during the off-season was a clue.

Cappiciotti doesn’t do enough for his price tag.

Whitlock did many things but none particularly well.

This is an accurate analysis.

I would add that Alex Green was a good running back but not particularly mind-blowing. He ran hard but seemed to lack that game breaking speed other feature RBs have. Add in his age and injury problems and his release makes sense.

That would be great news if Westernan’s contract was front end loaded as he is worth 170 k not 220 k. Cutting Plummer doesn’t ensure soli is coming to town as we atill have Frey, Tuggle and Wacha but I would love to see Soli at mlb in black and gold. Too bad they gave up on WR Garret so quickly as he had amazing stats from Tulsa catching passes from Dane Evans.
Capiccioti making starter money as an aging backup makes sense . I am shocked about Alex Green since June Jones loves him . I felt he had some good games and some bad ones. He did not do much in the Eastern Final. I think they must be very high on Stockton plucked from the AAF and Cam Marshall. Green likely signed for decent money on his 2knd CFL contract. Whitlock was likely a money thing as well but will be missed on special teams With Whitlock cut and Robinson retiring that leaves us empty at import DT. Justin Vaughn is not a starter in this league. I am shocked that Tracy is still around as he likely signed for starter money as a backup similar to the Capiccioti situation. Would like to know what we owe Westerman this year . I think he is due for a big year in a contract year and being,heal thy
Just a crazy thought …
If we sign Soli maybe we go with a 3 - 4 defence as Laurent makes s perfect nose tackle with Davis and Westerman at the ends and Simoni, Soli, Tuggle and Rico as th 4 lbs.Mainly because we have no other viable DT starter.

Since we don’t have a Robinson on the team, his retirement probably won’t have too much of animpact . :

Now Bobby Richardson 's retirement was announced by the Cats . He was a rotational guy on our DLine .

It takes a couple of seconds to self-edit but apparently that’s a chore.

Pat Lynch (the person of many years)

The thing about Whitlock is that he could play on both Offence and Defence,
but really he was not very good at RB/FB and really not that great on the Dline.