Confessions: Was it the fans' fault?

I don’t subscribe to the theory that anything we do impacts a game result.

Butterfly effect, your choice of underwear could very well impact the game in very significant ways, its just that you cannot and will never know how, so you needn’t bother to care.

Ok, so how about this for dooming the team?
After being a STH for 46 years, and being a ‘Guest’ lurking about the website for ages, I decide to get all optimistic and chatty and join the Ticat Forum.

You should have held off joining until today. ;D

I don’t subscribe to the theory that anything we do impacts a game result.

Exactly. I predicted a close, low scoring game. How could I have been more wrong!

Maybe it does, maybe it doesn’t. Do you really want to take the chance, and potentially jeopardize the team’s chances over something as easy to control as wearing one’s lucky underwear or enjoying one’s traditional game-day breakfast?

Lol. Next you’re going to try to convince me that karma exists. ;D

It exists in St. Kits…

You should have held off joining until today. ;D

Exactly. I predicted a close, low scoring game. How could I have been more wrong!

Many others predicted a TiCat blowout!
Who is more wrong?

Maybe it was me… I went to the stadium to watch, wanting to be among other fans when we won. But we were playing so bad, I had my fiance with me and it was pretty cold, so at halftime we walked home. On that walk home I wondered if the football gods needed me to tough it out, so that the team would also tough out the win.

I didn’t listen to that thought, and went home to endure the misery alone.

Many others predicted a TiCat blowout!
Who is more wrong?

Everybody thought they’d win, if you didn’t think by 10 or more you were just nervous.

The game result made us all look foolish, but I don’t care. Everything pointed to a Ticat win with relative ease… Then the game started.

I thought we would win, but not with ease as Zach was the X factor.

We simply got destroyed …everywhere.

This one is still painful…and really no one to blame.

But one thing is for certain…you can’t simply do what got you there…even coaches that were handed championship teams usually don’t get it done in the first year.

It’s pretty clear. We were out-fanned: 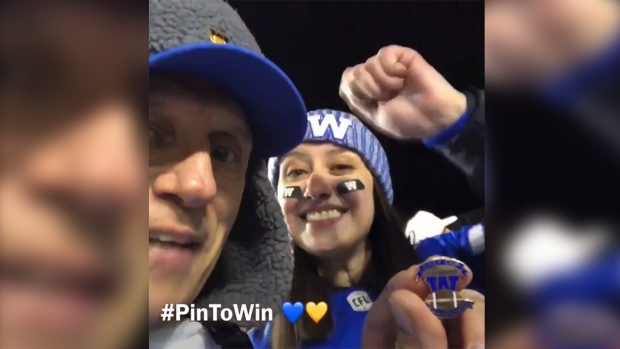 How a Blue Bombers fan may have helped end a 29-year Grey Cup drought using a...

It was after the Bombers’ win over the Saskatchewan Roughriders in west finals – sending them to the Grey Cup championship – that Ron Courchaine and his daughter Kaelee decided they had to do something to help their team.

They probably used Speedy B, O-line and Dane Evans voodoo dolls too!

We played a bad road game …stating the obvious.

Cats need more Grey Cups played in Vancouver , we do well in BC …

When we win, and we will ,the more sweeter then all of this gets wiped away.
Bummer fans have no need to wallow anymore in 92 or 93 or 2001 or…

I have to keep reminding myself that a certain other team have had a worse history… They waited for 31 years between Cup wins (1952 to 1983), and then went on to win 6 more times in the following 33 years!

It’s pretty clear. We were out-fanned:

Herm Edwards said “That’s why we play the games !” On any given Sunday the worst can beat the best .

The Houston Texans destroyed the Patriots, the reigning Super Bowl champs . So naturally in our NFL pool we chose the Texans at home the following week to obliterate the lowly Broncos. Denver’s record was something like 2 - 72 this year .

Of course the playoff bound Texans lost by 20 points . In week #10 we picked the high flying Saints at home to beat the lowly Falcons . Of course the Saints, the far superior team , lost . Carolina was a 9.5 point favourite at home versus the Washingtons in week #13 . Of course Washington , currently with 3 wins, was the victor .

We’re now out of the pool and the lesson to be learned is there are no sure things in sport .

The Giants needed a couple of kneel-downs to kill the clock at the end of an Eagle game . QB Joe Pisarcik’s fumble was recovered by Herm Edwards, the Eagle DB . He ran it in for the winning TD . The play is known as the Miracle at the Meadowlands .