As reported by TSN 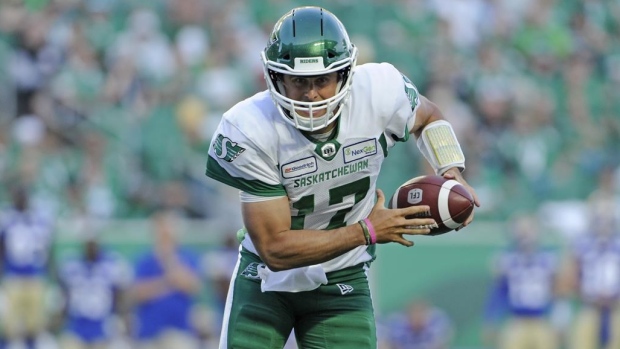 Zach Collaros is returning to Toronto. The Argonauts have acquired the 30-year-old quarterback in a trade with the Saskatchewan Roughriders in exchange for a conditional 2020 fourth-round draft pick.

Didn’t see that one coming.

When a few people suggested “Collaros to Hamilton” I thought it would be too risky given his history of injuries. I guess Argos see it differently.

They just released Bridge eat the crow and see if he can suit up .

There is no one on the planet that is healthy .

The guys beaten up and needs to move on before he has a injury he can’t recover from .

Oh well at least the Cats can get Bridge to back up Evans without any cost .

Well now we know that the Argos don’t subscribe to the approach, “You don’t lose your job due to injury.”

Well now we know that the Argos don’t subscribe to the approach, “You don’t lose your job due to injury.”

Look for Bethel-Thompson to be released soon.

Would we have signed Watford if we knew Bridge would be available?

He can’t avoid injuries, and really should have retired after the Simoni hit.

By coming back again, Collaros is now risking his long-term health, IMO.

I say he plays two games in Toronto, tops, before he’s added to the 6 game again/ultimately retires.

And as another poster said, the fact that Toronto was willing to take on Collaros’ salary, given his fragility, speaks volumes, re: their desperation.

As for Bridge, I don’t see him as an upgrade from Watford at all.

Bridge never would have won any games in Saskatchewan if their defence wasn’t so strong.

I see Bridge, Watford, James Franklin, and Bethel-Thompson as equally talented. These are backup QB’s at best.

Would we have signed Watford if we knew Bridge would be available?

Nothing stopping them now if they were the slightest bit interested.

I wonder if there is any interest in Bethel-Thompson due to familiarity as a possible safety net for Evans?

He has ties to Barker, Condell and is friends with Masoli. He would easily adapt to our offence. The only uncertainty is if he has the skillset to execute it.

Nothing stopping them now if they were the slightest bit interested.

Maybe just some jigging of roster space, money and cap hit? Gotta say it, the Zach to Toronto trade was a major surprise, the Bridge release not so much. Great faith by both Toronto in Collaros, and Saskatchewan in Fajardo.

Toronto already has some talent, if they can protect Collaros, they could make the last half of the season interesting.

We have a far better O-Line now than anything Collaros played behind during his time with the Cats. Can’t say the same about Toronto.

Is there still a chance he comes to the Cats? Obviously the cap hit is huge - but for a fourth round pick it seems like a no-brainer to give him a chance (at least the argos thought so).

You would think they will have to release someone to accommodate Collaros’ salary cap hit and for the roster spot. Will be interesting to see who pops up? Maybe Gentleben’s wishes will come true?

Not all of his wishes.

Look for Bethel-Thompson to be released soon.

Count: I’m sure that can’t come fast enough for the Blue team.

I see it as win-win for the Green guys, the Blue team and for Zach…who has likely got his last starting QB opportunity. I hope he stays healthy this time and helps the Blue team become more competitive.

2019 is the worst year for CFL QB injuries that I can remember.