Collaros in town for a few days 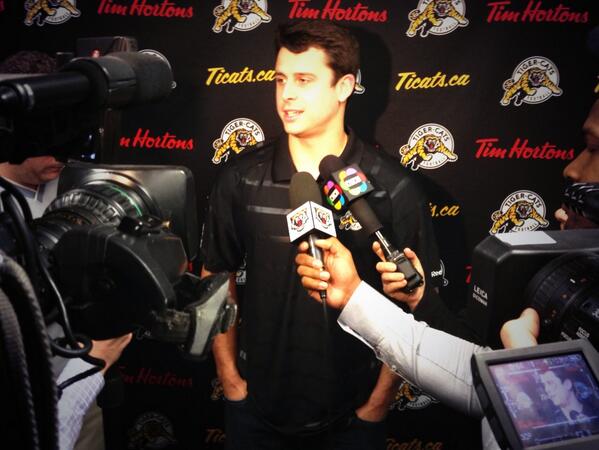 i wonder what he’s promoting while in town?

Is it his choice of shoulder pads? Or, is it because black is so slimming? Or, is it just me?
Zach doesn't look very big here! If I didn't know, and was guessing the position he plays just from this, I'd be guessing kicker.

Hard to measure how someone will perform based on their size. Sure, you can't be 5'2" and play qb in the CFL (I don't think

Hamilton and the Winnipeg Blue Bombers were the two leading suitors for Collaros, who posted a 5-2 record last season as a starter subbing for the injured Ricky Ray.
The six-foot-two, 216-pound Collaros completed 190-of-287 passes (66.2 per cent) for 2,316 yards with 14 TDs and six interceptions.
He also ran 59 times for 246 yards and five touchdowns and was scheduled to become a free agent Feb. 15

I'm not saying Zach's small, just that he looks small in his first full-uniform appearance as a TiCat. Burris, as listed on the RB's Roster as 6' 1" & 190 lbs, is 1" taller and 26 lbs lighter. While I realize that roster listings are often inaccurate (and deliberately so), Henry, more so than most QB's (IMO), had a "broad at the shoulders, narrow at the hip" look in his TiCat uni.

Not that it really matters much in the CFL.