note this title is accurate and NOT misleading!!!

I'm shocked. Thought for sure he was NFL bound after this year. I think he even talked about the NFL prior to the beginning of last season. Huge signing.

Best all round back in the league!!!!!

With the extra two DI spots, and the fact that at least one of our two returners looks to be a starting receiver, if not both, we might be able to dress two international runningbacks. Could make a pretty scary tandem, possibly even having them on the field together at times. Not sure Austin would dress them both, especially with national Woodson also signed. And Austin's tendency to not run the ball much also doesn't support this. But you never know.

With Gable & Grigsby back, Ticats have options galore

[b]All the Ticats' big, bad running backs are coming back.

The team announced on Monday that C.J. Gable, who was the East Division's Most Outstanding Rookie in 2013, has been re-signed to a contract extension through the 2017 season while the Spectator has learned that Nic Grigsby, who was an East Division all-star last season after splitting time between Winnipeg and Hamilton, has also re-signed with the club. His deal is expected to be made official in the coming days.

With Mossis Madu and Sam Ojuri still on the roster – both saw time during Gable's injury-plagued 2014 – the club now has four American running backs familiar with the offensive scheme run by head coach Kent Austin and offensive coordinator Tommy Condell. That's an healthy dose of both talent and experience.

And while it would be tempting to engage in a little pot-stirring by speculating about the possibility of a running back controversy – if such a thing actually exists – the reality is likely far more simple: it's Gable's job to lose.

Though he didn't get much of a chance to show it last season after suffering both foot and shoulder injuries that limited him to just six games, Gable is one of the most versatile backs in the CFL with above average skills as both a runner and a pass catcher. He's also a superlative blocker, possessing both the football IQ to find the right gap and the willingness to get his nose dirty filling it. Then there's this: teammates and coaches love the guy.

Remember, after his outstanding 2013 there was plenty of speculation that Gable would take a run at the NFL when his contract expired after the 2015 season. He's obviously decided, like Brandon Banks and Luke Tasker before him, that he'd rather take decent CFL money over subjecting himself to the human meat grinder and career eater that is often the National Football League.

The only question mark with Gable is, of course, his health. He played 18 of a possible 21 games in his rookie season but last year's unfortunate series of events are enough to raise questions about his durability. There's no question he'll put the off-season work in – just check out his Instagram account for proof – and he'll be eager, as always, to prove the doubters wrong.

Grigsby isn't quite the all-round player Gable is and comes with some question marks as well. Despite posting 744 yards for the Winnipeg Blue Bombers last season, he lost his starting job and was subsequently run out of town amid a typically anonymous hatchet job on his character. It remains an open question as to whether the issue was Grigsby or the turmoil created by the Bombers' late season free fall.

There is, however, no doubt he performed well in Hamilton – including a pair of 93 yard rushing games against Montreal, including one in the playoffs – and was anything but a distraction. Assuming his contract is team-friendly, he provides a top-notch insurance policy if Gable can't kick the injury bug.

Every more compelling: a two-headed rushing monster featuring both players. Health and ratio issues prevented the Ticats from unleashing the dual back sets we saw in 2012 with any regularity last season. Gable and Grigsby could be match up nightmare if Austin and Condell can find a way to get them on the field together. 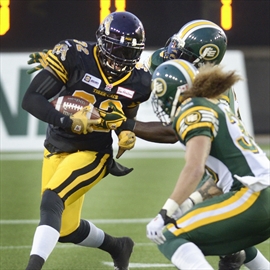 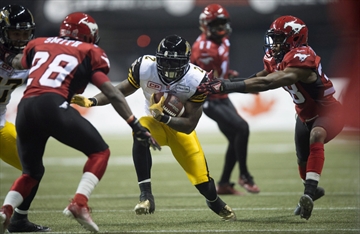 C.J. was playing pretty danged well until the injuries happened, so I wouldn't call it a "jinx", MFTH, more like bad luck. I would consider a "jinx" to be a considerable drop-off in play, similar to a FA after signing a BIG contract...

C.J. was playing pretty danged well until the injuries happened, so I wouldn't call it a "jinx", MFTH, more like bad luck. I would consider a "jinx" to be a considerable drop-off in play, similar to a FA after signing a BIG contract...

I agree with what you said, but I was using the word jinx in terms of his second year not being as explosive as his first. I know it was no fault of his - injuries happen - and can only hope he dazzles us in 2015 like he did in 2013 (East division ROTY). :rockin: :rockin: