I know what you are thinking, so just stop it! :o

“The new ball is virtually identical, to the eye, to the old one. It has the same laces and markings including our stripes. But it is made of a slightly harder leather. Our partners at Wilson say that allows it to hold its pebbles better.?
The new ball may also be just a tiny fraction larger. It is the same length as the old one. But Wilson provides a range for what constitutes an acceptable circumference upon inflation and that could be up to an eighth of an inch larger for the new ball.
During 2017, CFL clubs were given the opportunity to test, at mini-camps and in training camp, the Wilson ball used in the NFL. Feedback from quarterbacks indicated they preferred the laces used on CFL balls but the leather of the NFL balls.
General managers subsequently proposed that the league adopt a new ball that has the laces, stripes and other markings of the old CFL ball but the leather and size of the NFL ball. The Board of Governors recently discussed the change at its winter meetings and the new balls were ordered.
MORE HERE
http://3downnation.com/2018/03/19/cfl-unveils-new-and-improved-footballs/ 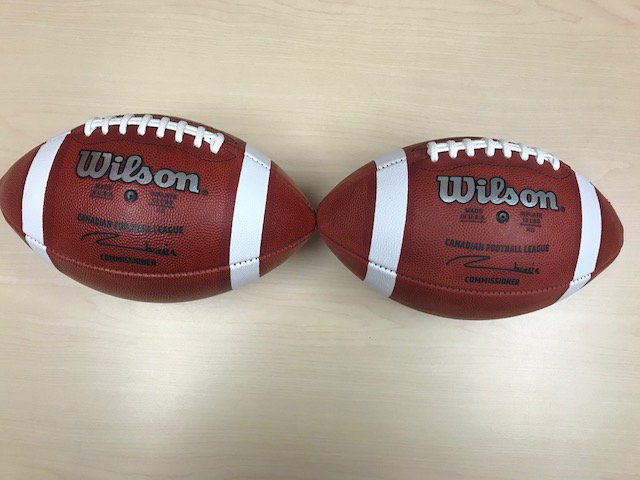 NFL leather with CFL stitching and laces is just a great common sense solution to getting the best equipment out there to make the game better . Nice update .

Absolutely Hank and I like that the league included players with the testing. Nice! Not touting myself but I remember even myself as a 5' 8 incher 150 pound high school player way back when, I was able to throw a spiral with that ball, the J5V, at the time that was much bigger than the ball nowadays, not always of course but I wasn't even a qb. I was a receiver/rb/d back who wanted to be a qb. :-*

As far as the stripes, I don't care, the CFL used a ball with no stripes at one time but if the players don't think the stripes are an issue for throwing or catching, keep the stripes.

Yeah...for me as a collectable I going to buy last years ball...never to be used again. I will try and find a game used one.

not sure what the pros prefer, but I always preferred kicking fatter balls. The bigger they are the harder they fall

I still have my old J5V in pretty good shape.

No pics of the proposed ball? Geez....

Can't rely on the media folks at all.

erm, it says that i anything it is bigger than the old one.

No pics of the proposed ball? Geez....

Can't rely on the media folks at all.

erm, it says that i anything it is bigger than the old one.

our balls havent actually been bigger for while(30 years from whenever this piece was written), in fact the acceptable range has been smaller for some time. fairly reliable source too

Ryan King?Verified account
[ltr]@ryanking46[/ltr]
22h22 hours ago
Ryan King Retweeted CFL
Huge news in upgrading our #CFL footballs - Going to #NFL leather is much better grip when wet/cold/frozen + can be made into much better gameday footballs

Very nice. I'll buy one to.