– All teams need to have their active rosters down to 46 players by 10:00pm ET on Saturday, June 17th.
– The 46 contract players excludes any players on the 6-game injured list and 1-game injured list
– A total of 3 of the 46 players identified must be quarterbacks
– Of the remaining 43 players, a club must carry a minimum of 21 National players
– Up to 10 Practice roster players can be added at any time as of Sunday.

Well for starters, WR Giovanni Aprile has been placed on the 6-game injury list. I have a feeling Craig Butler will be placed on there as well.

I expect about another 9 will join Giovanni on the Injured Lists before this day is done. It's a tough day across the land as indicated by these two, a week apart, tweets from the WPG camp:

Kenny Stafford?Verified account @Kstaff07 Jun 17
Football is a game of ups and downs just got released thank you Winnipeg for the love and support

Drew Edwards?Verified account @scratchingpost 1h1 hour ago
Sounds like Canadian RB Sean Thomas-Erlington has been added to the #Ticats PR while REC Felix Flaubert-Lussier is on active roster. #CFL

Drew Edwards?Verified account @scratchingpost 1h1 hour ago
Sounds like Canadian RB Sean Thomas-Erlington has been added to the #Ticats PR while REC Felix Flaubert-Lussier is on active roster. #CFL

Grov is or man inside. :thup:

Jovon Johnson cut by the Al's

He would look great in black and gold

The Hamilton Tiger-Cats released 23 players on Saturday evening with the most notable cuts coming in the secondary with defensive backs Dominique Ellis and TJ Lee among those let go.

Jovon Johnson cut by the Al's

He would look great in black and gold

I'd be surprised if the Cats signed him, but not surprised to learn that Terrence Campbell, cut by SSK and/or Mitch Gale, cut by CAL is/are coming back to The Hammer.

Another name, I missed among other teams' cuts, who might not be a surprise addition here is Hamiltonian Ben D'Aguilar, a Stampeder special-teamer since being drafted, by them, 13th overall in 2013.

Okay , so a quick look and over view on our roster as it now stands after final cuts :

So right now we are currently 9 players over the mandated max of 46 on the active roster . Broken down assuming that the 2 reserves are 1 Canadian/1 Import it amounts to basically adding 3 more players to the PR which would leave 6 players starting the season on either the 1 gm or 6 gm IL .

Of the nine players over it looks like that 1 QB / 4 Imports / 4 Canadians are going to have to be juggled around between the PR , IL and 6 gm IL to get down to our 46 man active .

Here's where I think those 9 players will wind up to start the season : 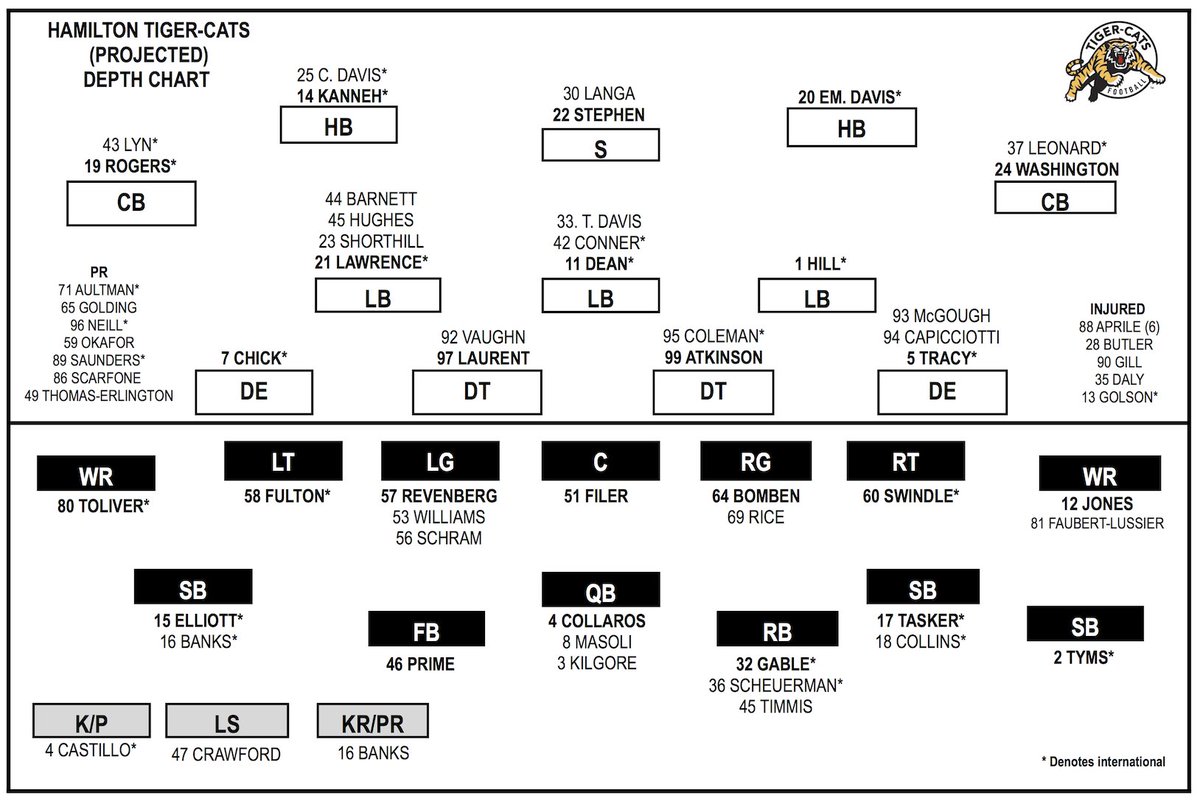 • there are some injury projections here that may or may not be accurate. For example, the team has added defensive back Emanuel Davis from the suspended list but there’s no way to know if he’s going to be ready for week one. Same with fellow halfback Abdul Kanneh, who didn’t play in the pre-season, and Canadian defensive tackle Mike Atkinson, who hasn’t practiced in more than a week. Canadian receiver Giovanni Aprile has been officially added to the six-game and I’m fairly certain national defensive back Craig Butler, defensive tackle Evan Gill and quarterback Everett Golson won’t be ready for week one. Not as sure about national safety Mike Daly but he just started practicing late last week.

• one of the reasons I do think Atkinson will be ready is that the Ticats only kept one American defensive tackle in Davon Coleman, an indicator that they plan on using a Canadian at both defensive tackle spots. If they can’t, they will have to find their seventh starting Canadian elsewhere and this roster will look decidedly different.

• there are 50 players on the depth chart so there will have have to be additional roster moves as the active roster is only 46 players (with 44 on the game day roster.) The Ticats have until Tuesday to add players to the one-game or six game injured list (as do all teams) and they also have three practice roster spots still available. There’s still the possibility they could add a player or two from cuts around the CFL, particularly an American offensive tackle.

• the secondary is a bit of a guess, given that two of the six guys who started last Friday were cut on Saturday (including SAM Dominique Ellis.)

• at least of some these questions should be answered at the Ticats first practice either Monday or Tuesday, with more coming as the Ticats make their final roster moves.

You're legally required to link your sources when you regurgitate content all the time.

Drew has made a stink about such things before, and isn't above doing it again.

The point is that they aren't your words, so always link your sources.

You're legally required to link your sources when you regurgitate content all the time.

Drew has made a stink about such things before, and isn't above doing it again.

The point is that they aren't your words, so always link your sources.

Plus a link alone would certainly shorten the thread. Same could be said about Twitter feeds (although I would believe there are fewer fans who religiously follow feeds on twitter) I would think most who are on these boards are also following http://3downnation.com/
Nothing wrong in principle with what Gover posts. It does save us from going to another site.

Umm, not to split hairs or anything, but the sources were cited as Drew's tweets.

With regard to Drew's ratio concerns, the team could swing Revenberg out to Tackle, or start Capicciotti in place of Tracy, with McGough as his National backup. Neither choice is optimal, unless they want to start two National receivers - which would be a pretty big downgrade to our receiving corps...

You’re legally required to link your sources when you regurgitate content all the time.

Drew has made a stink about such things before, and isn’t above doing it again.

The point is that they aren’t your words, so always link your sources.

I have corrected it, I missed that.
I generally post the source with all of my posts, in this case I missed it.
In no way was I trying to make people think those were my words, but, I think you already know that.

Sinkfield would round off this Offence nicely!

The Practice Roster grows by one ..... a RedBlacks' castoff: