Currently watching the Eskimos/Lions game and there seems to be more empty seats than filled. Wasn’t there a time when the Esk’s sold out just about every game? And…Is the overall attendance in the league going down? It seems that way with the games I watch. The Al’s expanded to 25,000 and never sold out and now the stadium has been “shrunk” back to 20,000 seats. Arguably the Als haven’t put a decent product on the field since Calvillo retired. But I digress. Is this league in good shape anymore? Are the fans losing interest? Are the owners trying to do the right things? Is Football losing popularity in Canada?..Thoughts?

this board generally represents the most hardcore cfl fans.

certainly not the average.

and I’d say in the Ti-Cat sub forum, less than 50% of the members actually regularly attend games.

and again, these are the biggest CFL fans.

yes, due to the aging fan base, in game attendance is dropping.

teams are doing what they can to improve it.

Currently watching the Eskimos/Lions game and there seems to be more empty seats than filled. Wasn’t there a time when the Esk’s sold out just about every game? And…Is the overall attendance in the league going down? It seems that way with the games I watch. The Al’s expanded to 25,000 and never sold out and now the stadium has been “shrunk” back to 20,000 seats. Arguably the Als haven’t put a decent product on the field since Calvillo retired. But I digress. Is this league in good shape anymore? Are the fans losing interest? Are the owners trying to do the right things? Is Football losing popularity in Canada?..Thoughts?

Conveniently forget the near sell-out in Ottawa the night before!!

Doesn’t commonwealth stadium hold close to 60k? So, with 30k fans or whatever it was, OF COURSE it looks half full because it LITERALLY IS. That’s still better just about everyplace else.

These kind Chicken Little OMG the sky is falling posts are so pointless, and inaccurate. I can see why some think it’s trolling.

I saw a tweet saying attendance last night was 24016. It also said this was the second lowest attendance in 20 years in Edmonton. Not sure if anyone can verify this.

While that number is still in line/above the league average, it’s pretty disappointing. They had a similar number last week I believe.

It’s not the end of the world, but it would be dumb to completely ignore the decline Edmonton is seeing in their first two home games.

As long as the TV revenue keeps up, then it’ll be a “new norm” with audiences around 20K to 25K.

I think the days of 40K plus fans are long done.

But when those days were around, the TV experience was much different (less).

It’s disappointing for sure and I believe the issue is league wide and not just the CFL.

MLB is down for a 4th straight year, MLS most teams are down and some of the biggest trouble spots are the large US markets outside of the newer expansion cities. All 3 Canadian based teams are down too.

I’m wondering if this is even bigger trend than just sports. The Brick and mortar type of business is general where you have to go to the venue to business (i.e. actually attend in stadium). Traditional retail stores are suffering and closing while people by on-line. Movie theatres struggle to get people to come in outside of the big blockbusters but you can buy digital versions to watch at your convenience.

Back to sports, leagues strive to grow revenues in other means, hence the 2.0 plan to drive more $$$ internationally one small broadcast deal at a time and other sponsorship deals around the world. Time will tell if sucsessful.

As a long time CFL fan I think attendance is trending downwards.B C opening game had 18000 and that’s with arguably the best quarterback in the league. Unfortunate you have contingent stemming from Toronto, B C and Montreal. I’m very worried about this league. It could end up like the Canadian basketball league or Canadian soccer league, it’s great Canada has these domestic leagues , but who cares. The popularity of the main leagues in theses sports overshadow the domestic leagues.The world has become a smaller place. I’m not sure what the answer is.I understand what the Commissioner is try to do. The league has become to provincial and he’s trying to make it more international. I applaud him for trying, but it’s an uphill battle. Also the make up of the country is made up of people coming from countries were they grew up watching soccer not football. I will leave these questions up to smarter people than me. Thank you for your time.

Although I know this isn’t in any sense a direct comparison at this time but I do believe that some of professional sports will be to do what shows like Dr. Phil or late night interview shows, have a small studio but concentrate as much on delivering the show on television and digital and what have you. So a 5,000 seater or so say in the CFL would work. A studio-style stadium if you will. Sounds ridiculous but I don’t think so. It will take reimagining as television screen and computer screens become more awesome and cheaper.

But such is a huge paradigm change and for that to happen sometimes something needs to die first and then be resurrected as an almost different entity.

Check this out in Hungary, 4500 capacity:

“Home to Puskas Akademia FC, the youth side of Videoton, the Pancho is utterly remarkable. It has a capacity of just 4,500, but its curving, wood-lined interior, designed by legendary Hungarian architect Imre Makovetz, gives the feel of a place of worship.
Pancho was Ferenc Puskas’s Spanish nickname, and there is no doubt who the deity is here: the Mightiest Magyar’s possessions are on display inside, making it part cathedral, part museum and part wonderful sports facility. Opened in 2014, there’s nothing else like it anywhere.” 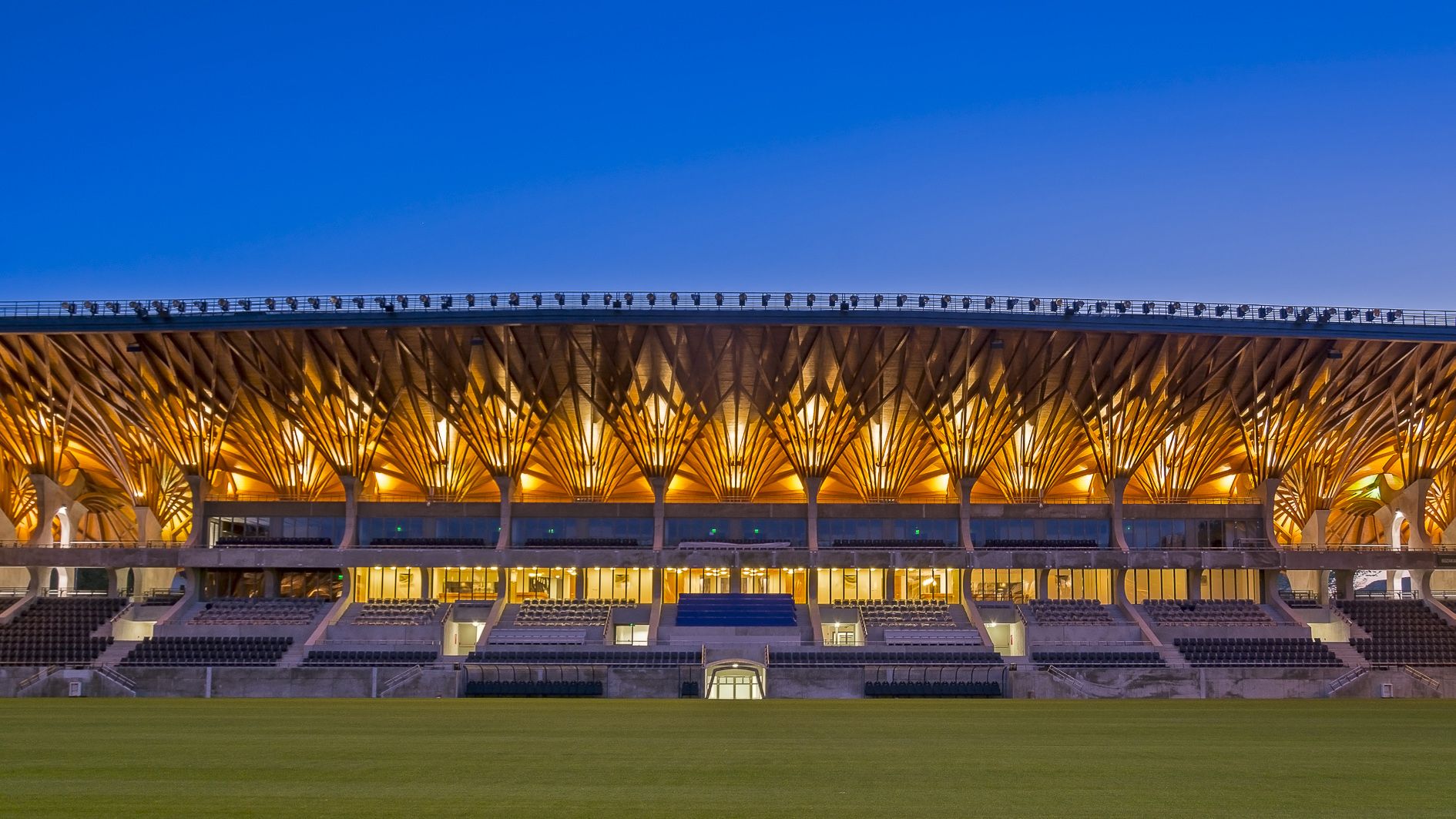 The league (as usual) did an absolutely horrible job promoting opening week of the league. Now there was other major sporting events going on at the same time, but still, so much more can be done to ignite interest.

The fan base is aging and attending games is not seen as “cool? for the younger generation.

All teams need to look to Ottawa that is building quite a nice following with the younger generation. And that was in a market where the Fan base had been abused for generations.

A lot of the other, more established clubs seem to be doing next to nothing to cultivate a better game day environment at the stadium that will attract the casual modern day sport fan.

Until this changes, attendance will continue to slide

The mean age of the crowd is definitely under 45. (target market these days)

Bob Young is doing it right…even though the dino’s are complaining that the music is too loud, too many fans being shown on the screen, too many fans enjoying themselves in the concourse and other GA areas, crowd not loud enough on Defense, fans too loud on Offense…etc, etc, etc.

It’s tough on owner groups to try and appease the old guard while trying to build a new guard.

Doesn’t commonwealth stadium hold close to 60k? So, with 30k fans or whatever it was, OF COURSE it looks half full because it LITERALLY IS. That’s still better just about everyplace else.

These kind Chicken Little OMG the sky is falling posts are so pointless, and inaccurate. I can see why some think it’s trolling.

This… and it’s sad that someone would need this explained.

This… and it’s sad that someone would need this explained.

Its a fact that there were significantly less people there than a “typical” Esks game. In the past Commonwealth would be about 50% full. The two games this year it’s been around 40% full. It’s a pretty obvious difference.

In Hamilton and Ottawa they’ve done well at that sort of thing.

Overall revenue for Ti-Cats games with crowds likely 5,000 per game less that 10-15 years ago at Ivor Wynne - likely way higher per game because of club seats, sponsors etc. And as others have mentioned the median age of the crowd has likely dropped by at least 10 years. It is considered fun and cool to go to a Ti-Cats game.

They do a fantastic job of marketing the team. The team is VERY active on social media and all kinds of banner ads pop up for the Cats as I surf the web. I think I’ve received 5 emails from the team the last 10 days or so promoting various things.

I’ve seen promotions for everything from a last minute Father’s Day Flash Sale of Ti-Cats gear to the Black & Gold Ladies Huddle Events and of course great promotions for upcoming games.
-https://www.fevo.com/edp/2019-Black-and-Gold-Ladies-Huddle-a3aSmFP?camefrom=EMCL_2953416_141580639

And their ads are so well done in terms of being eye catching and targeted well too. They really do a great job with that. Here samples from just this week alone.

Eye-catching promos for the next two home games. Both great promotions.

It’s a lot of work these days to attract and to keep the attention of younger fans. The Cats are very good at it and the result - lots of millenials at their games.

This will help with future Canadian expansion as the numbers to sustain the team will be a lower threshold .

It’s also good for atmosphere and demand when there is less inventory .

33k at Winnipeg and Saskatchewan make sense they usually get higher turnout and when they host a Grey Cup or any other event they will not have to add too many seats .

The days of 35 k with Landsdowne Park in Ottawa are long gone . The 24 k now just feels right . They could add another standing area in the other end zone like the pilsner area in Regina but that’s about it .

CFL is looking like it’s in trouble again, as interest is waning. Ambrosie and Rhodes thought moving up the season would be a big boost, but I still haven’t seen any evidence of it, and it actually seems to be getting worse, as I predicted.

Yes, I think it’s a no brainer to leave the season alone, and put more Sunday games back on. No one had any problem with that except for , like usual, a few loud complainers, seem to always get there way .

I’d like to wait till the end of this season before saying it’s in trouble, I’ve seen that teams have done a little more this year with advertisement but it won’t help over night itll take a year to actually show results, when Calgary plays in Edmonton there’s one of the largest turn out all year, hitting mid 30,000 same for Saskatchewan and Winnipeg, and Hamilton and Toronto, but the one thing that the teams have yet to do, is that the CFL isn’t cool enough to pay big bucks for tickets, places like Vancouver, the lions over charge like crazy for ticket prices, I’ve heard that Toronto been doing some what better in early season promotions, so hopfully that changes,

Lots of concerning trends occurring with CFL attendance, especially with the league being so gate dependent. This will be a good thread to update on a weekly basis to see what trends emerge as the season progresses.

So why again was it considered desirable to start the season in mid-June? A mid-July or later start was always just fine.