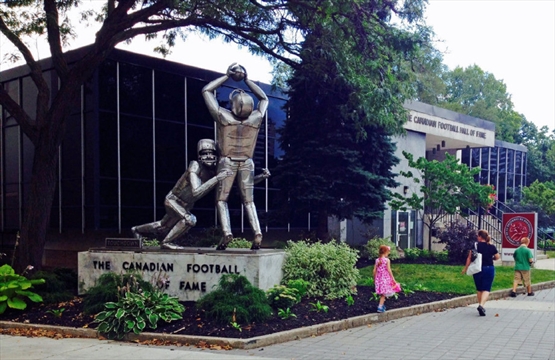 By Scott Radley
[b]He was sitting in his office at the Canadian Football Hall of Fame the other day when the front door opened and a crowd startled trundling in. Close to 20 people in the group, he estimates.

Considering how rarely this happens at the less-than-bustling museum, the man in charge got a little excited.

"Oh," Mark DeNobile quips about his immediate response. "I beat my (average of) 2.9 people per day."

Alas, it wasn't really to be. No sooner had they arrived than the visitors pulled out measuring tapes and notepads and started charting the dimensions of the place for the offices that would soon be built in there. Not fans, it turned out. City workers.

The fact that a crowd of any size would catch the executive director off guard pretty clearly explains why the place is closing. It costs money to run a facility like this. A lot more money to update it and make it an attraction. The way you make that cash to improve is by bringing in hordes of fans. But if it's not modernized, who really wants to pay to see it?

So on Saturday afternoon shortly after the Tiger-Cats kick off against Edmonton a few kilometres away at the shiny, new, multi-million-dollar Tim Hortons Field, DeNobile will get up from his desk, walk the few steps to the front door, and turn the lock for the last time.

It'll likely be a bit emotional for him but don't expect any tears.

"I'm really looking forward to the changes," he says.

Next week, all the artifacts on display on the main floor — including the 278 busts of the inducted members — will go into temporary storage somewhere else in town. The items in the basement storage rooms will remain on site.

Then those changes he's talking about will start. DeNobile has already received requests from CFL teams asking for travelling displays of team-specific memorabilia to show at their stadia. Plans are already in the works to package some stuff up and send it on loan. That'll take the hall to the people rather than waiting any longer for the people to come to the hall, which is a fantastic idea. Long-overdue, too.

A larger collection will be put together for the Grey Cup in Winnipeg.

"We just got the word we're going," he says.

That display will almost certainly include the ball then-Bombers' quarterback Matt Dunigan used to pass for a record 713 yards in a game back in 1994.

Why does that matter? Well, it illustrates pretty clearly why these changes could be very positive. That historic ball, for example, has been sitting in the hall's basement for 20 years. Tucked away and carefully preserved, but out of sight nonetheless.

"It hasn't seen the light of day since that day," DeNobile says.

Now it will. Now all kinds of things like this will get showings across the country where they can be appreciated and where fans can be prompted to relive so many great memories by seeing precious pieces of meaningful games and tangible evidence of wonderful moments.

On top of everything else, planning will now get started in earnest about how to build the facility at the north end of Tim Hortons Field — under the scoreboard — at which the busts will all eventually find a home. Plans are for it to be open even on non-game days so anyone can visit, any time.

In the meantime, he doesn't expect a last-minute surge of guests on Saturday. A few Edmonton Eskimo players might drop by in the morning on the way to the park since they're in town. A few misty fans with childhood memories of the place might pop in. That's it.

That's kind of sad. The hall has been on the same site since 1968. It's a landmark, even if it's largely ignored and way behind the times. Its closing really is the end of an era and marks the closing of a chapter in this city's history.

So as he locks the door for the final time and flicks off the lights, will The Last Post be playing while teams of cheerleaders do their thing, city councillors lower the flag, and balloons and a flock of doves are released?

Scott Radley ?@radleyatthespec 14m14 minutes ago
Hall opens at 9:30 today for anyone eager for one final tour, possibly on the way to #Ticats game

Man I hope they put that statue somewhere on site

Man I hope they put that statue somewhere on site

Good point down at THF

I was at the city hall plaza CFHoF once. I never went back. I think I will go a couple of times a year before Ticat games now that it is moving to THF.

Sending parts of the "collection" to other stadiums on loan should heighten the awareness of the FHofF and bring more visitors to the new site in Hamilton as well as be an attraction for those who are coming from out of town to see games. THF is going to be a much improved site for the Hall. Sad that a portion of the collection has been in storage for so long, but this plan should bring far more of it to "light".

When one door closes...another opens...lets hope the HOF door at Tim Hortons field is a lot busier.

Went there before the game, and it’s time. The busts and the old trophies were interesting and the best part of the facility. Less impressive was some of the exhibits and dated “modern” player profiles. Glad I got to go before it’s gone, but it’s very clearly time. Got a CFHOH pin and a last Hamilton Grey Cup pin while I was there.

It's definitely the end of an era. I look forward to visiting it once again after it has been re-established at THF!