Looks like the developer of CFL 99 and Maximum Football are back with a new game approved by Microsoft. The story gets into more details.

Its finally happening! Hopefully the CFL will license it. Or at least be customizable like maximum football (edit: after further reading there will be an editor on pc and mac, will be available for ios and android to as well as Xbox one and Windows 10)

Why pray tell is it pathetic?

Seeing as you know so much about it how about sharing with us your vast knowledge of this project.

For once I agree with you Bungle. I've seen shots and gameplay before from this project some time back when they were looking for funding and it simply was just an outdated game made in 2016.

I more than any human being wants a CFL video game, I've spent countless hours creating Cfl teams in Madden and NCAA teambuilder, but this game just won't even come close to comparing and it won't be for a lack of effort but moreso funding.

Not trying to hate it's a great idea and people have been chasing the idea for a long time but you can't put an outdated product out on the xbox one or it just won't sell.

I hope I am absolutely wrong and I end up buyng and loving the game, but I am pretty confident that sadly won't happen.

For what its worth, if I were making a CFL video game I’d lean heavily towards an arcade style play kind of like Nfl blitz. Don’t try and compete with what Madden is producing nowadays because you won’t. Gotta come up with a fun medium between Sim and arcade football with the joy of playing with your favourite CFL team. It would make a lot of people upset not to get a full Sim experience that we are used too, but if done properly a game can become legendary such as NFL blitz or NBA Jam.

You have no idea what youre talking about.

The guy who made this game made maximum football and that game is great i was playing it for hours last night.

You dont need money to program a game. They already have support from microsoft that gave them development tools.

The game is said to look and play like NCAA or Madden.

The bottom line is that the CFL is cheap, and could not even spend 1% of the 200million dollars it received from TSN to actually try to sell the game to people under the age of 50
When the CFL is no more, critical mistakes like this will be pointed at as for the demise of the league
This league dies,when it's fans die, because no one is replacing them

It does not matter how good this game is, or if geeks like yourself enjoy it
A CFL game needed a big budget, and needed to make a splash with the cool kids, to create buzz
Some Rider fan geeking out in his basement, does not make the CFL attractive to a 12 year old kid wearing a Steph Curry jersey

Multi platform capability is needed so it fits for Play Station , Xbox etc .... for it to be acceptable for mainstream gamers .

Carbuncle, as usual, talking out his ass about something he has neither seen nor knows about, and with a full year of development (or more) to go. Why????

Multi platform capability is needed so it fits for Play Station , Xbox etc .... for it to be acceptable for mainstream gamers . 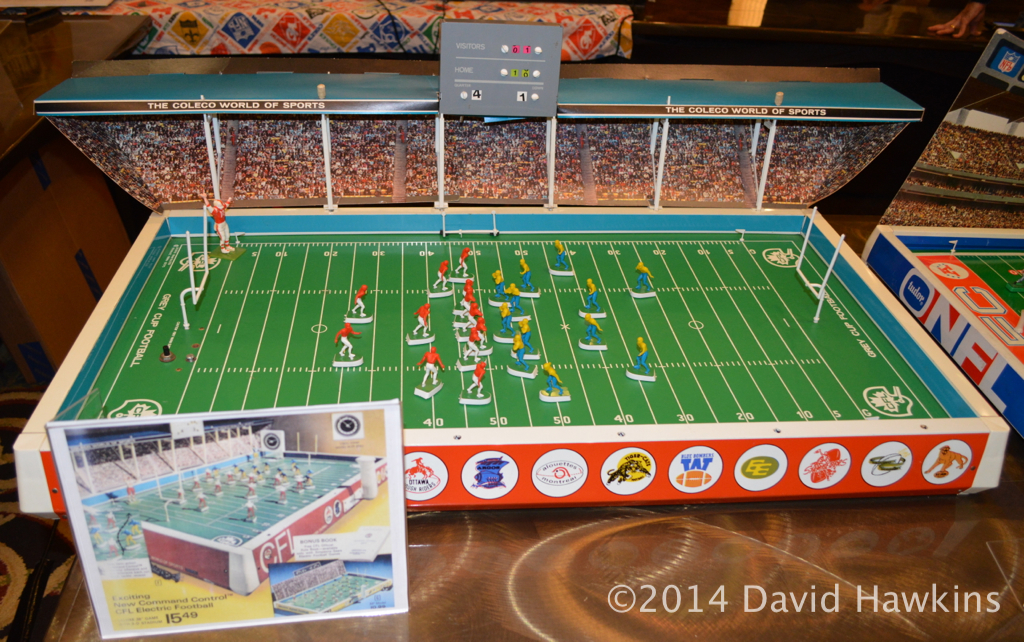 I've gotten a sneak peek at the prototype and frankly the game looks amazing! It has multi-platform capability, heck you could prop it up on any coffee table or nightstand. This game could attract a whole new demographic to Canadian football! :thup:

CFL should be behind this full force. Yes go head to head with Madden. People will pick this up not knowing what the cfl is or what its about and might fall in love with it and start tuning in. I myself have been one of he many hopefuls of a CFL video game and am thankful that I have an xbox one (as it seems its going to be an xbox exclusive).

I've gotten a sneak peek at the prototype and frankly the game looks amazing! It has multi-platform capability, heck you could prop it up on any coffee table or nightstand.

I remember as a kid wanting one of them. i don't seem to recognize the Calgary and Sask logos. Notice the old Ottawa logo and that weird 70s Als logo.

Actually had one of those when I was a kid. Brings back memories. I remember it also came with a mini plastic Grey Cup and full size poster.

Thank God for Youtube. A kid can see what a toy is like before asking. If I hadn't have seen that electric/magnetic football game in action I would have been disappointed 30 secs after starting to play with it.

Multi platform capability is needed so it fits for Play Station , Xbox etc … for it to be acceptable for mainstream gamers .

Microsoft is helping with development tools it says is part of it. Some sort of approval with Microsoft they got.

Its not just for Xbox one tho. Its for windows, IOS (iphone, ipad) and android looks like. So not just xbox one

I would be happy with Tecmo Bowl from the Nintendo system in the early 90's . Loved playing it back then . Gave the system away many years ago . NFL films has a segment on people who still play the game in tournaments to this day .
Great game to play just make it a CFL version .

I played NFL Blitz in arcades it is also a fun system .

Had the old Coleco Magnetic /Electric CFL Football in the 70's but it was horrible .

I am sure the CFLPA and the CFL could collaborate on a good system that gets players and fans an outlet for playing
first person or sims that would be entertaining to play and complimentary to the players in the league . Another way of recruiting players south and north of the border . Everyone has a ego and would love to have something like this as an added bonus . Plus this maybe a way to help with CFL pensions if it is big enough .

You dont need money to program a game. They already have support from microsoft that gave them development tools.

The game is said to look and play like NCAA or Madden.

Anyone actually in professional game development would die laughing if they saw these two statements together.

Unless you're working for free and have someone else paying for things like food and power, it absolutely takes money to program a game, especially if it's going to "play like Madden". By time one guy makes something up to Madden's level, the Xbox One will be obsolete.

And, that's not even the biggest expense. Programmers can't make something that "looks like Madden". You need artists for that. With computers and software. All of which costs money. Plus, the artists themselves. Graphics at that level are thousands of man-hours of effort.

People need to set expectations to something realistic, because it's flagrantly obvious that almost nobody in here is a programmer or knows a bloody thing about game development. This will look and play like an indie game. And you know what? That's fine. That means they don't need to sell a million units for it to be a successful project.