Fact- The largest Canadian flag ever made, according to Flying Colours International, was recently unveiled at a football game in Hamilton, between the Hamilton Tiger-Cats and Toronto Argonauts. The flag was 38 metres by 76 metres, and required at least 80 pairs of hands to carry it on to the field. This flag will never fly -- it's too big -- but it will be brought on to the turf at Ivor Wynne Stadium, the Ticat's home base, for the start of every home game. A flag that size costs $15,000. 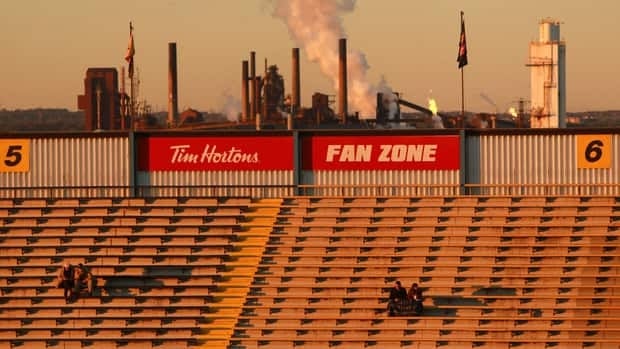 I'm going to regret asking this but just what is it about that 2 year old article that has you upset?

I'm going to regret asking this but just what is it about that 2 year old article that has you upset?

I would think he was upset that the CBC would take a picture at IWS of the stands showing all empty seats. Why didn't they take the picture after the stands were filled and a crowd cheering the large Canadian flag.

And the industrial background

And the Fan Zone sign smack dab in the middle of a picture showing all empty seats and 4 lonely fans in the stands.

Personally, I find it amusing that a public broadcaster funded by our tax dollars never covers the Cats except as an away team - if it covers the CFL at all. It makes sense that the local CBC radio station is in Toronto, but all of Hamilton and Niagara are in its broadcast range. The Toronto-centrism of the CBC driveslots simply rubs in the fact that two of Canada's largest metro areas have no CBC service. But hey - I guess we should be elated that we can even get CBC Toronto. Apparently, "Canada" lives there.

I agree, ever since the tax network lost the league, their coverage has been abysmal.
In fact, when they had the league it was only marginally better.

I have to chime in here and give the Ceeb credit for fantastic Olympic coverage. As I have stated in another thread I have cut the cable cord. Unfortunately, I am in one of the few places in the country where the CBC did not replace it's transmitter with a digital one and thus have no local English CBC service.

I am able to finagle the BBC and American networks online and was planning on watching their Olympic coverage forgetting that CBC was host broadcaster for Canada and not the unholy $$$ alliance.

By chance I was at the CBC website looking for news on the opening ceremonies and realized they were the Canadian rights holder. The CBC website is fantastic for recording and streaming (live and recorded) most of their broadcasts. I found they are streaming pretty well everything live and recorded. It's a fantastic service for me and I have told several people who weren't aware and many have come back to me thanking me and saying how good it is.

They even have Canadian athletes performances marked on the streams (or goals in hockey) so I can skip to them. Also, ssshhhh, no commercials. I am sure the other Canadian cable services and networks wouldn't do that.

I'm always amazed at that flag when they trot it out onto the field with a hundred people to spread it out. The flag the Argos have is pathetic in comparison.

As afar as Olympic coverage goes, it's okay. I can't stand CBC HNIC hockey coverage and Don Cherry is an out of touch bore! They trot him out before games like he is the Pope of hockey or something. And what is with the screaming hockey kids before every broadcast? Next time, leave Cherry at home, the nursing home! Sorry for my off-topic (sort of) rant, but he needs to go!