VANCOUVER — A pair of pick sixes from Marcus Sayles and TJ Lee combined with 341 return yards from Terry Williams led the BC Lions to a 40-32 win over the Winnipeg Blue Bombers on Saturday night at BC Place.

This is a companion discussion topic for the original entry at https://www.cfl.ca/2022/10/16/campbell-credits-defence-special-teams-in-lions-win-over-bombers/
PorkyPine October 16, 2022, 6:18am #2

I wonder if Ottawa regrets not keeping Terry Williams around now that Dedmon's hurt? (rhetorical question). The offence is going to be a big concern for me moving forward.

Congratulations to coach Rick Campbell and the B.C Lions who defeated the Bombers at home in Week 19.

The defense and special teams were the keys to success. My game ball goes to Terry Williams who had an amazing 341 return yards for the Lions on the night. 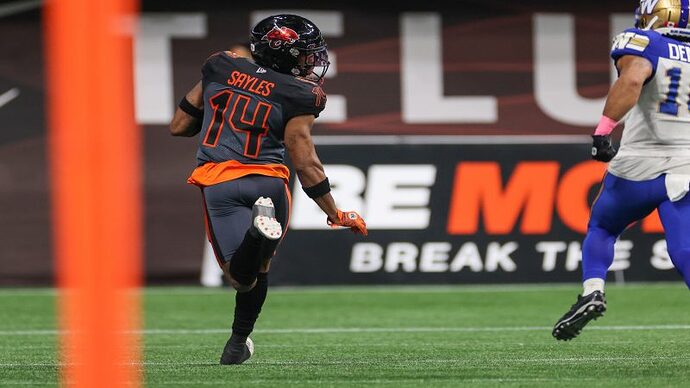 Congrats on (Narrowly) Beating the Bombers B team, for an arena-based football team you looked ok at best. Let see when you have to play a real Canadian game outdoors and in the cold and freezing climates of Winnipeg I am sure the pussycats won't like real football!