Team has 2 practices scheduled before the Stamps game: Wednesday and Thursday.

According to Herb Zurkowsky, Philip Blake replaced Jacob Ruby at LT during today's session. Ryan White moved into LG in place of Blake. Jeff Perrett mentions that one of the guys is still injured. That could be a possible explaination why Luc Brodeur-Jourdain has been mostly an afterthought since his return to the active roster.

“Most time, young guys aren’t forced to play this early. It’s just a product of the situation we’re in,? offensive-line coach Kris Sweet said. “You have to fight through it.

“They work hard. They’re doing everything I ask them to do.?

“Ruby’s a great player. He may have struggled the last game, but he’s a good player. I have no doubt of that,? said (Philip) Blake, who played right tackle, then centre, at Baylor.

“On Saturday, I had a bad game and hit a rut. It was technique, not being mentally tuned into what they were doing. We knew what they were going to do. They did a few things different. It came down to me having a bad game and not playing well. We have two weeks left. I’m going to try and get better, become the best player I can.?

“I don’t think we’re bad. We’ve struggled in some areas but, for the most part, we’re pretty solid,? (Jeff) Perrett said. “One of the guys is in Toronto. One of the guys is injured still. We had four guys at four different positions. Two rookies. One’s a second-year guy and another’s playing centre for the first time.

“I guess you could use those as excuses. There had to be some growing pains expected, but I don’t know. We’re professionals. We should be better.?

“It’s normal. He’s a young guy. At the same time, I think it was obvious that when we made a change, we were able to perform in a way that gave the quarterback a little bit more time to do things,? (Jacques) Chapdelaine said. “We want to continue to explore that.

“It’ll be interesting to see what happens when a guy like Blake gets a full week of preparation as opposed to being tapped on the shoulder and told you’re up, you’re next.?

Ruby reminds me a lot of Rottier and I think his future is inside. I certainly would not give up on him. I think the Als should look at how Edmonton built their oline.

They haven't been helped by the playcalling this year either. No consistent run game, a stubborn refusal to call screens and crosses with the young QBs under center, no draw plays or option-read packages.

Article in French on the possibility that this could be Luc Brodeur-Jourdain's last home game as an Al since he is due to become a free agent following the season. LBJ wants to come back next year, but the team is noncommittal.

Stamps start 2nd stringer Drew Tate at QB against the Als. Considering that the Stamps' originally intended to replace Henry Burris with Tate, one would think that he would have more than 6 passes this year. For comparison sake, Adams has attempted 33.

Herb Zurkowsky says that Raymon Taylor has an thigh injury and could be replace by Khalid Wooten. Yesterday, he wrote that Jake Piotrowski was still having vision problems and would likely be a healthy scratch. That would seem to explain why Ryan White was inserted at LG instead of Piotrowski. Jacob Ruby will still dress despite not starting. Anthony Fera and Martin Bédard are not expected to be back for either of the final 2 games.

-A win by Calgary will set the record for most wins to close out the season (15).

-Calgary winning would tie the record for most wins in a season. Edmonton was 16-2 in 1989.

-Bo Levi Mitchell has the record for most consecutive unbeaten starts at QB (16).

-Dave Dickenson has the most wins for a rookie head coach (15).

-Als have played 9 games this year where the opponents have scored 23 points or less.

-Montreal is the only team without a 4th quarter winning drive this season.

-Als have given up a total of 4 points in the 1st quater over their last 5 games.

-Montreal have allowed all of 4 TD's in the 1st quarter this year.

-Since Anthony Calvillo's last start in 2013, the Als have played 64 games and used 9 different starters.

-Believe or not: Als are the only team in the East that has 3 wins against the West. The rest of the East is 6-19-1 verus Western Teams.

-After last week's game, Bear Woods was tied with Solomon Elimimian for most tackles this year. However after review, Woods was given 2 more and Elimimian one more tackle. Thus, Bear Woods has a one tackle lead in that race.

-Stamps have trailed by 5 points or more twice all year.

-Rene Peredes has 54 field goals made this year. Justin Medlock has 55. Both are within reach of the league record of 59 set by Dave Ridgway in 1990.

-Andrew Buckley needs 1 more rushing TD to set the record for most in a season by a Canadian QB.

-Jamar Wall has 17 pass knockdowns which is one short of the league record 18.

-Stamps are the only team in CFL history to win 14+ games 4 years in a row.

-A 151+ reception game by DaVaris Daniels would make his season total over 1000 yards. Daniels would have accomplished the feat in 11 games and would set a record for fewest games played and reaching 1000 yards.

-Stamps have a chance to set the record for fewest turnovers in a year in they commit 0 against the Als. Team has 22 for the year, and record is 23 set by BC in 2012. Winnipeg currently has 23. 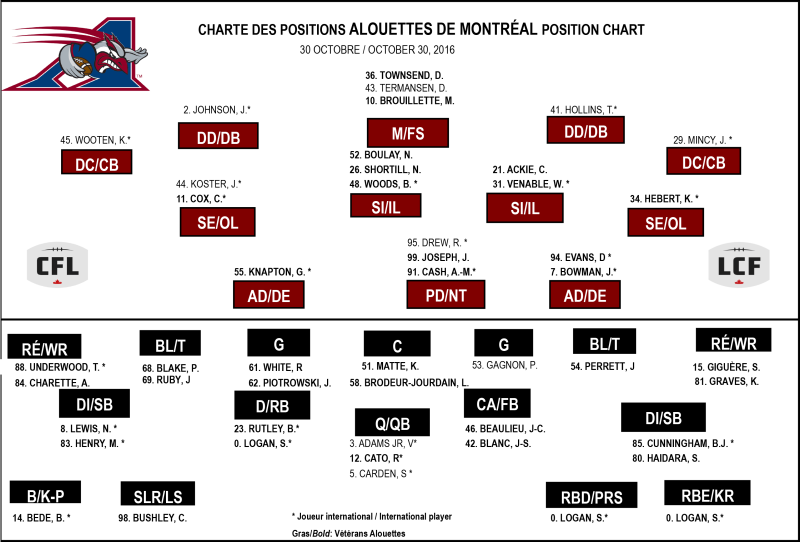 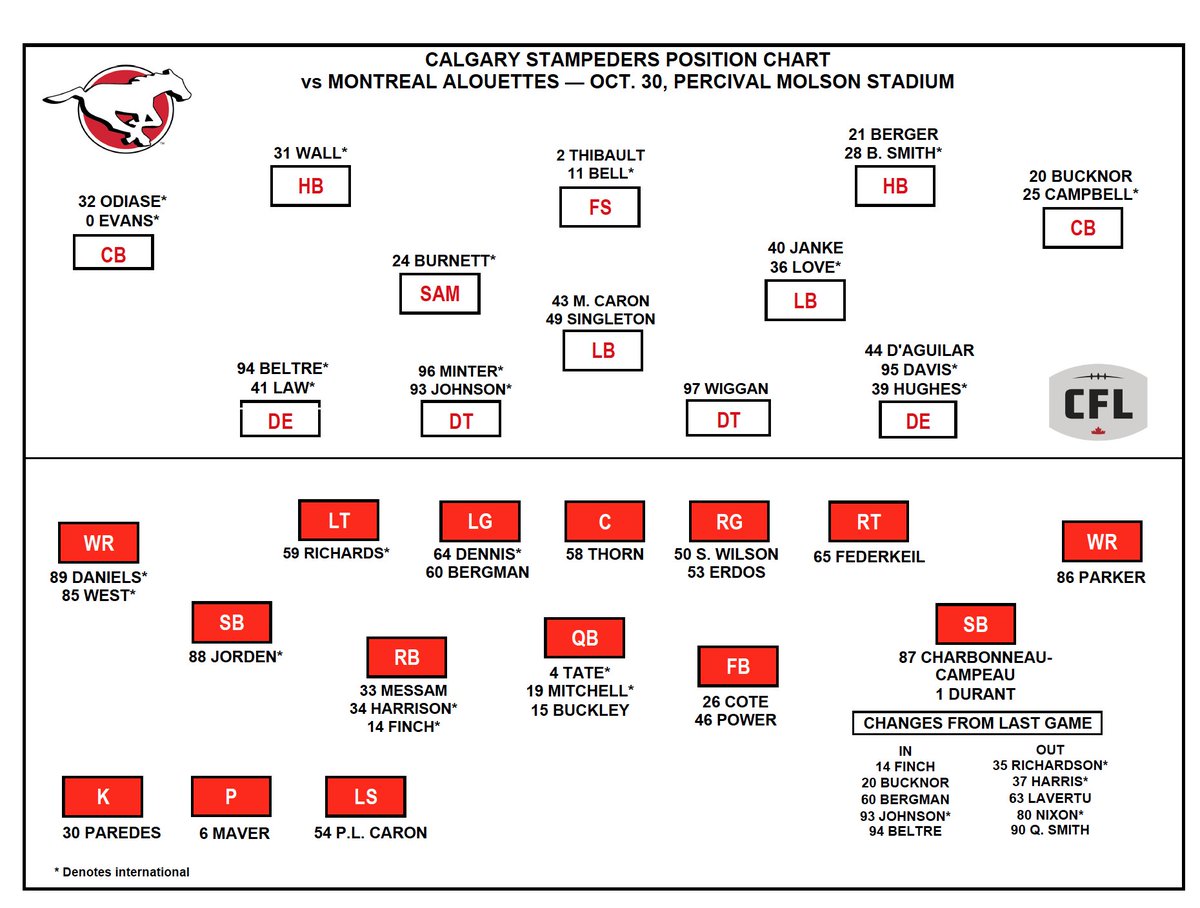 Adams and thick Nick lead to a good drive and touch down . 7-5 Als .

Adams showing an improvement from last week in keeping his eyes downfield while running for his life and (when he isn't immediately buried by a defensive avalanche) getting rid of the ball when there are no options. Those are often amongst the hardest things for young QBs to be able to do at "game speed".

Also, I don't recall the Als using as much of the "false start" count to draw the defence offside, or at least show their scheme, with Cato.

Starting to think that if we could put them through the teleportation machine from "The Fly" the Als would either get a CFL All-Star QB or a younger, shorter Jonathan Crompton.

Adams injured and Cato in .

What kinda punt was that from Bede .

Hope everyone enjoyed the fourth quarter. The Thundercunts at RDS left the game for the Impact and I missed everything after Cato's monster run.

I just can't believe it... The lack of professionalism at TSN/RDS is mind numbing.

Glad they won, hope Adams knee isn't wrecked and Cato looked fantastic (the part I saw anyway) Not sure what to make of Carter and Popp on the sideline... Popp should have watched from the booth and Carter should have watched the first 3 quarters on RDS like me.

Do you have the TSN main channel ? It didn't change for me on that channel . I have Shaw and all 5 TSNs and RDS though .

Not sure what to make of people not being able to see some of the games this year . I think only two of all the games
this year were off on TSN2 .

Seeing Carter there was really strange . Maybe he is on a ghost suspension . It is Halloween .

In Niagara TSN 730 carries the Als games. However I missed a BC/Als game, calling TSN, I was told that" RDS owns the rights to this game" However looking at the Cogeco site I noticed TSN was carrying the game on 416. 416 is also TSN but, likely in another area. Today the game was on both TSN channels.

Hope Adams is OK. Best part of the game for me was Cato coming in, taking charge and looking good, and silencing all the people who said he didn't have it.

Brandon Rutley is not a feature back. He can't make the yards and he sheds blocks about once every 10 games. That 4.5-yard average actually flatters him, since it was most acquired in the fourth quarter. Earlier, he was getting nothing at the line of scrimmage. And he can't pass-block either. Cannot understand why the team keeps on with him.

We lost the time of possession battle yet again.

Knapton had a monster game. Six tackles, two sacks, and he was just always where the play was.

Way fewer penalties per game since Chap took charge, it seems to me, and that's to his credit.

That first quarter was pitiful on offense, and subpar on defense. Offense did absolutely nothing, and defense couldn't get off the field.

Both Harrison and Messam ran for 6 or 7-yard averages against us all game. If Chap is back as head coach, fixing our run defense has to be a top priority. We just can't be giving up yards on the ground like this game after game.

Do you have the TSN main channel ? It didn't change for me on that channel . I have Shaw and all 5 TSNs and RDS though .

Not sure what to make of people not being able to see some of the games this year . I think only two of all the games
this year were off on TSN2 .

Seeing Carter there was really strange . Maybe he is on a ghost suspension . It is Halloween .

I was watching with time shifting so by the time they switched the game was over in real time. I would have had to watch the whole thing again since you can't fast forward when time shifting. I recorded the RDS broadcast but its useless as its missing a quarter of the game... they should have started their soccer game on the second channel.

Hope everyone enjoyed the fourth quarter. The Thundercunts at RDS left the game for the Impact and I missed everything after Cato's monster run.

Johnny recorded the game on his PVR and lost the last part of the game like you did! Just absolutely awful!

I just can't believe it... The lack of professionalism at TSN/RDS is mind numbing.

Glad they won, hope Adams knee isn't wrecked and Cato looked fantastic (the part I saw anyway) Not sure what to make of Carter and Popp on the sideline... Popp should have watched from the booth and Carter should have watched the first 3 quarters on RDS like me.

[i]What the hell is Carter doing there on the sidelines? Did the Als secretly punish him for the rest of the year (while saying publicly he was cut) and have an agreement to bring him back next season?