I think we'll win, but I won't be surprised or disappointed by a loss. We're opening on the road, in hostile territory. That said, LaPolice's offense has not impressed in two preseason games and Willy hasn't looked comfortable at all. Don't forget, when our starters went head to head with WPG's starters in preseason game #1, we ran up a 13-3 lead despite only dressing 3 players in our starting D. And with Keeping out 8 weeks, I expect Cash, Martin, Knapton, and Bowman to present the Bombers with all kinds of trouble in protection.

Here`s a pretty decent analysis of the Bombers:

In order for us to win we will have to put up 30 points, which has always been Popp`s target, because Wpg. will get their share of points.

Again, I don't know that Winnipeg is necessarily going to put up a ton of points. Sure, they could tear us up, but we could also rip their O-line to shreds and sack Willy a bunch on the strength of our front seven. Even that Sun article admits that WPG's O-line is suspect in both pass protection and run-blocking.

I do think that Montreal will win. I just hope that our DB's won't get too many pass interferences; Drew Willy always goes long balls,in order for the other team to get a penalty.

I do think that Montreal will win. I just hope that our DB's won't get too many pass interferences; Drew Willy always goes long balls,in order for the other team to get a penalty.

True, but he has to have the time in the pocket to get those long balls off. It'll be hard for him to throw the deep ball flat on his back after being sacked. :twisted:

If they make him stand in the pocket to throw deep balls all game long, he'll be injured soon enough.

Flightdeck podcast (likely Tim Capper) says the Als will use white helmets on the road this year.

Ruby will be well tested by Westerman. Nik Lewis needs to help out with some chip blocks to keep Westerman honest.

Darrin Bauming
?@DarrinBauming
Andrew Harris appears to have tweaked his hamstring during 12-on-12 teams drills this afternoon. #Bombers 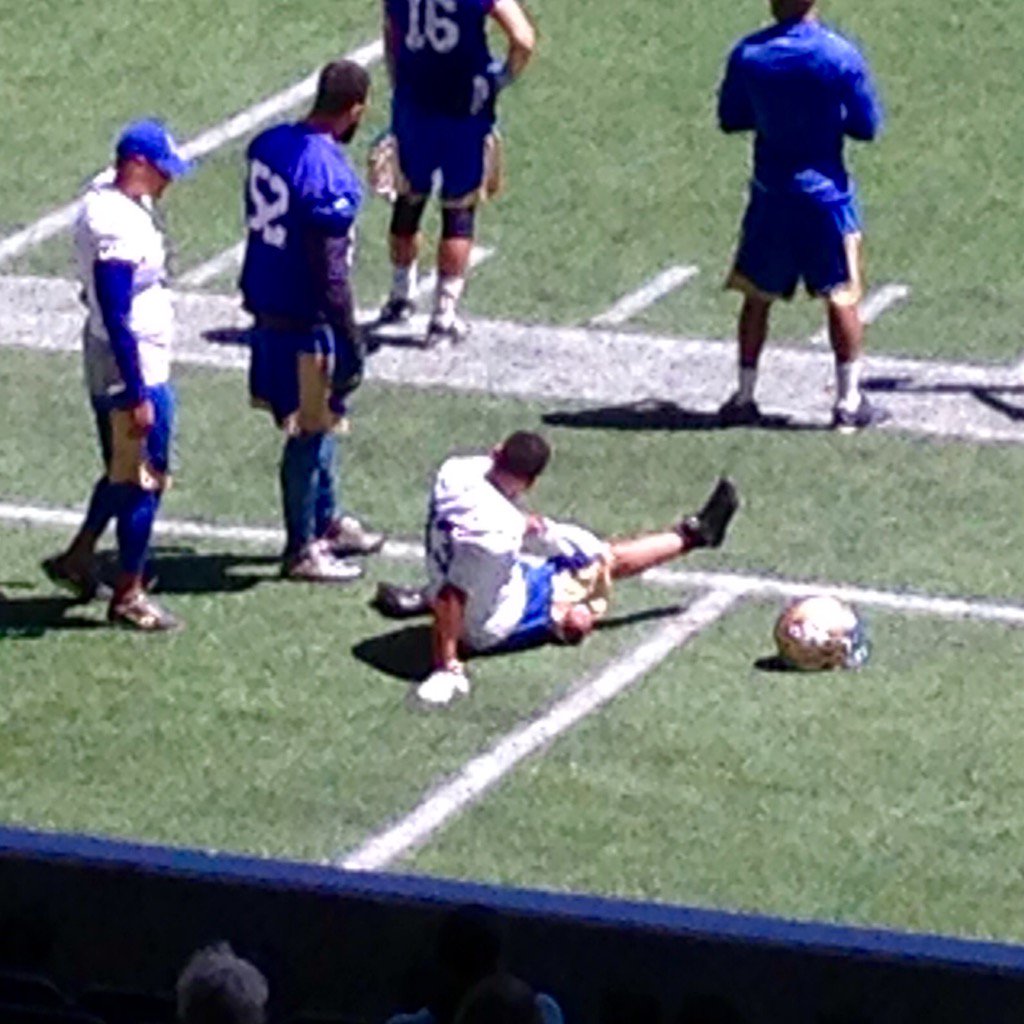 Its not going to change game planning, youre still going to have a RB. You`d probably have to use an International Flanders, but he gave us all kind of trouble in the pre-season game.

You game-plan by stopping the run. And we're generally pretty good on run D. I'm not particularly worried.

Its not going to change game planning, youre still going to have a RB. You`d probably have to use an International Flanders, but he gave us all kind of trouble in the pre-season game.

.....Certainly we're going to have a running back BUT which one...>>>The fleet footed one, Flanders, orrr the blocking Mr. Everything back, Harris...Definitely if I'm game planning that has to be taken into consideration...Maybe a minute detail to some....maybe not.

You`d probably have to use an International Flanders, but he gave us all kind of trouble in the pre-season game.

In that preseason game, we left 9 of 12 defensive starters at home and had a 13-3 lead on the Bombers with our starters in. I think we'll be fine. The pursuit speed and gap control of our linebackers is as good as any group in the league.

Not concerned with stopping the Bombers ground game, just saying they dont lose much if Flanders replaces Harris, although Willys ribs might disagree.

My main concern with Harris is the screen pass. And if you limit him on the ground early he tends to get frustrated.

You game-plan by stopping the run. And we're generally pretty good on run D. I'm not particularly worried.

I am more worried about the offense and generating points on the board.
Playing against the Argos second team D last Friday night and managing little offense in the first quarter.

As we know, the 2 question marks this season will be the O-line and the secondary.

I feel better about the secondary if only because I really feel our improved D-line will help minimize how long they'll need to hold their man in coverage. Not having to blitz in order to get pressure on the QB should free Thorpe to be even more creative with schemes and defensive switches to confuse opposing QBs. Just don't push it with the likes of Cox in coverage, he's no spring-chicken anymore.. gets beat pretty easily 1-on-1.

More turnovers, leading to more points off turnovers, would help the Als reach that 30pts/game threshold they are aiming for. More/quicker defensive stops, combined with our 2015-improved special teams, would translate in winning the field position game.. even a less-than-mighty offense will end up reaping the rewards.

Similarly the O-line will need help as well, I'm hopeful but less certain than about the D that this will take place.

The O-line would benefit from leaning more on the run, and favoring quick throws. In theory with a Sutton in mid-season form and Calvillo who lived off of quick-release play-calling in his playing days.. the ingredients are there for the Als offense to use that kind of offensive game plan.
But at the same time, Calvillo was used to pass-heavy playcalling behind a stacked O-line.. and our star-studded receiving corps will clamor to see a lot of balls come their way, so I'm not 100% convinced we'll lean as much on the run as I'd like us to.

In the secondary I take the fact that some rookies pushed some vets out as a positive sign we're in better shape than we thought, while the rookies taking over on the O-line didn't beat anyone out.. we're turning to them because we lost Burke to free-agency and LBJ is injured, they're getting the job by default so that's less comforting.

To finish on a positive note, the almost-discarded Cato has looked really good in camp and seemingly has won the #2 spot, easily. QB is the most important position, having a well-performing Cato as a safety blanket is significant given the fact we're starting the year with a learning-on-the-job O-line & an aging injury-prone #1 QB.

Can't wait for the season to start, and the "slated for a last place finish" Als to have a good season playing with a chip on their shoulder.

Mike O'Shea's been watching Chip Cox film. Seems like he's trying to figure out where Chip is going to be on the field. With the addittion of Vaughn Martin, it will be really hard to figure out how Thorpe will use his linebackers