black helmets tonight vs. BC???

Why can't the CFL get their s--t together and make a Stamp uniform that looks like Ohio State??? Silver helmet with a black horse, red jersey, and gray pants with the same stripe design as the Bucks!

When will Ohio state change there crap and look like the stamps.

Don't really care about Ohio State, but agree the road unis look like crap, waaaay too much black now with the black helmets and pants. 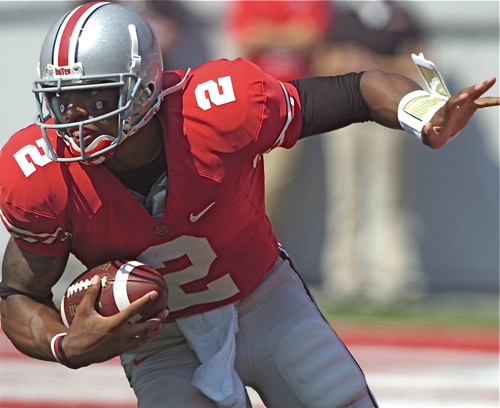 On a nice sunny day, the uniform would look a heck of a lot better...probably worth at least 3 wins alone when the players can feel tough.

Cut Burris and pickup Terrelle Pryor and the Grey Cup comes back to Calgary.

NO! The home unis look good as they are, it's just the road unis that suck. Don't want to go to silver helmets and pants.
Just keep the red helmet for both home and away.

I like the black. I don't like the white pants ever. Red at home black on the road works for me. Silver? No thanx. a rookie cfl qb with no pro experience would have zero chance at winning a grey cup. I'm good with burris thanx.

Are we all against change???

Try it for a weekend...and then decide whether to continue. Calgary could be the silver bullet attack.

the lions used silver helemets back in the early 90's. no thanx.

the lions used silver helemets back in the early 90's. no thanx.

I remember that and it was an improvement especially with a little purple added in the uniform too! I prefer the white and orange at the beginning of the season, and desire the silver, orange and purple when the temperature starts to drop.

Back to a discussion about Stamps football....

What have you been smoking?

Silver, purple and orange were the colours of the Shreveport Pirates, never the BC Lions (BC were black and orange when they had the silver helmets and pants). BTW, the pirates looked ugly like most of the US expansion teams.

Anyway, I really hate the fact that there's too much black being used in the road uni's. Red is the team's primary colour and should be the dominant colour. Next year the unis accross the league are supposed to be changed again and I hope that the Stamps come up with better looking unis and not try to incorperate more black into the design (the team colours are red and white, not red and black or black and white).

Silver, purple and orange were the colours of the Shreveport Pirates, ....

I think you're right about that Shreveport thing.

Add a light touch of purple and silver to the BC uniform anyway. That would be cool. Clemson did that with their school colors too. It was a definite improvement.