Best Lion of All Time

I vote for clarence

Swervin Mervyn Fernandez has to be one of the greatest nicknames of all time.

Here are a couple of pics I found to honor Swervin' Mervyn Fernandez. Hope you and all Lions fans enjoy! Take care! Myles 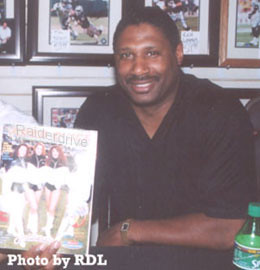 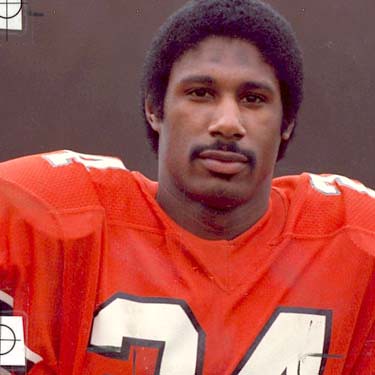 Bill Munsey. Linebacker that was press into playing fullback in the same game once. Scored 2 touchdowns, one on offence, one on defence. !964 Grey Cup

Wow! That was awfully impressive.... :o

Tom Brown was the best (and most feared) defensive player ever in Lions' history. (by a wide margain).

Tom Hinton was the best Lineman in Lions history as per the opinion of the late Bob Ackles.

Sorry PastaSteve, gotta take exception with Ian Smart being best kick returner. The best and most exciting returner I can remember (as a fan who started watching in the mid 60's) was Darnell Clash.

He came within one game of setting the club record for return yardage in a season and in the final game that year (I think it was against Toronto, but could be wrong) they simply would not kick the ball to him.

He was explosive and was not around for as many years as Gizmo, or Pinball, otherwise he would be as well remembered and celebrated.

Anyone out there know who holds the record for most return yards in a season (and how many) for the Lions? How about the same question for the CFL as a whole?

Was that James "Quick" Parker?

I will take Glen Jackson on defense and John Henry White on offense. Not spectacular per say, but very reliable and got er 'done. I also really liked GJ's demenor and attitude, he came to play and punish game in, game out.
Al Wilson was also a fan favourite, very personable.

Ray Nettles was being interrviewed about what the Lions could do to save their hides in the next game during another tough season and responded with "I'm gonna be there" - it said it all. I'm still there.

Ray Nettles was being interrviewed about what the Lions could do to save their hides in the next game during another tough season and responded with "I'm gonna be there" - it said it all. I'm still there.

Oh really??? Hmmm...I wonder who did the interview? It would have to be St. Peter. I believe Ray Nettles passed away in September 2009.

Unless of course you're talking about some season gone by many years ago when he was playing.

yeah - I am referring to a promo interview back in the day. I was never impressed with Vic Rapp trading Ray Nettles. Kinda like Marc Crawford not letting Gretzky shoot in the Olympic shootout for Canada - What were they thinking?
But it doesn’t mean he was THE best Lion of all time. He had a certain spirit that came through in that simple statement that struck a cord in me for all time.

Best all time? Tough to pick one. Before I pick my favourite, here are my top five, one for each decade since the 1960s.

In the sixties, Willy Fleming was the best Lion and arguably the best player in the entire league. In 1963 he had a 9.8 yard average every time he touched the ball; nothing else needs to be said. Honourable mentions to Joe Kapp, Bob Brown and Norm Fieldgate.

In the seventies Ray Nettles was a beast at middle linebacker. Joe Forqueen and Rocky Long were big hitters in the secondary during an era when there weren't too many outstanding players on the offensive side of the ball. Except for Joe Pap Pao, and Jim Young. Those two guys gave us a chance to win almost every game. I give the nod to Jim Young for his tenacity and durability.

There are probably at least ten candidates for best Lion from the great 1980s teams. Merv Fernandez and James Quick Parker were probably the outstanding, but neither had long, distinguished careers like Al Wilson, Larry Key or Roy Dewalt. On defence you could pick Ty Cruz, Larry Crawford, Glen Jackson, Rick Klassen or Andre Francis. Francis was the best wide side corner I've ever seen in this league. But in my opinion the best player we had in that decade was Lui Passaglia. Game in and game out, healthy or injured, he was effective, leading the league year after year in points scored. And unlike most kickers he had the ability to throw or run the ball from special teams formations (he was a QB at Simon Fraser, remember?)and because of that he kept many drives going that led to points.

In the nineties Ray Alexander, Cory Philpot, Danny McManus, Doug and Darren Flutie were stars on offence. Jamie Tarras was a star on the offensive line, first at guard, then at tackle. While he was here Matt Dunnigan was also excellent, as was Damon Allen and the double threats at running back-Robert Drummond and Sean Millington. And don't forget the impact Passaglia had in that decade as well, kicking the winning field goal in two Grey Cups, 1994 and 2000. After much consideration, I give the nod to Doug Flutie, with Lui a close second.

In the first decade of the 21st century we saw the transition from one great veteran QB, Damon Allen, to another fine field general in Dave Dickenson. Antonio Warren was a solid tailback and a consistent kick returner. Paul McCallum has been remarkably durable and efficient, doing all three kicking jobs. Cameron Wake, though only a Lion for two seasons, will be remembered for decades for his ferocious pass rush and good positional play. Stars like Murphy and Jiminez became the most feared tackles in the league. And Angus Reid has been there for this whole decade, controlling the "A gaps." Plenty of stars on defence like Mark Washington, Baron Miles, Ty "'Big T" Williams, Carl Kidd and Barron Simpson. Paul McCallum has been excellent. Bu in my opinion the best lion of the decade was Geroy Simon. Nobody has lit up the league more in this decade.

Forced to pick one, I choose Lui Passaglia. How can you argue with a guy who played pro football as well as he did, for twenty seasons?