Another tough game/test coming. BC has a big defensive line and will apply much pressure on the Als. Offensively no area of concern for BC. QB Jenning is an adept/fan of the long ball and can throw for a long TD any time.

I wonder if Mincy is OK to go. Same for Raymon Taylor. The Als need these DB's against BC. Is Samuel Giguère ready to play? Another one that is highly needed.

As okie wrote -Montreal at Edmonton- many receivers-5- on practice roster. Sign that the coaches are not satisfied with receivers on current roster? Could be.

I hope for the best to the Als on Thursday night, but unfortunately I expect that they will be 1-2 after the game. Hope that they will prove me wrong.

A nice week to all.

-Didier Orméjuste says Jonathon Mincy has been ruled out of Thursday's game. Herb Zurkowsky posted that Donald Unamba was at boundary corner during practice today. Ryan Phillips was the other corner.

-Announcement that was scheduled for last Monday concerning the Alouettes and Parc olympique was made earlier today. Beyond just practicing there, the Als will also get a new training room. Team pledged to play at least 1 game a year at Olympic Stadium for the length of the agreement.

Hoping that the Als can make it a close game. Chaps will have to come up with a stronger performance for his offense. 166 yards passing not good enough. Jackson non existant, not good enough.
And Mincy out. Going to be even tougher for the D.

Presently, from what we know, 3 of the 4 Int. DB's starters won't play/are injured. They are: Greg Henderson, Jonathan Mincy and Raymon Taylor. BC QB and his receivers may have fun next Thursday night.

According to Didier Ormejuste of RDS, Nat. WR George Johnson will replace Alex Pierzchalski as a starter; Alex is replaced because of his bad performances.

Jacques Chapdelaine said that Ernest Jackson had mental mistakes in the game; twice he ran bad routes. Jacques said that they can’t throw to him if he does not run the good routes. Ernest said that he will be working to correct this week.

I do hope that Chapdelaine will forcefully tell Ernest Jackson that he must learn his running routes and, display them in the coming game. Penalties really hurt, especially the one called on the Lark's Mark P to nullify the team's best drive of the game. As he slowly, with not a care in the world, slowly walked off the field,to hear the referee's call for the Als having too many men on the field,he did quicken his last step, but to late. I haven't seen a 13th player on the field call since our first Grey Cup winner against the Riders. Maybe the team will use another import. I just found out another international WR is to be added to the team. Ryan McManus was All-Ivy league from Dartmouth U in 2015. His skills can be seen on you tube which, demonstrates them. He was a free agent for Boston, in the NFL last season, didn't make the team but, he did help Tom Brady prepare for a title game. He's on the small side, 5'10, for the NFL but, we've had success with these players.

Since Luc Brodeur-Jourdain says the Als 1st or 2nd in the league in some categories,

here is what categories the Als are doing well in and what needs improvment and a few other tidbits from the latest league stats.

-Defense being last in plays per game is not a good sign considering BC is first in time of possession.

-Only defensive category in which BC is ranked low is in 30+ yard plays allowed as they are ranked 8th. However, the Als are tied for fewest 30+ yard plays on offense.

-On special teams, the Als are ranked last in punt return average with only 5.4 yards per return.

-Being 4th in yards per kickoff would be considered a mild disappointment as Boris Bede is usually 1st in that category.

-However, the Als are the bottom in QB rating for passes between 0-8 yards with only a 74.

-Als and Lions actually have the same number of “big plays” so far this year. Both are only ahead of Hamilton who played only 1 game so far.

Missed the game on Friday, was Jackson still lined up at WR? One would think you'd want him at slotback to see the ball as much as possible...

Jacob Ruby released amongst today`s transactions. Could we not try to develop a guy like that? Will be interesting to see if he is picked up by someone.

Player added to the roster:
Antonio Pipkins (I), QB, Tiffin

-On special teams, the Als are ranked last in punt return average with only 5.4 yards per return.

Wouldn't be surprised if Logan ends up being released, Graham or Reaves could do the job for less money and would also be better weapons on offense.

As Sheldon noted, Deandre Reaves was released. Beisides returns, Stefan Logan's other duty is backup running back. Als would need to find another back from somewhere if Logan is replaced.

When the Als used a 6th lineman, their choice was Matt Vonk making it obvious they chose him over Jacob Ruby. Still surprised the team would just not hold onto him even it it was for insurance purposes only.

Joey Alfieri says the team is very high on Antonio Pipkin whose number is apparently 16. Pipkin played in the 2017 Senior Bowl. His stats in that game was 2 of 4 for 17 yards and 2 interceptions. What is more interesting to me is that a couple months ago, an independent scout made a public post looking for quarterbacks for potential CFL employment. One recommendation was Antonio Pipkin. Coincidence??? Who knows.

With 6 quarterbacks on the roster, I am now curious to see whether Drew WIlly will be listed on the depth chart for Thursday's game. Could he be the #3 QB?

Updated roster still has Drew Willy on the 1-game injured list, so I guess he will not play on Thursday. Anthony Sarao was moved from the 1-game to the Practice Roster

Int QB Anthony Pipkin and Int. WR Ryan McManus are not listed on the updated roster,at least not yet. 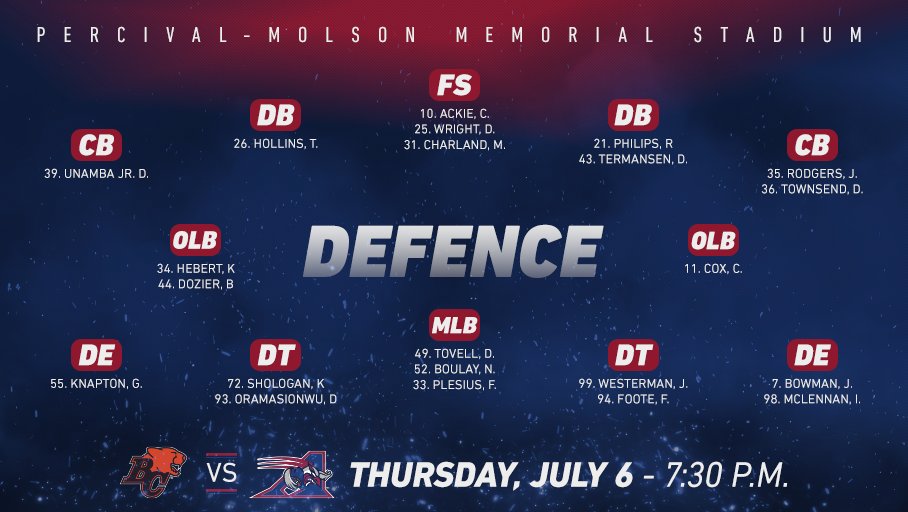 That`s pretty good, he completed all his passes.

As per CFL transactions, Int. QB Antonio Pipkin was transferred to 1 game injured list. Now 3 Int. QB's on that list.

I am not looking forward to tomorrow's game. I dont think our unexperienced backs will be able to contain Jennings and the long plays. I might eat my words but i will have a 12 pack with me in case. Yes i am on vacation

Durant could wake up in this one /