Rumours are heating up about Toronto possibly landing Popp, Trestman and Manziel and the Cats willing to deal Manziels rights.
That being said I thought of an interesting potential trade and wanted to see if anybody else wants to make up a mock trade for Manziels rights!

Love to see Ricky Foley in gold and black, if just for the post and pre-game interviews!

Popp gave up a 1st to BC for the rights to Vernon Adams last year, So a player like 24 yr old Manziel should be worth a bundle!

A big name in the big smoke is the only thing that will sell tickets in TOR.

Toronto needs to make a splash, not to mention they have a reputation for it. Realistically I think even Winnipeg, SSK and maybe on the lower end Montreal and Ottawa would be buyers

Secondly, I wouldn't want either Matt Black or Rickey Foley.

I just scanned the Argo roster online, and there is not one player on their team who I think would improve the Ticats in a trade...hence, me asking for a draft pick only.

I have a hard time seeing the Argos giving up a lot for a neg-list guy. If the Ticats don't offer him a contract, Manziel's agent can insist that he be removed from the neg list. In either case, the idea that he'd be worth a first, a second and two veteran NATs is over-reaching by a lot.

Secondly, I wouldn't want either Matt Black or Rickey Foley.

I just scanned the Argo roster online, and there is not one player on their team who I think would improve the Ticats in a trade...hence, me asking for a draft pick only.

Here is the slim pickins 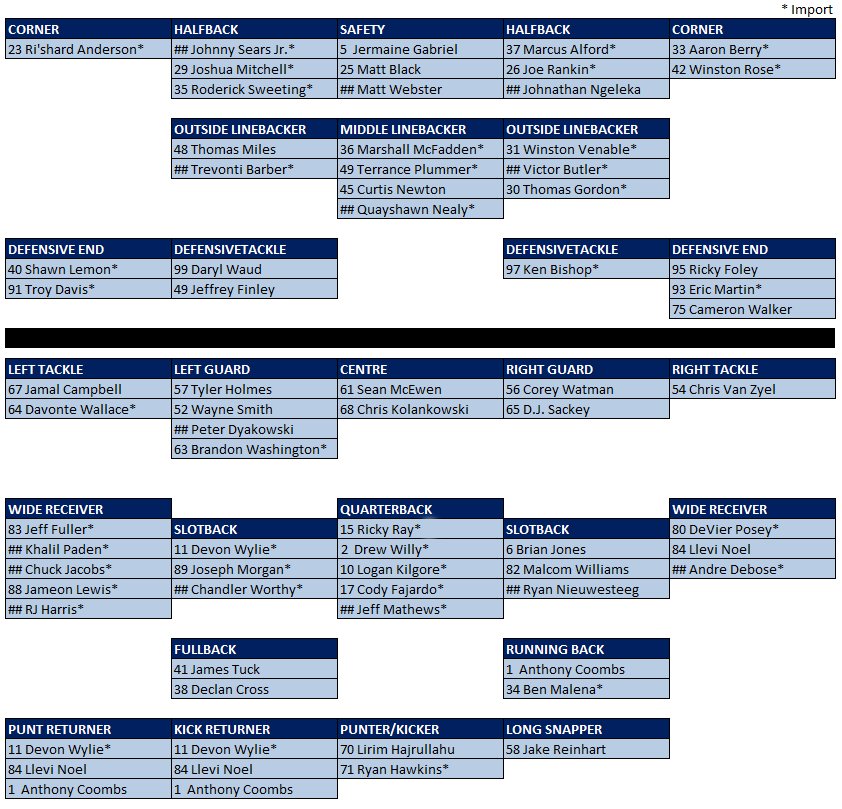 picks if anything. there is no one worth taking from the argos player wise and definately not trading adrian tracy for Foley who is possibly a year or two away from retirement. tracy ' s gonna have a great year in 2017

Good Gawd , that is one SAD looking roster . I have to agree there is absolutely "NOTHING" or "NOBODY" on that roster that I would ask for in a trade . Tell ya what , if they wanted Manziel that bad and were willing to trade I would take a few used practice balls , a couple rolls of tape and a kicking tee over any of the sorry scrubs on that Boat Anchor team.

Rickey Foley???.....lol....that guy was washed up 3 years ago!!! If you want to bring Foley in, you may as well bring back Adriano Belli too.

The most interesting Arg...., for the TiCats maybe among the guys they've just picked up in free agency -- Venable, Fuller, Webster ... depending on what their big city contracts call for.

Rickey Foley???.....lol....that guy was washed up 3 years ago!!! If you want to bring Foley in, you may as well bring back Adriano Belli too.

Waud biggest accomplishment so far in the CFL has been to break C.J. Gable's arm on a cheap shot play. Waud is not worth trading for. He is basically invisible out there.

Remember, Manziel's rights are worth more than you think because the Argos are under pressure to generate buzz around their team, and sell some tickets right now. That's why I think they would be willing to trade real value for Manziel's rights, and why the that trade will probably happen before, or the day of, the draft.

As said above, the value for this kid would be easily much more than nost other neg list players. One of the best and most popular players to come out of the NCAA in a while, young, 1st round NFL talent, Torontos ticket sales would double overnight and the viewership on televised games would be phenomenal not to mention the awareness it will generate in the US. I dont like Manziel but hes a golden goose

How about Brian Jones , Receiver , 2016 First Round draft pick from Acadia and Argos 2018 First Round pick ?

Its true, even in the NFL Manziel makes headlines, from his draft year on. Hes sort of got that Tebow following, where they havent really done anything but are still insanely popular. Toronto is an NFL town so if one of the biggest free agent names in the NFL comes to town, in a city of almost 3 million, you dont think its possible to double ticket sales?

How about Brian Jones , Receiver , 2016 First Round draft pick from Acadia and Argos 2018 First Round pick ?

Didn't they make this same prediction when the argos moved to BMO field....and look how that turned out.

Foley for Adrian Tracy....OMG...besides the age difference....Foley just talks a good game...Tracy plays a great one!!!!!