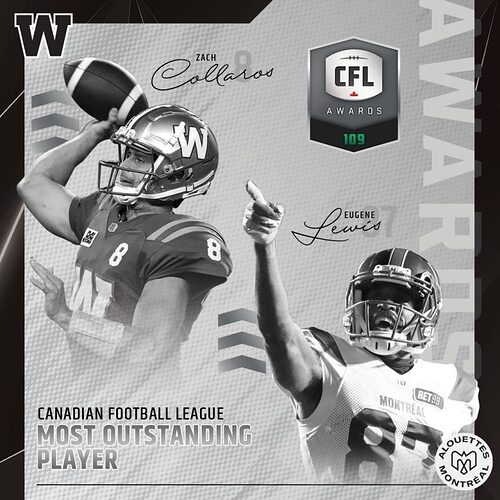 Zach Collaros led the league with 37 touchdown passes – a dozen more than the next player – as Winnipeg averaged nearly 30 points per game. The former Cincinnati Bearcat notched his first 4,000-yard season, while completing nearly 70 per cent of his passes. This is Collaros’s second career Most Outstanding Player nomination, and he is looking to become the fifth player to win the award in consecutive seasons.

Eugene Lewis established new highs in receptions (91), receiving yards (1,303) and touchdown catches (10). The Oklahoma alumnus recorded an East-leading 22 catches for 20+ yards, while notching 30 second down conversion receptions. He topped the 100-yard mark on five occasions. For the second straight season, an Alouette is the East’s finalist for Most Outstanding Player, following in William Stanback’s footsteps.

Edit: Added a poll to the first post of the thread.

Who's the East nominee this year?

The person responsible for instituting the present playoff format.

No need to ask…took eight days for you to think of a reply. And it wasn’t much of one

Obviously my biased vote would be for Lewis, but it has to be Collaros, hands down.