Getting it started as training camp is a go .

Jennings already arrived and has been throwing at TD Place this past week .

Looks like the CBA is done and players are reporting for medicals .

Have you been down watching TC yourself, Hank?

Have you been down watching TC yourself, Hank?

We need some warm weather here . Coldest spring in 50 years .

Were you going to check it out ?

Not sure if I will or not, but might hit the Glebe for lunch one afternoon and wander by to check things out. 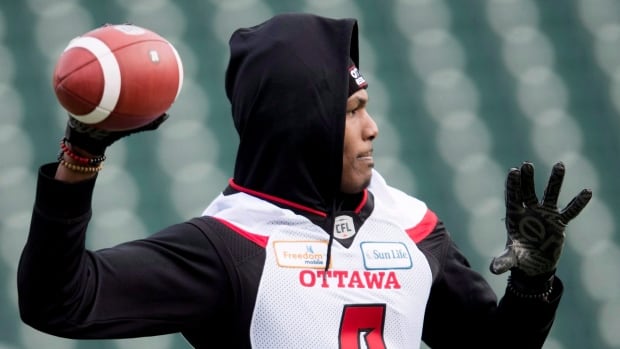 Dominique Davis will be Ottawa’s starting QB in 2019

Interesting timing on the announcement . . . with Jennings as backup, I wonder how long Campbell will stick with Davis should the offense struggle.

Nice win by Redblacks tonight . The coaches need to be better .

Davis needs to tune in better with his throws inside but Kinda agree with Suitor which I don’t usually with him saying the play calling needs to be better . Way too many interceptions and close calls .

Suitor upset at Langford for not giving up the point ended up being a good move as the Stamps had to go for the TD and not a field goal . Dice looked upset at him too .

Langford actually made the right move . It was up to the offence to move the ball if they were going to win and they would have been down 7 late instead 6 and they got a FG then a TD for 4 point win .

You have to play the odds and use the point count to your advantage .

Totally agree with you on the not giving up the point!! It was the difference in winning or losing that game.

That being said, Davis does need to learn a lot faster now that he has been given the no.1 job
that he has to more patient like he did in the final drive with the pass to Sinopoli.

As for the rest of the team …… props to BOTH lines. Our offensive line made plenty of holes for Madu and time for Davis while on defence, they had 3 sacks and a bunch of rushed passes for a very solid start to the 2019 season. Receivers were good overall, other than Rhymes :

and we cant forget our go to kickers, Ward 3 for 3 and Leonne was averaging 56+ yards

Oddly, Ottawa has two wins in three games, even while the team has performed unevenly, just as might have been the overriding expectation coming into this season. Dom Davis has looked better than expected at times, and at others, has demonstrated why fans are so concerned about the REDBLACKS’ quarterbacking situation.

The running game, which dominated Calgary, has vanished, and begins to require a question of when pre-season phenomenon John “The Rocket” Crockett will get his chance to carry the mail.

And yet, two wins and a loss. A good start, by any measure.

Heard today Davis will start again, Crocket will get more touches and might even start at RB and Dedmon is close to coming back

Just mix it up more than run, run, punt and the job is yours!!!

Just mix it up more than run, run, punt and the job is yours!!!

The coaching has been bad and game management has taken a big step backwards .

Just saw that Bridge was released.

last time Ottawa had a Canadian quarterback, he did alright as a starter

Article in the Ottawa Sun speculating that it was more than just money that moved Harris on .

The article points at locker room and off the field comments that may have irked the lack of trying to get him signed . Pruneau kind of suggests it .

Still doesn’t help with the losses of personnel like Powell who was a bright shining star . The only thing I can think of was injuries for him that may have hindered his signing . Miss him on the field this year as a redblack .

Just saw that Bridge was released.

last time Ottawa had a Canadian quarterback, he did alright as a starter

I think Bridge would be a good signing .

Coming from Hamilton to visit Ottawa and then go to the game on Saturday Aug 17th.
Anyone selling any tickets behind the visitors bench? Looking for two. Also Is there a tailgate outside the stadium? Thanks

Coming from Hamilton to visit Ottawa and then go to the game on Saturday Aug 17th.
Anyone selling any tickets behind the visitors bench? Looking for two. Also Is there a tailgate outside the stadium? Thanks

There is a party zone outside and inside the stadium .

No actual tailgating with parking and barbecues around the stadium as it’s a very commercial area with underground parking .

There is an “unofficial” tailgate with BBQs at Brewers Park which is usually a few hours before the game. 8)