Puck drops tonight on 4 fronts including the Blues raising the banner vs. the Caps and the Leafs hosting the Sens for another battle of Ontario.

John Tavares named captain prior to tonight. The only logical choice IMO.

Do the Leafs make it further this year? Do the Blues repeat? Can the Lightning come back from their epic choke?

Well great start for my Golden Knights and great slate up for the next three nights!

I have a question here for Canada that picks up for one answered during the playoffs. Please note I have not been an NHL fan that long and have been a CFL fan for longer.

Other than the Golden Knights whom I have followed from before they were named, I won’t cheer for most other teams.

I have learned that many Canadians do that for remaining Canadian-based teams left in the playoffs.

So during the season, do Canadian fans of teams outside of the GTA cheer for other teams including those Leafs? I get it for those of you in Ontario, and I imagine most in Quebec the Habs, but what about other Canadians?

Down here no way I would cheer for the likes of the Rangers, Bruins, Sharks, Kings, Islanders, Panthers, Hurricanes, Capitals, etc of course.

I like the Jets though also since before launch because that was the right place for a team not Atlanta and a few other wastes of markets down here like it.

As far as Canadians cheering on other Canadian based teams, I think outside of the closest rivals (Leafs, Have, Sens triangle), people will gravitate to the other teams in the country.

Not having a Canadian based team winning the cup since 1993 will do that. I think once that drought ends, perhaps which side of the border it’s won will matter less. If Vancouver still had an NBA team, I doubt many in Western Canada would join the Jurassic Park bandwagon this year.

Marner nets 2 in the Leafs 4-1 win in Columbus. Ceci gets his first as well.

Winnipeg gets their first win via shootout in New Jersey. Scoring 4 unanswered to force the extra frame. Jets contests are going to start looking like Lacrosse games with their firepower and swiss cheese defense this year.

Habs/Leafs game was pretty interesting, especially when Kapanen threw his broken stick… that was the TSN (Toronto’s Sports Network) turning point. Its always fun to watch the Leafs lose, and my team, Montreal, wins!

I just wish that the networks would stop all the Leaf coverage… I got tired of hearing the about Marner’s contract… he wasn’t the only RFA… but it seemed like it. Also who was going to wear the “C” was covered ad nauseum… about the only thing they really didn’t focus on was Matthews dropping his pants in Arizona… any other player and they would have been suspended, imagine if it had been Kassian who did that? One set of rules for Toronto, and a different set for rest of the NHL…

I don’t really care what country the team is based in… I live in Winnipeg, but I am a Carolina Hurricanes fan (long story). If all the teams I like are out, I won’t cheer for a team because they’re close… those teams would be my rivals. For me, it would be like if Saskatchewan made the Grey Cup… I wouldn’t cheer for them because they’re a 6 hour drive away, I’d cheer against them.

Leafs hammered 7-3 at home to the Lightning in Brandon Point’s first game.

Time to break up the Oilers! They 4-0 to start the season after a shootout win in New Jersey.

Sens lose 6-4 at home to St. Louis. Only 9,204 on hand for the second home game of the season. Rumours are picking up again that Melnyk is finally looking to sell. Bill Daly’s response is the league is happy with Mr. Melnyk’s ownership. That’s not a denial. With Eugene’s debts and many lawsuits on top of people with deeper pockets wanting to buy the team, how much longer can this circus keep up?

Leafs shake off some rust with a 4-1 win over the Sharks.

Patrick Marleau made his return playing in his 1500th game for San Jose and 1663rd overall. 103 back of Gordie Howe’s Mark though Mr. Hockey still has his WHA totals on top of that.

Off to Montreal tomorrow.

Another loss for the Leafs. Is Babcock’s job safe? The natives are getting restless.
-https://torontosun.com/sports/hockey/nhl/toronto-maple-leafs/simmons-across-the-board-coaching-players-management-leafs-should-be-embarrassed-by-early-season-play

And OV was critical of the Leafa before his 4 point night tonight.

Maple Leafs have to ‘play differently’ if they want to win Cup: Ovechkin

I think for them, they are still a young group of guys and I hope they’re going to learn. It’s up to them how they want to do it and if they want to play for yourself, or if they want to win a Stanley Cup they have to play differently

I wish that during the season the NHL would do the standings on percentage basis as done by MLB and NFL.

Is another NHL team coming to Toronto? First cardinal rule in getting a pro sports franchise. DON’T go public. Talk to the commissioner and take his advice. 25,000 seats 😂 https://t.co/t7u9IsuA8t
Mightygoose February 10, 2020, 7:08am #12

These jokers were in the news a decade ago and considering the league moved one team and expanded into more new markers since seems to suggest they have made…no traction.

Agreed with Peddie going public before talking to the league never mind the city doesn’t seems to be the best tactic.

On to the actual team in the market, Andres Johnsson scores during an 11 round marathon shootout win over the Flyers. 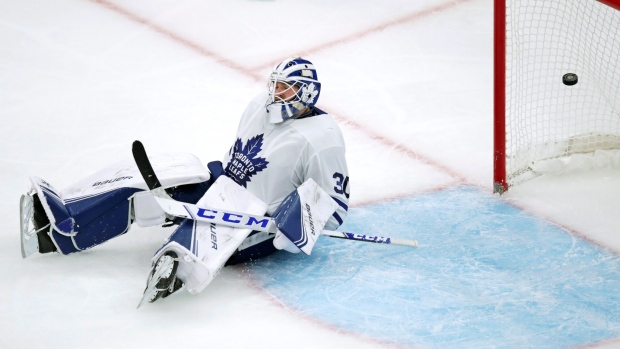 The Maple Leafs placed goaltender Michael Hutchinson on waivers Monday afternoon, one day after his winless season continued in a 5-4 loss to the Chicago Blackhawks. Hutchinson is 0-4-1 on the season for Toronto, with 4.44 goals-against average and...

Though we was hung out there in Sunday’s loss in Chicago, he has not answered the call remaining winless. Will likely call up Kaskiuso from the Marlies.

Are the Oilers for real this year? Still early but they lead the Pacific. McDavid with a Hat trick in their 6-2 win in Anaheim.

Unfortunately, what’s getting the headlines is Don Cherry’s ‘you people…’ comment during coaches corner on Saturday.

Apologies from Ron McLeanand Sportsnet along with astatement fromNHL distancing themselves. How long until Don himself comes forward. Next coaches corner will beinteresting to watch.

Don Cherry is no longer with Rogers/HNIC

John Shannon is pretty reliable on these things

John Shannon is pretty reliable on these things

At age 85, it sounds like he said this on air because he wanted to go out as perhaps he wished.

At age 85, it sounds like he said this on air because he wanted to go out as perhaps he wished.

If TSN hires him just as a gesture for the rest of the year .

I keep my TSN subscription .

I only watched Coaches Corner for years now… There is just too much hockey… There is never too much Cherry.

Just like the Nazis and the commies, in order for your regime to further itself you have to wipe out history and those who know it. Lefties are behind this and ‘YOU PEOPLE’ know who you are.

I only watched Coaches Corner for years now… There is just too much hockey… There is never too much Cherry.

Just like the Nazis and the commies, in order for your regime to further itself you have to wipe out history and those who know it. Lefties are behind this and ‘YOU PEOPLE’ know who you are.

Fired him on the day to Remember November 11th was low .

He always was proud of today and yesterdays sacrifice .

If TSN hires him just as a gesture for the rest of the year .

I keep my TSN subscription .

Apparently CBSC’s inbox was so overloaded with complaints, they had to close it

So many people complained to the Canadian Broadcasting Standards Council about Cherry, that it exceeded ‘the CBSC’s technical processing capacities’

Yeah, I don’t see any way Bell or any firm in this country touching this with a 10 foot pole.

At 85 assuming he’s managed his money well, it’s best to ride into the sunset and call it a career and a solid career it was despite how it ended.

Edit: I think the firing was done today because it was the first business day to do so, just happened to be Remembrance Day

Okay, I’m in the process of painting a target on my back for the politically correct folks and a few moralists, but I sincerely feel that Cherry is perfectly entitled to his comments.

What exactly was the offence? Was he incorrect to say those people who he named do not wear poppies. That is, did he say they don’t but they actually do? If so, a simple apology should suffice.

If he was correct, and they are not wearing poppies through lack of knowledge, Cherry providing a comment on a common ‘Canadian’ cultural practice might help all of us to better understand one another, and thereby better assimilate. How else do we learn?

In Cherry’s comments, I understood him to say that wearing a poppy for remembrance is one of the many small things that make up our ‘Canadian’ way of life. I happen to agree.

Sure, he’s a blowhard and a buffoon. That’s what he is, that’s what he does, pretty every week. But, he is still entitled to his opinion. And, to be fair, so are his employers. However, if it was me, and my decision, I would not have fired him. Rogers and Sportsnet could easily have issued a statement saying Cherry’s views are his, and are not shared by them. Funny they never seemed to complain when he glorified violence and fighting as part of the game, but they do a knee jerk over his editorial comments about people not wearing poppies?