The Ticats season may be over, but there is a team in this town that is a contender to win a national championship. And that team consists of some future CFLers, and perhaps some future Ticats. Their opponents also have some future CFLers, and possibly some future Ticats. After what was a disappointing season for Ticat fans, there are many football fans in Hamilton who would like to at least see the McMaster Marauders succeed, and win this Mitchell Bowl game today and be playing in the Vanier Cup game again. And if you want to post about the game as it's happening, this is the place to do so. You can think of this thread as being like a virtual living room where fans discuss the game with each other. You can think of it as being like a virtual broadcast booth where what happens in the game is mentioned and commented on while it's happening. You can also think of it as being like Twitter but without the character limit. In any case, here we go.

WHAT – The 2012 Mitchell Bowl. McMaster vs. Calgary. Marauders vs. Dinos.

WHO - The McMaster Marauders and the Calgary Dinos.

WHY – To see which of these teams that appear to have some future CFLers (and quite possibly, some future Ticats) will be playing for the Vanier Cup.

HOW - Radio: CHML (900 kHz AM) broadcasting from Hamilton.

The McMaster Marauders are on a 20 game win streak and are the only undefeated team in the CIS this year so far. But today, they are going up against a team that is definitely better than any team they have taken on since last year's Vanier Cup game. Both teams have many talented players, and players who will be watched closely by CFL scouts. And so this game is expected to be a great one, as these two teams that are among the best in the CIS look to play for the Vanier Cup next week. And so now having said that, I say...

Hamilton Tiger-Cats are sponsoring the CIS. Big Banner on the sideline stating this in Laval for the Uteck Bowl :thup:

In addition, MRX a Bob Young Company is also a sponsor on the sideline !

Really looking forward to this game. How much? Today also happens to be the Cambridge Santa Clause Parade. My gets to take our daughter to see the parade, I get to watch the game... :rockin:

If Mac wins today, I getting a ticket for the Vanier Cup next week. Probably won't be the only one I'm guessing...

Hamilton Tiger-Cats are sponsoring the CIS. Big Banner on the sideline stating this in Laval for the Uteck Bowl :thup:

In addition, MRX a Bob Young Company is also a sponsor on the sideline !

I didn't see much of the Uteck Bowl, but I did see that ad on the sidelines. That was good to see.

So Laval blew out Acadia. Hope to see a rematch of last year's game.

Calgary has three CFL draft picks on their O line, and RB Steven Lumbala will be a player to watch. And they are quite good at other positions as well.

But Mac is the one undefeated team in the CIS, and they are the defending Vanier Cup champions. Hope they'll keep it that way.

Coverage is on TSN now...

Ptaszek is quite the motivational speaker.

Crapigna kicks off, Dinos start by their 30. Too bad they can only get about 6000 fans there to turn up volume...

2 and out as pass dropped. Receiver heard footsteps?

Was good to see Quinlan get get protection then run with it, then DiCroce gain 10-15 yards on handoff. But two incomplete ones after that, and Dinos will start by the 45 after that return and no yards call.

Mac looks really fired up for this game. I was worried after the last two weeks, Mac looked so lack luster in their two wins. I think they see Calgary as real competition...

Mac looks really fired up for this game. I was worried after the last two weeks, Mac looked so lack luster in their two wins. I think they see Calgary as real competition…

That may be true, Calgary is quite a bit better, so…

Nice faked handoff, but Quinlan runs into Fochesato, fumbles, looked like he got it back, but did not.

And it was Gaydosh who recovers. Scouts are watching both Quinlan and Gaydosh today…

Neither team getting that far on offence in game was some thought would be a shootout.

Before the game, in the Mac locker room: 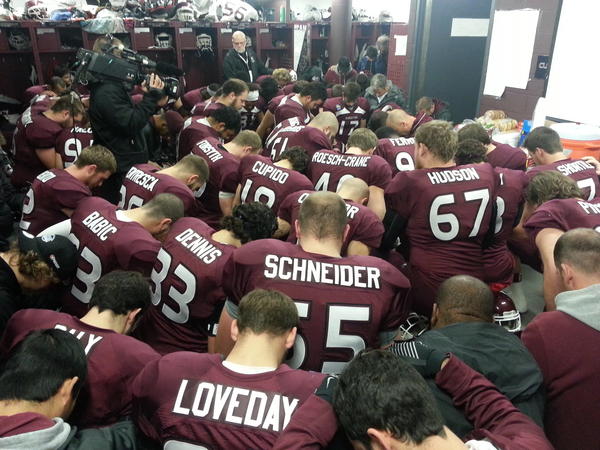 first 1st down for Calgary....their punter has been their best offensive player so far...

Edit: I'm impressed with his punting, not his field goal kicking. If it comes down to kicking a winning field goal, I'll
take Crapigna everytime...

Lumbala not getting far so far, but it's quite early in the game.

Almost on the deep bomb. I love Quinlan's accuracy...

Almost on the deep bomb. I love Quinlan's accuracy...

Looked like Fochesato was going to get that, could not hang on.

Another 15 yard penalty for no yards, Crapigna needs to work on hangtime.

But Dinos go 2 and out, offences still not getting that far.

Going deep pays off that time! Biggest gain so far as Brooks gets it despite the PI call!

Another beautiful toss from Quinlan. The man is a beast!

They use "free play" on 2nd and inches, but incomplete pass.

On 3rd and inches, Dinos take 20 yards in penalties. #44 for Dinos did not look too smart that pushing Quinlan down.

Quinlan pushes his way in on short yardage situation!