20 players in the Grey Cup fined for sock violations

I understand the reason for protecting the CFL sponsors, but the timing of this and the # of players is ridiculous!

Documents obtained by Sportsnet show commissioner Jeffrey Orridge fined more than 20 of the 88 players who suited up in this year’s Grey Cup because of violations related to how they wore their socks in the game.

The fine notice was sent to the players on Dec. 2, five days after this year’s CFL championship

[b][i]The memo, sent and signed off on by Commissioner Orridge, adds this warning: “Please also be advised that any future violations of the Dress Code Policy will result in more substantial fines being assessed against you.?

CFLPA president Jeff Keeping, who has been playing in the CFL since 2005, was floored when he saw that so many of the players in the game were being fined.[/i][/b] 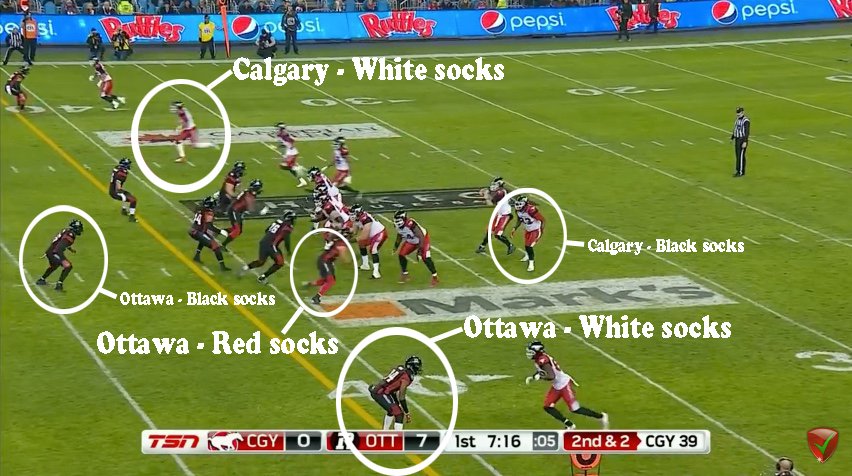 LOL !!! Wow what a scoop , nice investigative reporting going on here. Just two things anyone needs to know about this revelation..........It comes from SportsNet and it was written by the "Trash man" aka Madani , enough said :roll:

Just by the way , hands up anybody who watched the game and noticed any players actually wearing illegal socks or God forbid different coloured socks ? Didn't think so. :cowboy: Now hands up everybody who thinks that Madani is a big Tool ? Thought so . :rockin:

I guess that shows how successful the Grey Cup. Mr. Madani had to work really hard to find something to nitpick.

I guess he realizes that all professional leagues have a dress codes or should be striving for. That is why the players wear UNIFORMS. This applies to coaching staff and anyone on the sidelines too. The NFL hands out these kind of finds frequently. We have a dress code in the office here explained in black and white in our employee handbook. Those who violate it can be sent home without pay and greater deterrents if repeated.

Scenario b) players violate the dress code and the league is lax in its dealing and players can staff can do whatever they please.

Which one is more 'bush league'?

This is a non-issue. All leagues have dress codes. Minor infraction = minor fine. Move on.

Madani's next article will be about gitch violations. He was seen hanging around the locker room showers.

What a non-issue, as previous posters have already said.

What makes this article even more ridiculous, is that he somehow tries to make the article have a more negative spin, by tying it to the Orridge comment about concussions. Two completely different things.

I think he has some duel personality disorder, as I actually saw some tweets from him that would be considered positive about the league during Grey cup. Don't see that on anything he officially does with Rogers.

There is a good read here on why the players are fined.
Orridge was left with no choice, he had to fine the players or risk lucrative sponsorship money!

[b][i]"when the CFL fines a player for a uniform violation the associated team is notified of the violation and the information is never released to the media so the 'documents obtained' Wednesday are not some scandalous top secret file hidden from the public in order to shield you from how much the CFL hates your favourite player. Rather a standard day to day procedure which has occurred quietly for years with zero malicious intent whatsoever.

The number of violations was reported as excessive and irregular and that might be true on a comparative basis. However why wouldn't the league pay closer attention to dress code in a game wherein viewership sky rockets and brand apparel partner Adidas will be looking to ensure they get the most bang for their buck.

What is the CFL supposed to do when well over a dozen players wear Nike or Under Armour gear when Adidas is paying good money to be the exclusive outfitter of the CFL? Sit idly by and apologize to Adidas but gladly continue to take their money?

No, Orridge and the CFL had to act.

In a Grey Cup there are cameras EVERYWHERE. I could hear Bo Levi Mitchell's play call even though he wasn't wearing a live microphone. I could watch four different angles of Henry Burris reaction to the game clinching pass defended in double overtime and I could easily see that many players had gone rogue with their league mandated uniform."[/i][/b]

It's the media's job not just to report but also what to report.

Rogers does cover the CFL but they will frequently pump the tires of their properties and take aim at something in a negative light with something that's content for their competitor. So this is news in part because Rogers wants it to be news.

Now in terms of a bigger story tonight regarding the NHL - Rogers being the #1 media partner.

The Vegas Golden Knights have had their trademark application denied - weeks after the big launch and dropping 'Las' in the process. With all of the due diligence by both Foley and the NHL, could they not have had this bridge crossed before the big pow wow? This is much more of an embarrassing situation than people with mismatching socks.

BTW, TSN has this story on the front page of their site once the story broke....

Sportsnet...nothing until the league gives it's response.

Funny when the shoe is on the other foot

This is not exact breaking news, players have been fined for dress code violations for at least the past six Grey Cups. Other leagues are not immune to dress code fines, like the NFL which probably won't be the target of an upcoming 'Rash rant:

CFL fans are far more negative about the media than anybody in this situation. People got fined, Madani reported on it with quotes from Jeff Keeping. Keeping was the one who is upset that these fines came out a week after Orridge's dumb concussion comments, Madani worked it into his story because that is a worthy talking point.

I agree the league should fine these guys, and I also agree Madani should report on it.

What a lot of people want is CFL PR from all media outlets. Nothing "negative", everything sugar coated, do not talk about the elephants in the room. It blows my mind.

I can see 2 good reasons why the CFL & Orridge had to do something with this.

#1 Keep your biggest sponsor happy about enforcing the correct brand. The one that paid big bucks.

#2 Make the Refs job easier buy keeping the uniforms consistent. In a pile, I could see a mistake being easier to make if the players are wearing the wrong coloured socks - and you make the wrong call on the wrong team because of it.

IMHO - Arash does love to dump on the CFL, but he is getting paid for it. So in a way, he is doing his job. I'm more p'd off at his employer - Sportsnet / Rogers for doing it.

IMHO - non event, nothing to see here, move along

It may not be a big deal...but a non-event? Sure it is an event ..
these players are supposed to be "PROFESSIONALS" heres your uniform wear it ...how hard is that?

20 players can't even put on the right socks and the reporter is the bad guy?

Considering this has happened pracically in every Grey Cup, happens on weekly basis in every professional league and Madani choses to report this one only.

I guess not reporting on the other occasions and in other leagues makes him a 'bad reporter'.

Well you all keep reading his articles...so why would he change.

If I am a reporter covering the CFL - and I'm told that 20 players got fines for sock infractions - and I was able to confirm it was true - I report it - full stop. If I didn't - I'm not doing my job regardless of which media organization I work for.

It's not a big deal, not even a big story - and largely would have passed unnoticed here but for the usual insecure he's a hack - out to destroy us - Rogers is the evil empire - reaction.

It didn't pass here so to say because it was a CFL story and this is CFL forum. It's only natural it will be disussed with multiple points of view.

Again, if it's not a big deal and it happens often why report it? Why wasn't it reported when it happened last year and the year before that and so on?

Understand the messenger is doing his job and is doing it well. It's just kind of ironic the firm the message is coming from, but yet there was a bigger story concerning one that firms partners (NHL) others picked up on it right away yet this firm ignored it until the league had their statement. In this case Rogers was not reporting the story but merely being the voice of its partner.

That's what stood out to me yesterday more than the respective content. It happens with TSN/Bell too. It's clickbait more than news itself.