WHY – For all the marbles

You couldn’t have scripted it any better. Zach Collaros returning to face the team which he last took to the Grey Cup five years ago, two good friends at the helm in Orlondo Steinauer and Mike O’Shea, and individual award finalists galore.

This game is chock full of storylines, oh and the games probably going to be pretty good too.
These two teams met twice this season, with Hamilton taking both matchups. The first meeting came in week 7 at Tim Hortons Field. Interestingly, both teams lost their starting quarterbacks to injury after this game. Jeremiah Masoli tore his ACL during this game, while Matt Nichols was placed on the six-game injured list in August, before being shut down for the season in October.

The Ticats took that week 7 meeting 23-15. This was Dane Evans first taste of being the guy in 2019 and he started to settle in. He threw for 94 yards on 52% passing. On the defensive end, the Ticats made life difficult for Nichols, picking him off three times in the game. Jumal Rolle had two interceptions, while Tunde Adeleke got his first career interception. The win was nice, but the concern and uncertainty over Masoli was palpable. Hamilton was rolling and looking like one of the best teams in recent memory but now they were without their starting quarterback for the rest of the season. It’s crazy to think how far things have come since that moment.

In the second meeting between the Ticats and the Bombers came on the back end of the Ticats 3 game western road trip. This one wasn’t as close. Dane Evans had fully settled in as the Ticats starter and showed it in this game. He threw for 359 yards on 78.1% passing with three touchdowns and an interception. Brandon Banks had an MOP level night, catching all eight of his targets for 113 yards and a touchdown. The defensive line made things tough for Bomber’s starting quarterback Chris Streveler, sacking him five times. Julian Howsare had two, with Ja’Gared Davis, Cariel Brooks and Brett Wade all adding one for themselves. The pressure wasn’t the only thing that Streveler had to worry about either, Justin Tuggle and Jumal Rolle each picked off the Bombers quarterback en route to the victory.
This will be the ninth Grey Cup meeting between these two teams, with the Bombers having won five of the head-to-head contests. The last meeting came back in 1984 in Edmonton where the Bombers took home the 47-17 win.

Hamilton has had one of the most successful seasons in their franchise’s 150 year history. They set records in wins, home wins, all-star selections and they took home a total of four individual awards. There truly is only one thing missing.

Kick-off gets underway from McMahon Stadium at 6 p.m. EST in Calgary and can be seen on the TSN network.

Excellent job on your part though, C Man. I am officially pumped. ?

Let’s show Bummers "but…but…it’s been so long…we deserve this" is not a basis for anything.
Superior firepower is.

Let’s show Bummers "but…but…it’s been so long…we deserve this" is not a basis for anything.
Superior firepower is.

Absolutely, the Ticats have been a beast all year. I hope we destroy the Bombers today.

20 years is also a long time for a Grey Cup so the Winnipeg mentality of its been so long can spare us, lol

Let’s get it done Ticats!!

Remember last week and the weak “Why not us” from the Evil Empire? Winnipeg’s “it’s been so long” does not stand a chance. ?

“Why not us? Why not us? You can’t make up a saying in a week. That’s not culture, that’s praying”.

We have the culture. Our team is built for this.

That’s what happens when you start typing it at 12:01 AM last night. You look at your monitor and see the 24th…

Ahh today is the day, we need to set aside our differences and stand together as ONE And cheer for our ticats. OSKEE WE WE

“Why not us? Why not us? You can’t make up a saying in a week. That’s not culture, that’s praying”.

We have the culture. Our team is built for this.

I loved that. He said so much and I can only imagine what had to get cut out. I don’t now how opposing players keep their cool with him

Kudos to Crash for teeing up this thread! I will be hosting a small (read tiny) GC party here in MTL, so I don’t expect to be on this thread as much as I would otherwise while the action is on. We shall see…

It is safe to say that today is the most optimistic I have been for a Grey Cup berth translating into a championship for the Cats since 1998. The 1999 team went out West as an undercat (thanks) and the subsequent contenders at the dance have been not in that orbit. We should win this today if we play our game in all phases and take care of the ball.

I think of Paul Weiler today. I have met a lot of great folks over the years with this website, but it would have been great if he had been able to see the Cats win a championship with us.

We ALL deserve it. Bring home the grail, lads!!

One of my more inspired moments. 8) 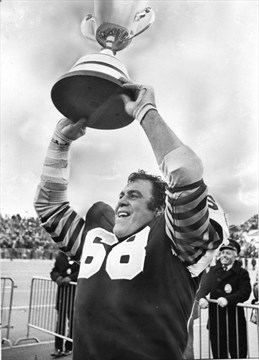 It chronicles the Grey Cup '67 parties in Ottawa. I hadn’t seen it before.

I’m gonna be ticked when the forums go down during the game. This is my outlet for snarky comments. Whoever is in the room with me will have to bear the brunt.