I'm starting this now, because I'm not sure if I will be back on before kick-off at 1:00.

Who: University of Guelph Gyphons vs. McMaster Marauders

Why: Winner hosts the Mitchell Bowl next week against the Canada West Champion

Where: Ron Joyce Stadium at McMaster University in Hamilton

McMaster has a chance set a new CIAU record of 20 consecutive wins as well as win it's 2nd consecutive Yates Cup and 6th Overall. Guelph is coming off an exciting come from behind overtime win against Queen's in last week's semi-final. After having only two wins last season, they finished second in the OUA this year with only one loss. Their one loss though was a 50-9 defeat at the hands of these same Marauders back on September 3rd. Guelph is looking for their 4th Yates Cup and their first since 1996.

Still early but looks like Mac might run away with this one, think they are a far superior team to Guelph,hope it ends up being a good entertaining game though

Thanks for starting off this thread, Doc.

After slow start for Mac where they went 2 and out and Guelph got a field goal on their first drive, Mac is now up 19-3 after they got their second TD of the game. The second quarter has just begun.

But Guelph has lost only one game so far this year, and you know that they had that big comeback last week.

Guelph forced to concede safety again, although it looked like Eisho had the pick before that.

But wait, Quinlan threw a pick, something he rarely does...

...but then Cupido picks it right back at the Mac 10! Right into the hands of the guy whose future may be in lacrosse!

Guelph's 3rd turnover of the game.

But Mac did not get any further that drive.

An iffy PI call against Mac in the end zone on 2nd down made it 1st and goal from the 1. Mac D stopped them short twice after that, but Guelph had to gamble on 3rd down. And QB Jazz Lindsey ran it in for the TD.

Well, I liked how that 3rd down and 1 gamble went! 20 yard gain on handoff when it looked like Quinlan would just push his way forward!

This has been a great game so far. Quinlan just got absolutely hammered forcing Mac to punt, Guelph would likely feel a whole lot better going into half down by 4 rather than 11.

Forgot to mention, how about Joey Cupido? Can you say CLUTCH. 11 picks in 8 playoff games. That's an incredible stat.

This has been a great game so far. Quinlan just got absolutely hammered forcing Mac to punt, Guelph would likely feel a whole lot better going into half down by 4 rather than 11.

Yep. Quinlan did not see that Guelph defender coming, was totally blindsided.

But Mac D forces 3rd safety concession after that, 23-10 Mac.

Forgot to mention, how about Joey Cupido? Can you say CLUTCH. 11 picks in 8 playoff games. That's an incredible stat.

Indeed. He almost got another one there.

Could you imagine if DiCroce had played the whole season? This Mac offense would have been THAT much scarier. DiCroce is a great talent and a Hammy boy to boot.

Could you imagine if DiCroce had played the whole season? This Mac offense would have been THAT much scarier. DiCroce is a great talent and a Hammy boy to boot.

I do like seeing that Bishop Ryan grad make defenders miss in pick up yards after the catch.

3rd down gamble by Mac, less than an inch short.

Guelph has enough time to get to FG range.

Nice coverage by Cupido on the first play, but they get FD after that.

Guelph RB Farquharson being injured in going off is bad news for Guelph.

But Guelph gets another FD after that.

Going to be close, Guelph probably needs atleast another 10 yards before they can attempt a FG.

Going to be close, Guelph probably needs atleast another 10 yards before they can attempt a FG.

And they don’t even get to attempt one as Cupido knocks one down, then deep pass well short of TD, then half ends (prevent defence called there?)

Guelph wasn’t going to be easy to beat.

A good game so far, and I expect the second half to be good as well.

Guelph is playing a damn good game and if they could have minimized the turnovers in the first half they might even be leading this game.

257-187 net yards for Mac, but Guelph has 1 minute time of possession advantage.

Ptaszek giving his team a talk at halftime: 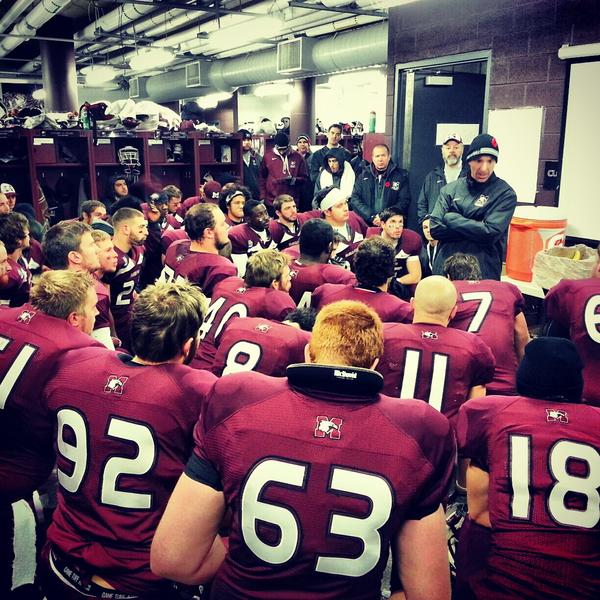 Quinlan throws near-pick on 2nd and 3, then Guelph gets return to their 40.

Guelph gets FD on first play after that.

They won't be easy to beat, as I said.

That's an amazing photo. A TD for Guelph here could make this game very very interesting, although if last week says anything, there is lots of time left for this game to get interesting.